Tinu Pappachan's film is a feast for staged chaos that erupts with all the visual splendour and violence of a drunken brawl.

There is something about chaos that makes it entrancing. Traditional Indian dance forms have always expressed it as the climactic element of a performance, as it is in the subcontinent's philosophy. In Tinu Pappachan's film, chaos becomes the central factor for every event and plot movement. Like his mentor Lijo Jose Pellissery, the filmmaker uses chaos to stage some impressive action sequences that entertain and enthral. Everything else is inference and interpretation; the only thing certain is the explosive mix of the right environment and an element of chaos. 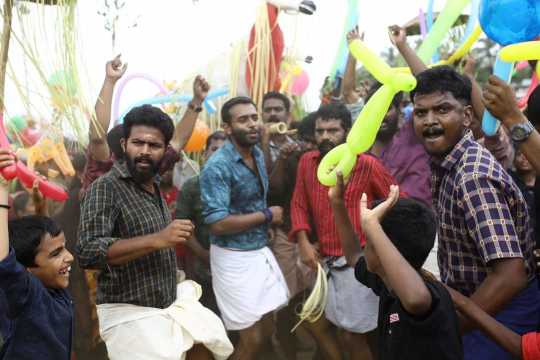 A village temple festival demands the presence of an elephant. Lali (Antony Varghese) and Ambi (Kichu Tellus) arrive with the kindly Parthan to celebrate the festival. A loose cannon, Lali lights a spark by scuffling with some local boys. Humiliated and seeking revenge, the boys call for reinforcements to teach these 'outsiders' a lesson.

This plot may seem flimsy but is immensely relatable and entertaining. The idea of a village temple festival in India is not so much religious as social. It is the occasion for people to indulge openly, without repercussions, and is often a hotspot. Yet, there is something primal about it. The director uses the lights, colours, masks to set up a theatrical stage for this violence. It is palpable from the first scene of a group of masked Yavanika performers arriving for the play of Sugreeva. 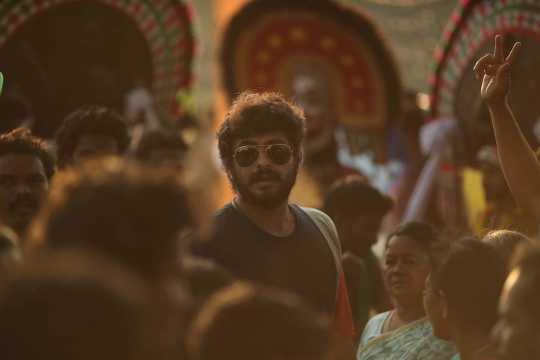 There are some elements like the subplot of Kachambar Dasan (Sabumon Abdussamad) and the drama troupe which add only to the humour. The performances of Antony Varghese, Kichu Tellus and Arjun Ashokan are fabulous. Antony's mercurial wildness is the perfect foil for Arjun's calculated menace. The two actors play their parts with ease and conviction. Their movements, anger and intensity drive the film. Vineeth Vishwam and Sudhi Koppa add to the mix with their unique characters. The film is dotted with distinct personalities who add to the storyline. Despite all the randomness, there are memorable moments that highlight the story.

Tinu Pappachan also uses the underlying theme of animalism through the visuals and the script. The characters move in herds, the action is almost animalistic in its violence and expression. Jinto George's cinematography deserves mention for capturing some sublime moments. At times, the film feels like a surreal trip on a drunken, hazy afternoon.

The only real animal in the film, the elephant, acts with serene rationality and logic. It is loyal to a fault, and constantly at the mercy of its wild, maddened owners. This contrast makes for an engaging watch. 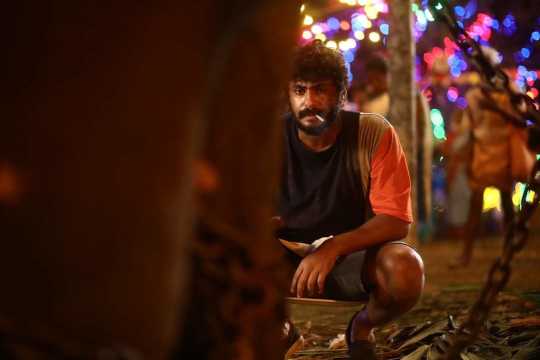 Despite the plot being basic and flimsy, the film never loses the taut tension throughout its screenplay. Kichu Tellus and Vineeth Vishwam (screenplay) stage the random chaos with efficiency. While the actions and reactions are predictable, they are still entrancing. Throw in Jakes Bejoy's fantastic mix of folk/traditional music and Justin Varghese's background score and you have an experience on the screen.

Ajagajantharam deserves credit for building an enthralling film on a fairly skinny premise. The rootedness of the story and its characters make the premise relatable while the film derives its power from its action, the staging and the presentation of chaos with vivacity. This is an entertaining film by a promising team.

Ajagajantharam was premiered on SonyLIV on 25 February.