Ahaan review: Dreams of a young man with Down's syndrome take wing in this heartwarming tale

The film addresses, simply and with love, the dominant tendency of depriving special children and adults of a normal life.

Featuring Abuli Mamaji, who has Down's syndrome in real life, Arif Zakaria, Niharika Singh and Plabita Borthakur, Ahaan constantly reminds us that special children and adults can contribute a great deal to their surroundings, only if they are allowed to do so.

Ahaan (Mamaji) is aware that despite being an adult, he has to abide by the boundaries set by his parents. His father makes sure to remind him he is not fit to attend social gatherings or picnics; yet he cheers from his balcony with an active sense of participation the boys playing in the building compound below. He is expected to feel content helping out in his mother’s business endeavours from home, but he refuses to dream small.

The film repeatedly and consciously highlights Ahaan's dreams, when he shares them with his caretaker and friend Hari, his neighbour Anu (Niharika Singh) and her husband Ozzy (Zakaria), who has a severe case of OCD (obsessive compulsive disorder). 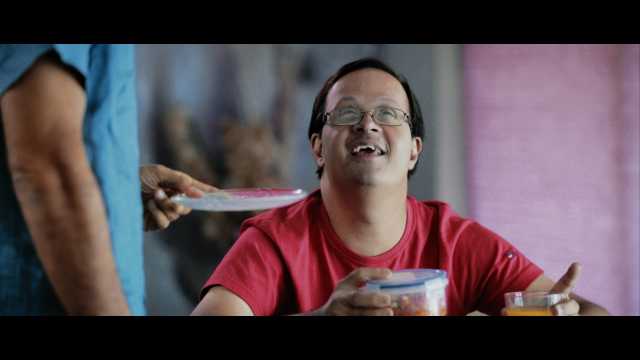 Ahaan’s simplicity initially unsettles Ozzy, but then the narrative takes such a turn that Ozzy has to put up with all of Ahaan’s habits that he initially detested. His self-obsession and inability to face his own complications are challenged when faced with Ahaan’s kindness and ability to respond to life with love.

The ingenuity of the story lies in the idea of bringing Ahaan and Ozzy together. As the narrative progresses with humour and entertaining twists, Ahaan and Ozzy complement each other’s journey, lending meaning to their respective existences.

The film retains its simplicity till the end, addressing the dominant tendency of depriving special children and adults of a normal life and, at the same time, shows that it is possible for people to take the responsibility of giving them platforms to pursue their dreams.

While Abuli Mamaji brings alive the beauty in Ahaan’s character with a gentle countenance and depth, Zakaria does full justice to Ozzy’s eccentricities with minimal expressions which also bring out the transitions in his journey. However, we never really get to know the root cause of his obsessions.

Rajit Kapoor shines in a brief appearance as a strict counsellor with weirdly ingenious ideas. However, the rest of the performances could have been more nuanced and dedicated.

Saket Gyani’s camerawork thoughtfully brings out the essence of Ahaan’s solitary world, despite all the love and attention showered on him. The camera thoughtfully singles him out from the crowd to remind us that he is special.

Ahaan serves its purpose of conveying a social message with enough light-hearted and feel-good moments. By incorporating Ozzy, the director also clearly states that it is important to fight our own evils before we get out to fight larger social evils.

Ahaan is now availlable on Netflix.