Despite the hype, the film is a largely predictable action drama that needed better writing.

After delivering four highly enjoyable commercial entertainers laden with social messages — Mirchi (2013), Srimanthudu (2015), Janatha Garage (2016) and Bharat Ane Nenu (2018) — filmmaker Koratala Siva has returned with the highly anticipated Acharya (2022), which unfortunately is his weakest work. In spite of all the hype, the film is a largely predictable action drama that needed better writing.

The story is set in a fictional temple town called Dharmasthali where wannabe MLA Basava (Sonu Sood) rules with an iron fist. Despite carrying out a range of illegal activities, nobody dares to lift a finger against him. Padaghattam is a settlement that is separated from Dharmasthali by a river. The people of this village are helpless and hope to be rescued from the clutches of Basava. 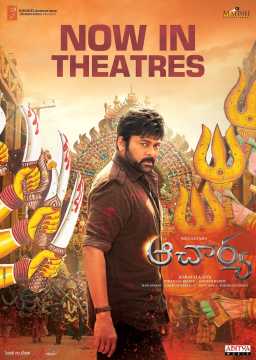 One day, Acharya (Chiranjeevi) visits Dharmasthali. He looks like just another ordinary guy passing through the town. At night, he turns vigilante to clean up the village. Meanwhile, the forest of Siddhavanam catches the attention of a businessman called Rathod (Jisshu Sengupta) who wants to encroach on it for illegal mining. But Siddha (Ram Charan), a gurukul student looks after Siddhavanam and he poses a great threat to Rathod. What happens when Acharya and Siddha join forces and what is the connection between them?

Acharya is undone by mediocre writing. The film possesses no surprise element to keep you engaged. The film wants the audience to wonder about Acharya’s identity and what brought him to Dharmasthali. 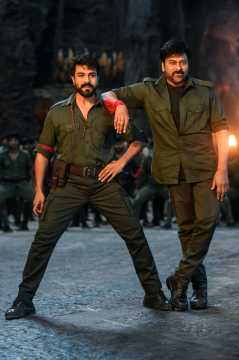 But the promotional material already revealed that he’s a Maoist; therefore, when his real identity is revealed, it isn't exciting. Also, most of the scenes are predictable so you can easily guess how it will end. Despite both Chiranjeevi and Ram Charan trying their best efforts to keep the film afloat, Acharya fails to live up to the hype and struggles to keep the entertainment factor alive.

The sub-plot involving Ram Charan is more exciting than the one involving Chiranjeevi. But the scenes involving both of them are probably the film’s best moments. Unfortunately, you’d hope for a better film featuring both of them, because this isn’t something that happens very regularly. Acharya doesn’t live up to the expectations one would have from the combination of Chiranjeevi and Ram Charan.

While the core idea of the film is exciting and its visuals are breathtaking, the weak screenplay...