Abharkha review: Pensive look at the hopes and wants of a village schoolteacher and her student

The black-and-white Gujarati film, written and directed by Himadri Parmar, is a quiet, insightful feature about lives laid bare.

A small village school in Gujarat holds many stories, of the students, their parents and the teachers. Himadri Parmar’s Abharkha, meaning desire, looks at the worlds of Mira, the mathematics teacher, and Milan, a young student.

The Gujarati film takes us into their lives, both at school and home, and we learn more about the troubles that ail them. After a long day at work, Mira (Rinkle Patel) has to cook for and tend to her in-laws. Her husband Parth resides elsewhere for work. When he does return, he is indifferent to her needs.

At school, she faces errant students, including Milan (Milan Bhil), who abruptly leaves to go back home after recess practically every day. The boy lives with his mother; the father has abandoned them. The stoic lad is protective of his mother and extremely fond of the blind music teacher, Girish sir (Girish Mewada).

Milan, who likely finds a kind, father figure in Girish sir, is devastated to learn that his music teacher is leaving to go on the television quiz show Kaun Banega Crorepati. The reticent child even volunteers to sing a farewell song for Girish sir at a cultural function for the entire school.

The dutiful wife and daughter-in-law Mira finally asks Parth about his disinterest in her, only to face more barbs. Mira’s story reminded me of the Malayalam feature, The Great Indian Kitchen (2021), as the household sat around while she did most of the housework while handling her job as well. 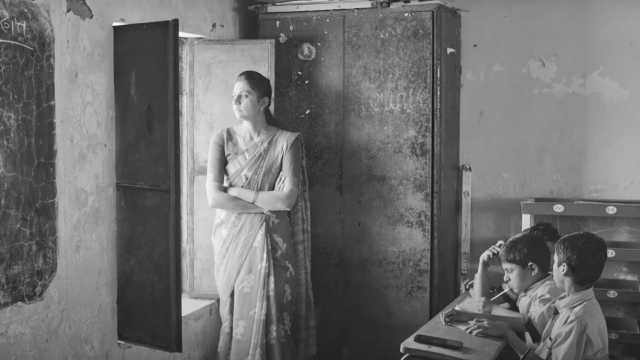 They are kindred tales of women trapped in marriage, with no one asking after their needs and hopes. In many instances, Mira is framed at the edge, showing her isolation in the crowd and conveying her feelings of being stifled. But no matter what she does, she can’t escape.

Meanwhile, Milan is content with little. Rarely complaining, his piercing gaze observes all. He and his mother face harsh times but make do with the little that they have. Shot in black and white, Abharkha depicts the scant colour that is present in their worlds.

The cast of Abharkha seems to comprise first-time artistes and their naturalness aids in making the story feel engaging. The rare scenes in which Milan does break out in a smile feel like a reward; a young boy like him shouldn’t be as morose as he is, with the weight of the world on his shoulders. 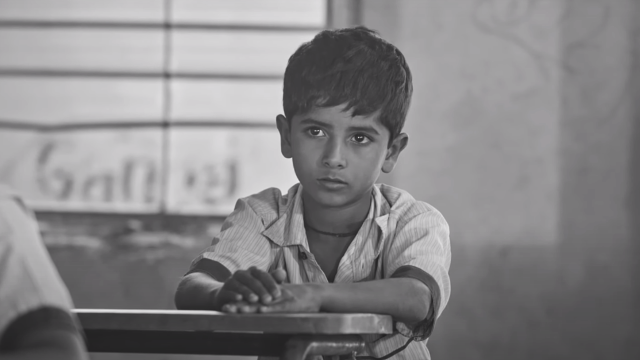 Cinematographer Hardeep Sachdev employs long takes as the daily routines of school, from the assemblies to class lessons, are shown. The score by Anjo John is upbeat and hopeful.

There is promise and heart in Parmar’s debut. She sets the background of the tale well, with folk songs and stories enacted endearingly by the schoolchildren that appear often in the film. I also enjoyed the humorous moment regarding the daily wear of a mischievous student, Tapu.

But I would have liked to have known more about Girish sir, the enigmatic teacher who seems to be a favourite for many. Additionally, we leave Mira and Milan too soon as they continue in their quiet lives, with little promise for the future.

Abharkha was screened virtually from 26–28 February at the 22nd MAMI Mumbai Film Festival. The Gujarati film was part of the official selection for the festival’s 2020 edition in the India Story section.

The producer-director duo of Rashmin Majithia and Vipul Mehta have come up with a film that is very...

110 review: Kavin Dave excels in this light-hearted show about an RJ

The four-episode show has a smooth narrative arc with regular doses of humour even while keeping the...

The visually arresting Gujarati web-series on adolescence and first love is noteworthy....