Appa Ani Bappa review: You need Bappa’s blessings to sit through this

Besides being full of plot holes, the film bombards you continuously with loud dialogues, poor jokes and juvenile behaviour.

A different category of light-hearted supernatural films has been on the rise where a god or deceased person worthy of worship returns to enlighten the protagonist. This worked well in films like Mee Shivajiraje Bhosle Boltoy (2009) and OMG: Oh My God (2012).

In recent years, Marathi cinema has tried this also in Deool Band (2015) and Thank U Vitthala (2017). Director Ashwni Dhir continues the trend in Appa Ani Bappa.

The story is set in Pune where Govind Kulkarni (Bharat Jadhav) lives a strictly middle-class existence with his father (Dilip Prabhavalkar), wife and two children. Govind has been hearing taunts from various people throughout his life, including his family, for being a loser. He works in a sweets shop where his boss, too, is always berating him.

When Ganeshotsav is just around the corner, Govind’s father decides to celebrate with great fanfare by withdrawing money from his fixed deposit (FD). They spend a bomb on credit, thinking they will pay after they get the money from the bank. However, the bank officials delay the withdrawal under one pretext or the other. Just then, Vinayak (Subodh Bhave), a stranger, enters Govind’s life to guide him.

The problems with Appa Ani Bappa begin with the plot itself. The excuses given by the bank for not handing over the FD amount are silly, to say the least. Govind’s father has his Aadhaar card and all other documents, but he is still not paid his own money because he doesn’t have a birth certificate. When they somehow get it done, the officials ask for proof that the senior Kulkarni is indeed the real senior Kulkarni!

Strangely, they initially refuse to pay because their customer VJ Mallya has run away to a foreign country after robbing them off Rs300 crore. But at the same time, the bank officials literally worship Mallya’s picture with garlands. Why would you do that? 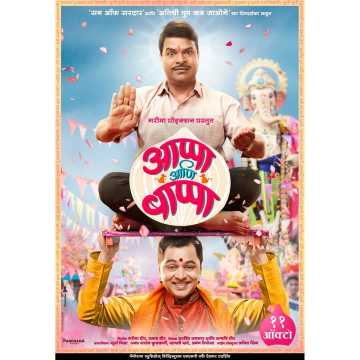 Bhave plays lord Ganesha whose characterization is weird and confusing (good lord!). He is visible only to Govind and invisible to his family members as well as people outside. However, he becomes visible to others when he enters the bank. His fallacies don’t end here. Looks like writers don't spare even the gods these days.

While watching the film, you don’t get much time to think about these silly mistakes because you are continuously bombarded with loud dialogues, poor jokes and juvenile behaviour. The film is laden with lines that nobody can find funny except the writers (which also we doubt).

What takes the cake in absurdity is the bank staff, which is more childish than primary school students. Special mention must be made of the supporting actor playing Rajkumar who makes you wonder what he is doing here.

The content makes quality performers like Prabhavalkar and Jadhav get into the overacting zone from time to time. The less said the better about the rest of the supporting cast.

The only sensible actor here is Bhave who succeeds in creating the aura of a god. But more than applauding his act you question his choice of doing this film. In fact, barring a few films like Ani… Dr Kashinath Ghanekar (2018) and Hrudayantar (2017), Bhave's choices (except the guest appearances) have been unimpressive over the past few years.

Of all the previous films made in this genre, Appa Ani Bappa appears most similar to OMG: Oh My God. The makers have tweaked the storyline and added their own inputs. But we wish they had just copied the 2012 movie as is. It would at least have been tolerable then.