A Thing Of Magic review: Two young sisters are transfixed by a pair of 3D glasses in their small village

First-time filmmaker Nithin Anil captures the unhurried pace of village life and the simple pleasure of just being in his debut film.

A Thing Of Magic opens with a dedication to filmmakers Jafar Panahi, Abbas Kiarostami and Rima Das. Nithin Anil's directorial debut is set in a small village of Maharashtra where nothing much of import happens, until it does. The villagers know all about their neighbours' lives, good and bad. There is not much you can hide here.

Sisters Prateeksha (Vaibhavi Pramod Kadam) and Pradnya (Pradnya Parshuram Kadam) are friends with Gundu Kaka (Harshad Baliram Kadam), a harmonium player. While the village elders regard him as a good-for-nothing who hasn't done much with his life, the young sisters are always filled with curiousity about him and his activities.

One day, he shows them a pair of 3D glasses, made out of paper, and says it contains magic. Intrigued, they want to watch a 3D film now. Eventually, Gundu Kaka gives Pradnya the glasses. She believes the glasses have magical properties and begins to look at life around her in new ways.

The sisters squabble over the glasses and the natural curiosity of everyone towards what 3D is lead to them being nearly torn, but with some staples, they are held in place again. 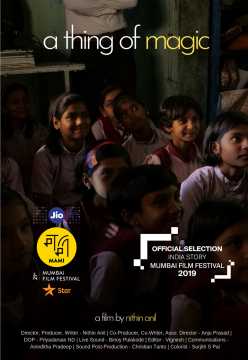 The storyline of A Thing Of Magic is quite bare actually. The film is made up of moments in the village, and it allows us to participate in the daily goings-on, especially the carefree life of the children. Modern technology hasn't overtaken their lives here yet, and it's kind of rare to see that.

Moreover, the audience is given a unique perspective as cinematographer Priyadarshan ND and his camera become another villager, observing from the sidelines or right in the middle. Sometimes, the camera lingers on certain scenes a beat longer than it should.

This slowness might bother some, but we forget that the pace of village life is much slower, leisurely even, compared to that of us stressed city dwellers, who have little patience for things in life. Nithin even includes a shot of the sun setting, a daily occurrence for which we usually don't have time.

The film incorporates minimal music and uses natural light and ambient sound to make its point. The cast is made of the residents of Arale, Maharashtra, the village where the film was shot. They are all first-time actors and actresses and their spontaneity adds both innocence and charm to the film. These characters genuinely care for another.

A Thing Of Magic has been made with a small crew, on an extremely low budget. Like the message of Pixar's Ratatouille (2007), it proves that if you have got enough determination, you too can make a film.

A Thing of Magic was screened at the 21st Mumbai Film Festival on 19 October 2019. Repeat screenings are scheduled on 20 October and 24 October.