Experimental, visually beautiful, with some good performances, 99 Songs trips up on the hurdle of trying too much too soon.

Music is the last surviving magic in this world, says Manisha Koirala's wise counsellor in one scene. There could not be more definitive proof that this is a story written by a composer. AR Rahman's screenwriting debut has the grand musical score to back the idealistic dreams of a musician but trips up on its grandiose abstractions and a ladle of clichés.

Jay (Ehan Bhatt) is an aspiring musician in love with his muse, Sophia (Edilsy Vargas). Mute, talented, and with very little space in the story, Sophia is the source of Jay's inspiration and passion. While music drives them, Sophia's father (Ranjit Barot) declares that he cannot let his daughter marry a musician. At least not until he is successful. "Write one song or a hundred to change the world before you think of Sophia," he tells Jay. And so the drama begins. 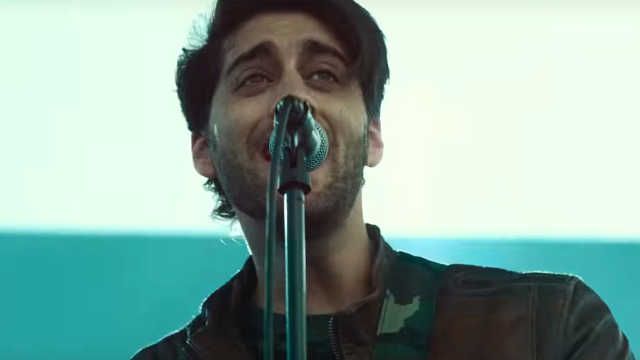 The story is filled with several stereotypes — conflicted, struggling artiste facing off a materialistic, selfish world, ruthless father standing in the way of love/dream, a friend who makes a bad decision, a mysterious woman with a golden heart.

Ehan Bhatt does well to portray the sincere, talented Jay burning himself up to create his art. He is well supported by Tenzin Dalha as his friend Polo. The film sidesteps Edilsy Vargas's accent troubles by portraying her as a mute dancer/designer. This does rob the character of some expression and, thereby, empathy.

The film does well as long as it stays with Bhatt's brooding Jay. His journey to Shillong and his meeting with the mysterious and musical Sheila are among the more interesting parts of the story.

Few Indian musicals throw up references to Oscar Peterson and George Gershwin. There are some lovely shots of the music-making process that can only be conceived of by those familiar with its nuts and bolts. An example is the conversation between Sheila and Jay, where they keep adding notes to complete a composition. Both director Vishwesh Krishnamoorthy and writer AR Rahman are musicians more than familiar with these elements.

What the story lacks is the depth of emotion and character evolution. As part of Rahman's moral code, Jay is constructed as a character who does not drink, smoke, or indulge in any vice. The lack of flaws, or even pride, makes him difficult to relate to. A story is bound to fail in the absence of an emotional connection with the characters.

On the other hand, Jay's music-hating father (Diwakar Pundir) comes across as a more relatable, flawed character in the short but salient back story.

Too many heavy, idealistic themes are slid into the story and screenplay. The second half feels all over the place with the realistic elements clashing with the visual abstraction in the sequences. These feel burdensome and unconvincing, particularly towards the end.

The dawdling nature of the screenplay is another issue that drags the film down. While the abstract nature of the musician's imagination is understandable, there are too many visual cues that aim to stand in for efficient writing. The high production values and rousing thematic score help alleviate the film. But the problem of slack tension in the drama remains.

Undeniably, Rahman has scored the music well. The VFX, cinematography and performances hold the film together. Vishwesh's direction brings an artistic sensibility to the story, complete with the visual cues. Music might be powerful magic, but cinema only works when all the elements come together.

99 Songs is now available on Netflix and Jio Cinema.

Skater Girl review: An overly optimistic, life-affirming tale that has its heart in the right place

Manjari Makijany's film showcases the coming-of-age struggles of a teenage girl in an Indian the...

Sunflower review: Goofy comedy disguised as murder mystery is neither funny nor gripping

The eight-episode web-series is banal, lacks depth and has supporting characters that serve no apart...