7 Kadam review: A sincere tale about father and son that scores on the emotional pitch

K Mohit Kumar Jha's short series is led ably by Ronit Roy and Amit Sadh but fails to rise above its stereotypical nature.

The Eros Now series, 7 Kadam, which is set in the football-crazed state of West Bengal, is an emotional tale about father and son. Despite some able performances, the series does not rise above its stereotypical nature.

Aurobindo Pal (Ronit Roy), a former football player, is now a hobbling part-time coach who still dreams of winning the national league. He has instilled this dream into his 22-year old son, Ravi (Amit Sadh). The father and son, who come from a middle-class background, also dream about owning a house. Despite their troubles, Ravi's skill on the football field, and Aurobindo's hope of making him India's best player keep them going. When Aurobindo gets a chance to coach Asansol 11, he sees it as a way to live his dream through Ravi. However, Ravi's heart is set on striking it big and providing for his family. 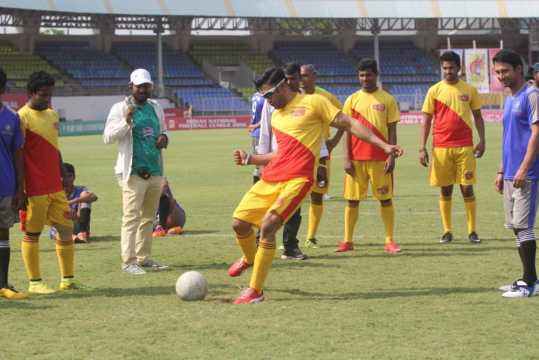 Jha's screenplay focuses on Aurobindo and Ravi's relationship and contains a hidden twist that adds to the drama. Roy and Sadh are able and hold the emotional thread of the story well. While Sadh feels miscast as a young rising talent, Roy seems to have found his niche as the gruff flawed parent with a tender heart. The difficulty of being a distant parent and the closeness of an elder brother and his sisters is also well explored.

The music by Harshit Saxena and Raajiv Mitra lend emotional weight to the story. The songs are pleasant but occasionally feel like an encumbrance, interrupting the flow of the story. Nevertheless, they are worth a listen and possess some lovely lyrics to boot.

Sadly, this is limited. Perhaps it is the four-episode duration that prevents Jha from deeply exploring relationships or elaborating on the technical details of football. In order to establish the importance of the characters in a short time, the director resorts to some stereotypes that have been around since the 1980s. The precocious younger sister, the father who nurses unfulfilled dreams, the compassionate mother and the soon-to-be-married sister who is dealing with a dowry problem are among them. The eventual revelation of Ravi's secret and Aurobindo's struggle also feel like tropes. In addition to these, the character's heavy Bengali accent feels put on.

Deeksha Seth, as the chirpy girlfriend, brings a lightness to the story, as do Shilpi Roy and Niharika Roy who play Sadh's sisters. These characters add to the emotional texture of the story. However, the linear narrative of Jha's tale is as predictable as it comes. An idealist father who has eschewed fame and fortune is contrasted with his ambitious son who seeks his fortune through the sport. The arrival of Babul Banerjee (Ashok Singh) feels ominous, but the character is underdeveloped. He is the rich antagonist to Aurobindo's idealist. He steals away Ravi to avenge a wrong in his past. Yet, after the key revelation, the story does not reveal if he is still vengeful. Neither does the script allow him to seek redemption. It feels like a loose end.

7 Kadam is a sincere tale of a father and son who bond through football. It is not a story about football, or about people who love football. It is more about the family, the struggles of a father and the ambition of the son. If that is all you seek, this is the short series for you. Football lovers might be a little disappointed.