Article 19 (1) (a) review: Daring debut in the times of increasing gags on free speech

Indhu VS makes an assured first feature with the political and artistic Malayalam-language film.

When the largest democracy framed its constitution, the first fundamental right recognized was the freedom to speak and express oneself freely with Article 19 (1) (a). In a post-truth era tilting towards far right extremism, this is one of the foremost rights that faces constant threat. It is in this context that Indhu VS has wrought a political and artistic film that brims with ideas and philosophies.

The Malayalam film Article 19 (1) (a) revolves around writer Gauri Shankar (Vijay Sethupathi) and an ordinary young woman (Nithya Menen), who travels daily from her home to a Xerox shop owned by her father where she works.

In a case of fiction mirroring reality, the writer is portrayed as someone who writes responsibly and we see the consequences of that in what happens. However, the way things happen before and after and how an ordinary girl gets involved in it is what make this movie a refreshing take on contemporary times and pressing issues.

Despite having limited screen time, Vijay Sethupathi has done a commendable job. Nithya’s character portrayal could have been deeper if the traits of an ordinary mid-south Kerala girl were incorporated in terms of dialogue delivery and outward appearance. Indrajith Sukumaran, who essays the role of a publisher and friend of Gauri Shankar, and Sreekanth Murali (the protagonist’s father, Gangettan), deliver convincing performances.

The chemistry between Indrajith and Sethupathi, though brief, is amazing. Indrans, who plays the police constable Mohan, as usual, is perfect. As are Bhagath Manuel (Comrade) and Athulya Ashadam who plays Fathima, the protagonist’s friend. It is also heartening to see members of the Women in Cinema Collective (WCC) such as Divya Gopinath on screen again - a beautiful way of depicting Article 19 (1) (a) being practised and protected. 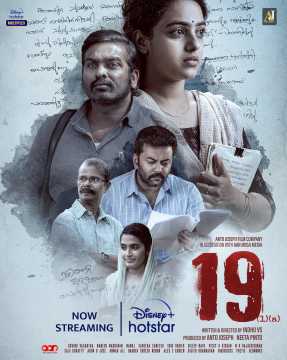 Cinematographer Manesh Madhavan has beautifully captured the specificities of a particular geography, people and time. Govind Vasantha’s music, though unsettling in the beginning, syncs and becomes poignant and inseparable from the visual experience offered by the movie as takes a serious turn  during the first half.

The director's ingenuity is evident from her effort to abstain from stating the obvious. The use of sound is another factor that makes this film engaging. Indhu VS has succeeded at using sound to fill in the voids that she carefully created with her sense of restraint.

The theme of freedom of speech and expression within domestic spaces between an estranged father and daughter and within the religious and political spheres pervades the narrative. Though much curiosity is generated about the protagonist’s past, the film does not tread into this terrain much.

Politics of writing and the complexity of writing politics, the voice of the suppressed, the unfathomable dimensions the colour 'black' has amassed, and protest against hegemony - these complex concepts are dealt within the movie. This movie is all about subtlety; saying without saying for those who see instead of merely looking is conveyed through emphatic shots and terse communication interspersed throughout the narrative.

A film becoming overtly political and less artistic can be catastrophic. To find that right balance is like walking a tight rope. Indhu VS with her daring debut has done quite an impressive feat in that regard. This is just the beginning for her.