14 Phere review: This social comedy drama is all over the place

When Amrish Puri let go of Kajol's hand over 25 years ago and said, "Jaa Simran jaa, jee le apni zindagi [Go Simran, go, live your life as you wish]", millions of young couples probably hoped and prayed that their parents would also have a change of heart. We are in 2021 now, but the situation of young lovers in India hasn't changed much. In fact, some might even argue, things have become worse.

Aditi (Kriti Kharbanda) and Sanjay (Vikrant Massey), the lead pair in Devanshu Singh's social comedy 14 Phere, are well aware that their fathers won't have a change of heart at the last minute like Simran's in Dilwale Dulhania Le Jaayenge. In fact, chances are that both will be gunned down. Sanjay's father, Kanhaiya Lal Singh (Vineet Kumar), is an influential bahubali (strongman) and wants his son to get married to a girl from their caste. Aditi is a Jat from Jaipur and her father (Govind Pandey) also won't allow her to marry outside their caste. For them, the supposed family honour is more important than their children's happiness.

So the lovestruck couple comes up with an elaborate plan to arrange their love marriage. The plan requires a fake set of parents. Their search ends with Amay (Jameel Khan), a disgraced theatre actor who has stopped acting after an embarrassing incident on stage, and 'Delhi Ki Meryl Streep' Zubina (Gauahar Khan), who plays a small supporting role of an old mother in Delhi's experimental theatre.

But getting fake parents is not enough. They need to arrange for fake relatives, for which they enlist the help of their co-workers, and fake kundalis (horoscopes) too. Then they have to set up a meeting between their actual parents and the fake set of parents.

The premise is ludicrous, which is still fine because the film never tries to claim to offer a realistic depiction of the caste problem. But at the same time, is it too much to ask for a film that seeks to address caste discrimination to do it in a little more sensible manner? Writer Manoj Kalwani has reduced a social evil like caste discrimination to a mere passing mention.

The writing is too simple and things work out in the couple's favour all too often. Whenever the couple is facing some danger, the screenplay throws up a quick-fix to solve the problem. The film is too kind on its lead characters, which greatly reduces the drama. Even when things hot up, the general tone remains light-hearted.

Like the lead couple, the film also seems to be in a hurry to get done with things and move on.

Even when things become a little serious towards the climax, the unnecessary comical element ruins what could have been a strong emotional moment with a social message.

What's worse is that for the most part the comedy does not land well, partly because of the poorly written script and partly because of the artistes. All the supporting characters come across as poorly written versions of similar characters from other films on similar subjects. An evil father who doesn't mind killing his offspring to save his 'honour', a servile mother who has no say in any matter, a younger brother trying his best to help the couple, all this seems too familiar.

The problem, however, is not with the derivative nature of the characters. When a film is set in a certain time and place, some of its characters are bound to overlap with those from other films exploring the same theme. The problem arises from the banal manner in which these characters have been written.

Take the example of Jameel Khan and Gauahar Khan's characters. After the lead couple, they have the most prominent roles, but the film refuses to let us know anything about them. After their introduction, we learn nothing about them for the rest of the film's runtime.

There is a huge age gap between Zubina and Amay. This simple thread alone could have been a base for many jokes and much banter. The generation gap between the two, their different approaches towards acting, all these could have been used by the writer to add some layers to their characters and create some funny moments. But we learn nothing about them throughout the course of the film. Just because the film is about two lovers doesn't mean others don't deserve any character development. 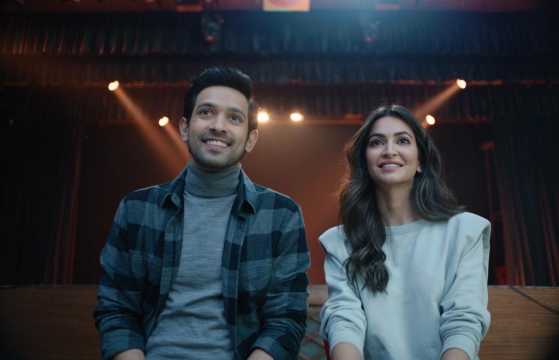 Kriti Kharbanda and Vikrant Massey are good artistes, but somehow you just don't feel the chemistry between them. Aditi and Sanjay are supposedly in a relationship since their college days. When a couple are in a relationship for years and still deeply in love, there is a certain comfort level with each other, but director Devanshu Singh fails to translate it on the screen. Kharbanda looks pretty, but that's about it. Her character has hardly anything to do. And this might well be Massey's easiest role.

The same goes for the real sets of parents and friends. None of the supporting characters has anything significant to do in the film. When the writer hasn't put much effort into creating interesting characters, why should the artistes playing those roles put in extra effort? Jameel Khan tries his best with what he has got, but Gauahar Khan struggles, especially in the comic scenes.

The film is not a totally wasted attempt. It does have its moments, but they are few and far between. It might not completely bore you, but it does leave a lot to be desired. 14 Phere is the kind of film that makes you wonder what could have been, which is never a good sign.

14 Phere is now available on Zee5.