Arifin Shuvoo's look in Shyam Benegal's Mujib: The Making of a Nation revealed


The epic film depicts how the leader emerged as the founding father of Bangladesh.

The first teaser poster of the film was unveiled on 17 March, commemorating the closing ceremony of the birth centennial of the great leader.

Mujib: The Making of a Nation is an India-Bangladesh co-production on the life of Sheikh Mujibur Rahman, the founding father of the nation of Bangladesh.

In the poster, Shuvoo, as the enigmatic leader, can be seen waiving at a huge crowd, to whom he is about to deliver a speech.

“We are revealing the face behind the hand in the follow-up poster of the film,” said the award-winning director.

“Arifin has worked really hard and I hope audiences will definitely love him and his look. The audience will experience Mujib’s journey soon. I am thankful to the NFDC and BFDC [Bangladesh Film Development Corporation] for their great support throughout. Greetings of Eid to all,” he added.

“Eid is an emotion for us, so is Mujib,” said Shuvoo.

Speaking of his journey of working in the film, the actor added, “Though I am so delighted to play the role of Mujib, it was an extremely temperamental journey for me. It’s a feeling that cannot be expressed, I hope the audience will endear my look and shower their love. Joy Bangla.” 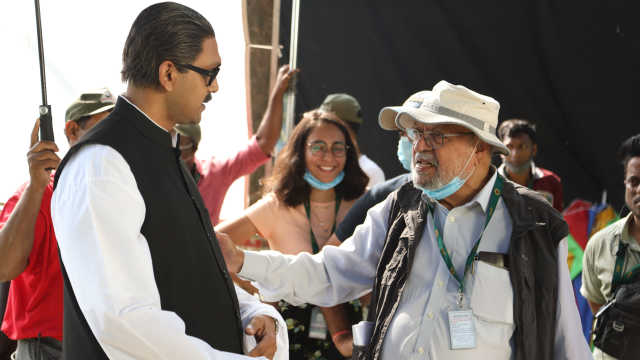 Actress Nusrat Imrose Tisha will be seen as Mujib’s wife Sheikh Fazilatunnesa Mujib, who was also known as Renu, in the film, which will highlight her struggles, strengths and contribution to Mujib’s political career.

“For me, it is a service to the nation. Playing Renu is a once-in-a-lifetime opportunity and being directed by the stalwart filmmaker Shyam Benegal is the icing on the cake. It will definitely be a monumental film in Bangladesh’s history,” said the actress.

Nusraat Faria Mazhar essays a young Sheikh Hasina, Mujib’s daughter and the incumbent prime minister of Bangladesh, in the film. “My happiness knew no bounds when I was told I’ll be playing the young Sheikh Hasina,” said the actress and singer. The film will depict Hasina learning from her father. The role came with a lot of responsibility.  I am really grateful I could do my bit in this epic biopic. I am anticipating the release soon and hoping that the audience will admire my role,” she said.

Ravinder Bhakar, managing director of NFDC India, stated, “Mujib: The Making of a Nation is an important film for both India and Bangladesh. A humongous effort has been put in by the team during the pandemic times to complete the production works. The teaser poster released on Bangabandhu’s birthday received an overwhelming response and now on the occasion of Eid, we bring the face reveal the poster for the audiences.”

Elated with the response to the poster release, Nuzhat Yeasmin, the managing director of BFDC, shared, “A token of gratitude to all the love showered upon us and it has boosted our confidence to bring to you the face reveal poster. Arifin looks stunning as Mujib, he’s a highly talented actor and a known face across Bangladesh.”

The film was extensively shot in both India and Bangladesh, and production concluded in December 2021.

Mujib: The Making of a Nation is slated to be released later this year.