Would like to thank people for making memes on me, says Rajpal Yadav


The popular actor, whose film Ardh (2022) is coming up for release, looks back on his career and also reveals why he hasn’t been seen in a web-series so far.

Rajpal Yadav with Rubina Dilaik in Ardh
give your opinion

But Yadav has also played serious characters in quite a few films like Main Madhuri Dixit Banna Chahti Hoon! (2003), Main, Meri Patni... Aur Woh! (2005) and Bhopal: A Prayer For Rain (2014). In an exclusive conversation with Cinestaan.com, the actor hinted that he wants to be known as someone who has also done serious roles.

One such film where Yadav will be seen playing the lead is music composer Palaash Muchhal’s directorial debut Ardh (2022), which will be released on Zee5 on 10 June. Also starring Rubina Dilaik and Hiten Tejwani, the film will see Rajpal Yadav play a struggling actor named Shiva who earns a living by pretending to be a eunuch on the streets of Mumbai.

While speaking about the project, Yadav also looked back on his journey in cinema and revealed why he has not been seen in any web-series so far. Excerpts:

You dress up as a eunuch in this film to earn money. How would you describe the film? Did you instantly agree to act in it?

This is a kind of drama about those people who are fighting for survival and for food, clothing and shelter. It’s about the dilemma whether someone should work for his survival or chase his dreams. Out of the 750 crore people in the world, 700 crore are like Shiva who are passionate about something but unable to become masters in that field.

As soon as I heard the subject, I agreed to do it. I am myself an actor and I know what theatre actors go through, but they still keep trying for success without complaining. This is life itself. I loved the director’s interpretation regarding this aspect. So I felt it’s an honour to do this film.

How challenging was it physically and mentally to dress up and act this way?

It was very challenging physically and mentally. I had to sit through the make-up process for an hour and a half. Suppose the shoot was at 6pm, I had to reach at 4pm for my get-up. And I had to portray two personalities. One was that of a responsible husband and father. On the other hand, he has to look at his career and what he does for survival.

You have been acting in films for more than 20 years. You started off with small roles in Mast (1999) and Shool (1999) and then climbed the ladder of success. How do you look at your journey so far?

It has been very good. I have got the experience of playing the lead, supporting lead and doing guest appearances. I feel I am the luckiest as I have got a chance to play different characters on screen since the past 20 or 22 years. I don’t remember the number of films I have done in these two decades, but it must be around 200. I have done single shifts, double shifts and also triple shifts.

I am glad I got a chance to be a part of commercial cinema and also play the lead in semi-commercial and meaningful films like Main Madhuri Dixit Banna Chahti Hoon, Main, Meri Patni... Aur Woh! and Bhopal: A Prayer For Rain. I am very happy with what I have got to do in terms of creativity. All thanks to god and all of you.

Along with the serious films you mentioned, I feel Rann (2010) is one film that did not receive much success despite being appreciated. The film is more relevant than ever today with the menace of fake news.

I feel the film was ahead of its time. The situation today is such that even those who don’t belong to the media are making up all kinds of news. So I feel in today’s times it is more relevant for the people. It doesn’t look like an old film even today.

Memes relating to your characters from Phir Hera Pheri, Hungama and Chup Chup Ke are a rage on social media. Have you seen them?

(Laughs.) It is good to see kids and adults spreading them. I am glad my memes are helping people get entertained and circulate their blood. They are providing good laughter therapy. I am happy with this. I have seen these memes. Of all the memes, I feel 90% are very good, but some are quite weird and I don’t understand them (laughs). But I believe in taking everything in a positive spirit and moving ahead. I had already found a place in the hearts of grown-ups. Now, with these memes and reels, I am getting love from today’s kids as well. I would only like to thank them. 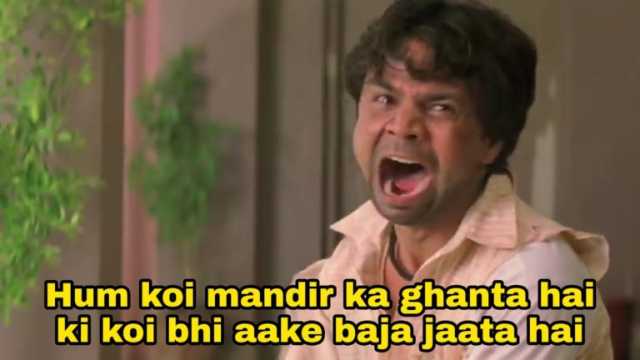 You have played different types of characters over the years, but you have got the image of a comic actor. Are you okay with this?

It is a blessing that whenever Rajpal has tried to make people laugh, they have laughed and whenever he did something serious, nobody laughed. Whenever I did serious entertainment, people have taken it in the right way. If you look back on the last 20 years, comedy films have been in vogue. So you tend to become a part of the kind of cinema that is made. I am entertainment ka pujari, so it’s good if people feel Rajpal is good at comedy and is a comedian. But at the same time, if they like what I am doing in Ardh, I would feel my decision [to become an actor] has been worth it.

For example, Charlie Chaplin succeeded in making people laugh and cry too. Apart from his comic films, look at his performances in The Great Dictator (1940), Modern Times (1936) and The Gold Rush (1925). In every performance of his, there is life hidden. The same can be said for Ardh.

Many film artistes have been seen in web-series over the past two years or so. You aren’t one of them. Why?

I always wanted to do web-series. I have signed a couple of them and completed one. It’s just that I wanted to be away from those shows where a lot of cuss words are used. I get appreciation from kids as well as the aged. Suppose someone is watching a show in the kitchen and there is a cuss word being uttered, it becomes awkward. I am not comfortable doing a web-series or film that has such lines.

In one of my films, my character once gave a gaali. At that time, after uttering the line, I realized I won’t be able to do this. But I am not against any type of project or platform. Every platform has its own audience. The number 6 appears six for some but also appears as nine to others. So I am giving good wishes to both types of people.

The web-series you have signed do not have any adult content?

Yes, they are fit to be seen by families. They deal with social issues. It’s a nice, meaningful concept. These days a lot of different types of web-series are made. I am happy to be a part of them.

Tell us about your forthcoming films.

There are two or three films in the pipeline. They will be released one after the other. Hopefully you will get to see them in the next two to four months.