The action spy thriller, directed by Anthony and Joe Russo, pits Ryan Gosling and Chris Evans against each other.

After a still of Dhanush in action, the trailer for the upcoming The Gray Man (2022) shows the actor throwing and taking some punches briefly. The action spy thriller, directed by Anthony and Joe Russo, pits Ryan Gosling and Chris Evans against each other.

Gosling is the title character, the known but unknown CIA operative, Court Gentry, who does the agency’s dirty work. He is protected by his handler, Donald Fitzroy (Billy Bob Thornton) and aided by Agent Dani Miranda (Ana de Armas) as his former colleague Lloyd Hansen (Chris Evans) has put a bounty on his head.

The trailer indicates that Dhanush’s character is one such operative who tries to bring Gosling down. This is the actor's second international project after The Extraordinary Journey Of The Fakir (2019).

Yesterday, the streaming platform also released his character’s solo poster dubbing him a ‘lethal force’. Tinged with warm hues, the actor gazes back intensely at the audience. 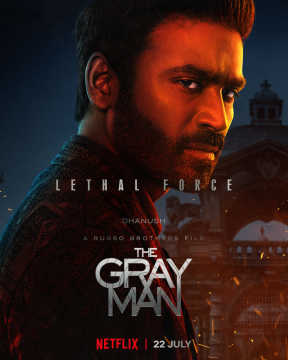 The Gray Man, which also stars Jessica Henwick, Wagner Moura, Alfre Woodard, Julia Butters, Eme Ikwuakor and Scott Haze, is due to be premiered on Netflix on 22 July. Watch the trailer below: