Conceived as a tribute to Mrinal Sen on his centenary next year, Palan will have Dutt, Majumdar and Mamata Shankar reprising their roles from Sen's Kharij (1982).

The first look of the artistes in Kaushik Ganguly’s upcoming film Palan (2022) was revealed on 20 May. Conceived as a tribute to legendary filmmaker Mrinal Sen in his centenary year, Palan will see veterans Mamata Shankar, Anjan Dutt and Sreela Majumdar reprising their roles from Sen’s Kharij (1982).

The film will also feature Jisshu Sengupta and Paoli Dam in crucial roles. Actor Debapratim Dasgupta, who played Hori as a child artste in Kharij will also be seen in the upcoming film.

Set in current times, Palan has many of the same characters from Kharij, residing in a now dilapidated house in Kolkata. The story takes off from where Kharij ended, but at an earlier press conference Ganguly had clarified that there is no connection between the storylines of the two films.

The make-up and costumes of all the artistes do justice to their lower-middle-class background in the story. In one of the photos, Dutt can be seen holding on to a walker. Sengupta has the look of a typical government employee, while Paoli Dam's photo makes it evident that she is essaying the role of a homemaker. 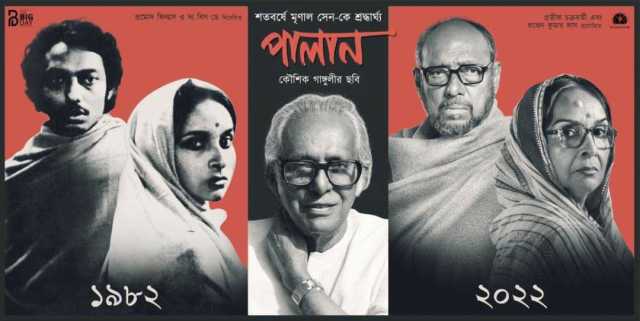 The makers also paid tribute to Sen with another poster, which is a collage of the young Dutt and Mamata Shankar’s looks from Kharij and their aged versions from Palan, with the legendary filmmaker in the middle. The poster depicts the forty-year transformation of the artistes and prepares the audience for a contemporary story.