The star says Anek, directed by Anubhav Sinha and featuring Khurrana as an undercover officer, tries to represent the political unrest in the Northeast correctly.

When it comes to making a statement with his choice of films, actor Ayushmann Khurrana has always been a step ahead of many of his male contemporaries. After addressing an array of sensitive issues, including the reality of deep-rooted casteism in Anubhav Sinha’s Article 15 (2019) and the acceptance of gender fluidity in Chandigarh Kare Aashiqui (2021), the star is now ready to introduce mainstream Hindi audiences to the continuous political unrest in northeastern India.

In Anubhav Sinha’s upcoming film Anek (2022), Khurrana plays special undercover agent Joshua, who is put in charge of restoring peace between the separatists in the region and the Indian government.

Ahead of its theatrical release on 27 May, Khurrana flew down to Kolkata to promote the film and spoke at length with journalists at an event at Miraj Cinema about the preparation which was an eye-opener for him in many ways. Excerpts from the conversation.

What was the physical and psychological transformation you went through while portraying Joshua?

The first job was to prepare myself physically. I was at least 8kg heavier while working for the film. With every film, there is a need to change our physicality. We need to go into method acting when we are playing characters with whom we have no similarities. I am not Joshua. I know a friend who works in the special forces and is just like Joshua. Speaking of challenges, it was pretty difficult to shoot in the rain.

I think whichever film I do, be it Article 15 or Anek, the motivation comes from an empathy towards fellow Indians, different communities, or people in general. Addressing these issues is a kind of value addition to the films.

Article 15 explored the deep-rooted problem of casteism in our society. While preparing for the role, I read Annihilation of Caste by BR Ambedkar. It was an eye-opener for me. I read another book titled Joothan by Omprakash Valmiki.

But for this particular case, which is quite an alien topic for the mainland, I drew inspiration from actual people. I know a Manipuri guitarist who used to call me Mayang, which means an outsider in Manipuri. I would tell him that you cannot call me Mayang, but he would say that’s how the identity as people of this country has been generalized for both them and us.

I have also seen these people being ill-treated in Chandigarh.

When I hosted India’s Got Talent (Season 2), the Shillong Chamber Choir emerged winners. I went to interview them. Empathy came from there. When I met Anubhav Sinha, I realized that he shared the same thoughts. We felt that we needed to unite them with the mainland. His tai chi teacher was from Nagaland. There were ample stories, which were turned into this beautiful script.

As an artiste, I think we have certain social responsibilities. I believe in cinema for change.

What common factor do you think keeps the country together?

I think it is the diversity in religions, languages. Every few kilometres, there is a change in the dialect. I think diversity is both the strength and weakness of the nation.

At present a debate on the supremacy of the Hindi language is going on. There is a reference to it in the trailer for your film as well. Do you think artistes should be more responsible while voicing their opinions on such debates?

I guess everybody comes with a certain kind of experience in their lives. But I believe we should respect each and every language of this country. By default, Hindi is spoken by a majority of the population, but that doesn’t mean those who don't speak Hindi should be treated in a certain way. It is quite unfair to force someone who has a different mother tongue to speak Hindi. It really doesn’t matter whether it is a common language, bas dil ek hona chahiye [we should seek to unite hearts, that's all]! 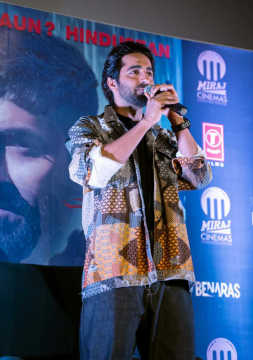 What would say about the fact that for the first time a mainstream film has been made on the political unrest of the Northeast? What were your takeaways from the shoot?

Yes, this is the first mainstream film on this issue. Also, the film has the correct representation of the long ongoing unrest. Andrea Kevichusa is just not a character of the film; she is the female lead. Her role is on a par with mine. When the story comes from the horse’s mouth, it means a lot more to the people who have suffered. Hindi cinema has grown up with this film because 80 percent of the cast is from the Northeast.

Of course, there is a certain empathy, but when there is correct representation of the people who have suffered, it holds more weight and lends a lot of credibility to the work. It’s the right way to do it.

I learnt a lot regarding the ground reality from the first-hand experiences while shooting in Assam and Meghalaya. I am still learning about the problems, which are easily termed as 'of the Northeast region'. But they are also multi-cultural and multi-lingual. There are so many different tribes. It is not a homogenous entity over there. There are different struggles going on in different states. It was an eye-opener for me to know that an educated common person from there doesn’t like to be represented as a Northeasterner. They want to represent their state or tribe and they are passionate about it.

Any film or character which has something to say stays with me. The kind of cinema I and Anubhav Sinha believe in enriches us throughout the filmmaking process. These issues are deep and vast. I would like to do more of these kind of films as there is no dearth of subjects. People often say that I am exhausting the subjects, but that is not true. There will be no lack of quirky and thought-provoking subjects in such a diverse country.

Did you ever consider being part of this film to be a risk?

I think I have always trodden the path of my career with a lot of courage and challenge. I have always been a risk-taker when it came to films and subjects. I have built my entire career on that, so I was never scared. I started my career with street theatre, which deals with pertinent social issues. I think this is just an extension of my street-theatre personality.

What would you like to tell the audience awaiting the film's release?

This is a very special film for me. This is a very important film, which deals with an extremely pertinent issue of current times. We have made this film from our heart. I am playing a special undercover agent in the film, a character which I have played for the first time. At the same time, it’s not just an action film. It is a political thriller. The film promotes the diversity of language and also speaks of a unified country.