I was afraid of dogs before working in Pet Puraan, says Lalit Prabhakar


The actor speaks about the problems the team faced while shooting with a dog and a kitten and the experience of working with director Dnyanesh Zoting.

The comedy drama has been written and directed by Dnyanesh Zotling and tells the story of a married couple who decide to become parents to pet animals instead of having a baby.

In a conversation with Cinestaan.com before the release of the web-series, Lalit Prabhakar discussed the show, the problems they faced while shooting with a dog and a kitten, and the experience of working under the direction of Dnyanesh Zoting. Excerpts:

You play a married young man who is fond of dogs. What more can you tell us about the series and your character?

This is a story of a married couple who are pretty happy and satisfied with their married life. They are both happy-go-lucky people and always approach any problem with a positive attitude.

My character is of a guy who is quite fond of dogs. In the trailer we see that he finally decides to adopt a dog. But what are the issues he faces after a dog comes into his life? Does it affect his work-life balance? The series will also show how pet parenting brings certain changes in their characters and helps them become better people.

So how was the experience of acting with a dog and a kitten?

It was a fascinating experience for us even though they were not professional actors. The dog had basic training, but at the end of the day you can never be sure how they will react. So as an actor you always have to be on your toes. Suddenly their mood can change and they may not be interested in shooting any more. So you have to be alert and try to react to them as naturally as possible. Also you have to keep their interest alive in the shooting process.

These kittens and dogs are not actors that you can persuade them by saying, 'Hey, it's just one last shot and then you are free'. Once they lose interest, that's it. You can't do anything even if you need only one shot. You need to wait till the next shooting schedule or till they are back in a good mood.

But, honestly, this process of shooting with the dog and kitten was refreshing for us actors as well. Because they don't know how to act. They just react honestly. If they are joyful in front of the camera, then they are actually happy and not just pretending to be happy. So it was a unique experience to shoot with them. 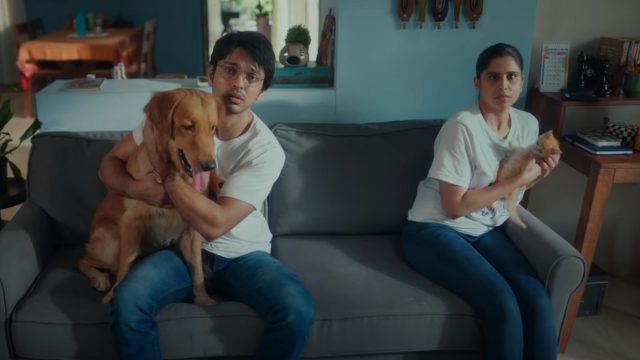 With this unpredictability of your co-stars, did you guys face any difficulties during the shoot?

Yes, it was not easy at all. As you said, you can't predict how they will react. Sometimes they were not reacting the way we wanted; at other times they would simply lose interest. So we had no option but to stall the shooting till they were again in a good mood. We had to do a lot of retakes also. Because no matter how good you were during the take, they also had to react the way we wanted.

But I have to say that because of this dog and kitten we also got some magical moments. Like sometimes they would do something that was even better than what we had originally planned and it would make the scene even better.

Are you a cat person or dog person in real life, or both?

I'm neither a cat person nor a dog person. I'm scared of animals even if they are cute kittens or puppies. But I must say after working in this series, I'm not scared of dogs any more and can be a bit more comfortable around them.

As you were afraid of dogs before shooting for this series, weren't you apprehensive to say yes to this project?

First of all, I always like to do something different. If you go through my filmography you will notice that all my projects are very different in terms of subject, theme and also genre. So this Pet Puraan was also something unique and challenging for me. So though I was initially apprehensive, I agreed to be part of this project.

To make sure we both got a little comfortable around the dog and kitten, we did a workshop for three or four days when we simply tried to create a bond with them. It was mostly about making them comfortable around us, so that when we begin shooting, things are a little easier for all of us. And I must say it did help.

How was the experience of working with Sai Tamhankar? This is your second project with her after Medium Spicy (2022).

We all know Sai is a fantastic actress. Because we had worked together in Medium Spicy, we already had a good rapport before we even began shooting for this series. Sai has a unique style of working and I got to learn a lot from her. I hope the audience also likes this couple.

This is Dnyanesh Zoting's first project in this genre. Both his previous projects were suspense thrillers. So how was it working under his direction?

I have known Dnyanesh for many years. We are really good friends. He was chief assistant director on Chi Va Chi Sau Ka (2017). We had wanted to work together since then, but for some reason it never materialized. Finally I got a chance to work with him. He is a very sorted person. He has clarity about his projects. If you have seen his previous works, you will notice that he always wants to say something important through a project. He has some strong opinions about our society and he makes sure to infuse his political and personal opinions in his projects. Even in this series, he has tried to give some important messages without being preachy.

Talking about his rapport with actors then, if he can handle animals with such care, you can imagine how patient and sorted he must be with us.

The trailer gives a fair idea about the tone and subject of the series. It looks like a fun comedy drama, so what more can we expect from the show?

This subject has never been explored in our mainstream cinema till now. The series will give you a clear idea about what pet parenting means and what are the things you have to go through to become a good pet parent. Just adopting a kitten or dog because they look cute is not enough. You also have to take proper care of them. There are so many other things you have to look out for, like their health, their diet. It's definitely not as easy and fun as it looks. And the series also talks about how we can overcome all those problems if we truly care about them and love them.

We are now waiting for the release of Medium Spicy where I will be seen again with Sai. The film is directed by Mohit Takalkar. It's a heartwarming film and we are all excited to show this film to our audience. In fact we begin our promotion immediately after we are done with the promotions of Pet Puraan.