Was bit of scary territory for me, but I really enjoyed it, says Divya Dutta of her latest film Maa


The Gippy Grewal- and Babbal Rai-starrer was released in cinemas last Friday ahead of Mother’s Day.

Actress Divya Dutta has donned many roles in Hindi and Punjabi cinema with aplomb. In her latest feature Maa (2022), which comes after a long break from Punjabi cinema, she plays a woman across decades — beginning as a young, newly married woman and going on to play mother to grown-up sons.

Playing the titular role in the film, where she stars alongside Gippy Grewal, Gurpreet Ghuggi, Babbal Rai and writer Rana Ranbir, Dutta carries the film with her commendable performance.

Speaking of the unconventional role and what attracted her to it, she said, “Initially, I was apprehensive about taking this up because when you title something Maa, you feel that you will be the hero’s mother, but [actor-producer] Gippy came and narrated the story to me and I felt, ‘Oh my god, this is an entire journey of a character’, which ranges from the age of 30 to 65.

"So 35 years of Manjit Kaur and all the shades that come in — be it her vulnerabilities, her strengths, her love for her children, husband... and the way she protects them.

"It’s divided into three stages of marriage, kids and, of course, old age, so the first two [stages] were fine, but for the old age, you have to grasp the body language and everything... so it was a bit of a scary territory for me, but I really enjoyed it."

Historically, mainstream Hindi cinema has had a discomfort with older woman roles, where once an actress plays a mother, she is doomed to be playing that role for pretty much the rest of her career, until she starts playing grandmother. However, the times are a-changin’ with a wider variety of roles out there.

Dutta explained, “It has changed. Now, it doesn’t matter any more, because that trend is gone of giving one actor similar kind of roles. I mean, they would like to, but because there is such a wide variety of roles coming in, people don’t give in to such things.”

The coming of OTT (over-the-top) platforms has tremendously expanded the scope for artistes. “I think that because of OTT, which is a far more democratic platform for actors, where your superstars, actors and newcomers are all on the same platform and your finger decides what you want to watch... it’s so interesting when people are casting now for films because people say that that particular person who had done a small role in a film, let’s take him as the hero.

"Earlier, it didn’t happen. Earlier they would say, if he has done television, don’t take him in films. There were so many don’ts. Now, everyone is so open.

"Also, I think a lot of actors have come up from smaller roles to bigger ones and made it big. Things have changed. It has become more story-oriented, more character-oriented. I think even the superstars want to do character-driven roles. These are good times.” 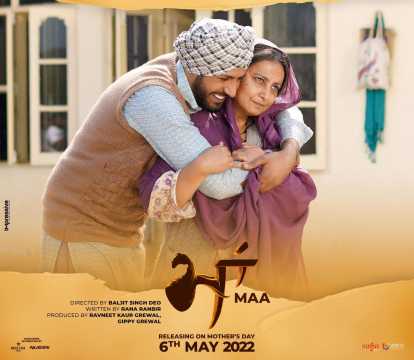 Although Maa marks Dutta’s return to Punjabi cinema after several years, it is the roles that really dictate her choices, not the language or industry. In Maa, she plays the titular character, which enables her to showcase her acting skills.

“I guess I have been lucky because I started with Gurdas Mann and those films were very different in their time," she said. "They were trendsetters, they were trailblazers, and then I have come back with a film with Gippy, who is a maverick in many ways. He tries such a different variety of roles. In spite of giving such hits, he does not follow just that and keeps experimenting with stuff. He has a vision and I love that. He said [about Maa], ‘I only see you doing this [role]’ and when I see this [film], I feel so glad that I did it.”

The film was released in time for Mother’s Day and is a tribute to parents. Some years back, Dutta wrote a memoir capturing the beauty of a mother-daughter relationship and celebrating her mother’s struggles in shaping her.

“I have been a chosen one, to write a book about my mother and bring children closer to their parents," the actress said. "I remember I was at the airport and this girl came and hugged me tight. I thought she was complimenting me for my film, but she said she had just finished my book, Me and Ma, and said, ‘Thank you for reconnecting me to my mother. The first thing I did was go to her and tell her how much I love her and how much I have ignored saying that’.

"I felt like a medium to do that and I felt I had my mother’s blessings to be one. With this film again, I feel like a medium to give a reminder call to people, ‘If you really have to say it, say it now’."

Dutta has another release coming up with the action thriller Dhaakad (2022) starring Kangana Ranaut and Arjun Rampal in which she plays a negative role. She said, “I’m very excited about that because I have never played such a mean character. For an actor, it’s so amazing that when you look in the mirror, you see a different image of yourself. That is gratifying.”

Speaking pf wearing many hats, Dutta has an open mind on whatever life throws her way. Musing about what she is looking forward to next, she said, “Acting is something I am very passionate about. Writing became an integral part of me. I didn’t know I had it, but the connect I got through my writing with my readers has been amazing. So, I don’t know what next, but as life keeps happening to me, I would like to explore it.”