Apharan told me I can play the lead, says Arunoday Singh


In an exclusive interview, the actor opens up on how there was a time when he could not choose his roles and how the Voot Select show has changed his life.

Arunoday Singh in Apharan (Season 2)
give your opinion

When I caught up with Arunoday Singh earlier this month, the second season of his Voot Select show Apharan was yet to be released and the actor was astonished to be told that I had seen it already. He himself had not watched a single episode till then.

I assured him in the course of the conversation that I will not mention any spoilers in the interview. Arunoday Singh responded coolly, “It’s fine even if you do. It is up to you.” This was a surprise because artistes and, indeed, anyone connected with a movie or series is usually petrified if even a hint of a spoiler is published.

Apharan (Season 1) ended with Rudra Srivastava (Arunoday), an officer with the Haridwar police in Uttarakhand, extricating himself from a mess created after he is forced to abduct a young woman and getting reinstated in the force. Directed by Santosh Singh, the second season also stars Nidhi Singh, Ujjawal Chopra, Sanjay Bhatia, Snehil Dixit Mehra and Saanand Verma.

Arunoday Singh said the show has been very important not only in his career, but also in his life. “Apharan changed my life,” he said. “It made me realize I can carry a project on my shoulders as a lead character. Before this show, I used to wonder why I am not getting such roles. A voice inside used to ask if I am ready for it; you have to be worthy and capable. So I was insecure, but Apharan gave me thehraav [stability and calm].”

Speaking of what the viewer could expect from Season 2, he quipped, “More! Hopefully more quality and acting. Everything higher. Now there is more punch and drama in the story. The stakes are higher because earlier the story was personal but now it’s not more personal. Now there are other people whose situation is screwed.”

Voot Select streamed Apharan (Season 1) in 2018. The second season has come almost four years later. Some artistes find it difficult to revisit their characters after a long gap, but others find it easy because they have done it already. Arunoday Singh said he is in the latter category. “I have been doing theatre for many years,” he said. “So if you have played it once, recalling it is easy as compared to doing a new character. Acting is still as difficult.”

The first season saw the actor perform stunts in the lanes and bylanes of Haridwar and Rishikesh. But Season 2 sees him do these antics in Serbia. “I do my own stunts,” he said. “I am used to it. I am a half-monkey already. So this is my favourite activity while shooting. We used to play chor-sipahi in childhood. I am still doing the same, but now I get paid for it (laughs). So it’s great fun.”

This was Arunoday's first visit to Serbia in Eastern Europe. “The country is very beautiful,” he said. “The people are wonderful. They are funny with a dark sense of humour. They are very tough people; they have faced a lot. They are also very hardworking. And they all are tall, so I fit in better!”

The first season was directed by Siddharth Sengupta who also wrote the second season. Apart from these two seasons of Apharan, Arunoday Singh collaborated with him on Netflix’s Yeh Kaali Kaali Aankhein (2022), which Sengupta directed. In a recent interview, he said Sengupta is the only director with whom he has worked more than once in his career.

Speaking about his fondness for Sengupta, Arunoday said, “I love him! That’s the simplest and truest answer. He has given me a lot of confidence. He is a very, very, very good director. He is a wonderful writer too. With him I am safe. He won’t let me get lazy. So I don’t have to worry whether I am carrying out my tasks well. He always manages to get a good performance from me. There are directors who don’t realize how far they need to go. But he always has that control. He is always honest and he knows I like honesty.”

When it comes to signing projects, it is important for Arunoday Singh to relate with the character, even when he is playing an out-and-out negative character. “You have to relate to something,” he said. “There needs to be some humanity relatable. It’s just that it becomes extreme [in a negative character]. For example, sometimes you get thoughts of killing someone. But while acting, you can take it to the extreme level. Hence, there has to be some relatability. So there are similarities in Rudra as well.” 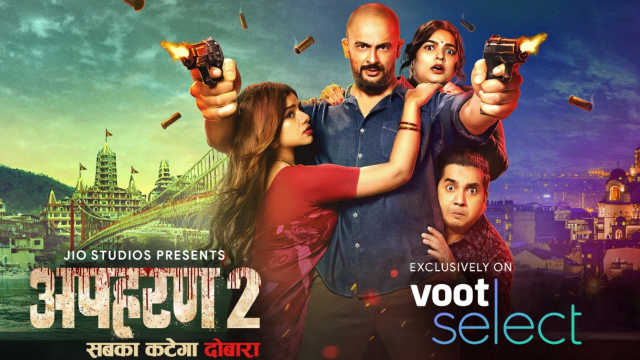 Arunoday has performed more than his fair share of characters that are negative or have grey shades. “I didn’t have an option,” he explained. “I don’t have a godfather [in the film industry]. I did what I got. I happily did everything; I am sorted. It wasn’t possible to think I won’t do this or that. If I get a job, I will do it. My attitude is the same today. But today I have a chance to think whether a project is worth doing.”

Considering his physique and fondness for action, it would be no surprise if Arunoday were more comfortable doing action roles. But he insists he is comfortable with 'everything'. "I am comfortable with acting," he said. "I am ready to do anything.”

The actor also said he remains his own biggest critic. “I trust everyone to have their opinion; my sisters and parents. But nobody is as critical as me. If I like it, it’s good. I am not concerned if others agree with me,” he said.

The second season of Apharan was released four years after the first one because of the COVID-19 pandemic. But the wait for things to get back to normal did not affect Arunoday Singh mentally. “The whole world was shut,” he said. “We were gradually able to start shooting after that [first lockdown]. There are so many people who couldn’t go back to their jobs. We should consider ourselves fortunate.”

He added, “It’s difficult. But for a lot of people, it was much more difficult. So we shouldn’t complain. There are a lot of important tasks in the world. Acting is just entertainment. It’s much lower in the list.”

Asked about his forthcoming projects, he shot back, “God knows! I haven’t signed anything yet.”