55 years of Milan: Reincarnation saga that lives on in the songs composed by Laxmikant-Pyarelal


Starring Sunil Dutt, Nutan, Jamuna and Pran, the Hindi film was a remake of A Subba Rao's National award-winning Telugu feature Mooga Manasulu (1964). The feature was released on 17 March 1967.

Gopi gently corrects her, “Arre baba, shor nahin, sor, sor, sor...” And a laughing Radha gives it another go, altering her diction this time. Thus sets off the melodious track ‘Sawan Ka Mahina’ which over the years has come to define this engaging romance between a boatman and a rich zamindar’s daughter.

The song ‘Sawan Ka Mahina’ was one of nine tunes written by Anand Bakshi and composed by Laxmikant-Pyarelal for the film. The composer duo’s harmonious album ended up winning them the Filmfare Award for Best Music Director. The strong musical featured tracks by Mangeshkar and Mukesh, which gave the film its identity.

The immortal triumvirate of Lata Mangeshkar and Laxmikant-Pyarelal

A remake of filmmaker A Subba Rao's National award-winning Telugu feature Mooga Manasulu (1964), Milan begins with two promising students Gopinath and Radha Devi embarking on their lives together as newly-weds. They get a special send-off from the college where they studied and launch into a song ‘Hum Tum Yug Yug Se’ within five minutes of living together unsupervised.

However, on their honeymoon, Gopinath gets an unwelcome flash into his previous life and brings Radha to an elderly woman Gouri who confirms his memories. In his past life, he was a boatman who was orphaned as a child and ferried the daughter of a wealthy landowner, Radha, whom he reverently calls ‘Bibiji’, across the Ganges. 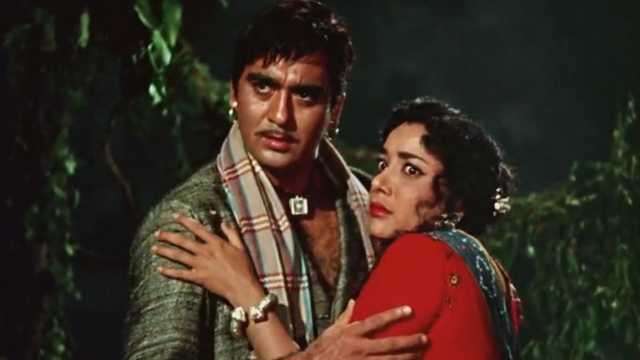 We learn, through a flashback that as a young woman, Gouri (Jamuna) was in deeply love with Gopi, but he was unaware of her affection. Bibiji was kind and sweet to Gopi and he, in turn, held her in high regard. His devotion to her, we see, only grows over the course of his lifetime.

The conflict in Milan, produced by LV Prasad, is backwards. We already know the couple had their happy ending in their present lifetime, but what went wrong in the previous one? The feature sets out to highlight the class, caste and societal differences between the unlikely couple.

The issue of caste is unspoken, unlike Sujata (1959) which also starred Dutt and Nutan, but the implication is crystal clear. In the grand tradition of Hindi films themed on reincarnation such as Mahal (1949) and Madhumati (1958), there is a love story that defies all odds.

Amongst the obstacles that Gopi and Radha face are those posed by the latter’s step-uncle (Pran), who seeks to profit financially by getting her wedded to a wealthy classmate from a respectable family. Her suitor, the persistent Rambabu, was played by a young, fresh-faced Deven Varma. Their marriage is later arranged by Radha’s family but has an unhappy outcome for her.

Forced to return home, she begins to think of a future with Gopi. Sordid rumours about their relationship force them to elope, leading to their eventual death in the river Ganges, where most of their interactions took place.

Dutt is the anchor between Gouri and Radha who both care for the naive Gopi. Playing a rustic character with charm and deference to Nutan’s character, the actor was at the height of his stardom.

Nutan looks ethereal from start to finish and Mangeshkar’s voice suited her perfectly in this feature, as her character, too, is gifted as a singer. The actress won her fourth Best Actress Filmfare trophy for her performance.

Jamuna, as the scrappy Gouri, was reprising her role from the Telugu film and picked her first major win with the Filmfare award for Best Supporting Actress. Her colourful costumes were designed by Bhanu Athaiya, who would later go on to win an Oscar for Gandhi (1982). Athaiya also made Radha and Gouri visually distinct, giving the former a regal look.

While the storyline, in retrospect, is regressive, the treatment and music of the feature stand out. Cinematographer PL Rai focused on flowers and the river to symbolize the connection between the Gopi and Radha. The lead couple’s slow romance is narrated through the songs which show their close bond and give the soundtrack’s singers ample opportunity to shine. Besides the popular ‘Sawan Ka Mahina’, Mukesh also delivered soulful renditions in ‘Mubarak Ho Sabko’ and ‘Ram Kare Aisa Ho Jaye’ which were matched by Dutt’s stoic performance.

Mangeshkar and Mukesh would perform ‘Sawan Ka Mahina’ at live shows to the great delight of audiences, especially as the singers recreated the scene by Dutt and Nutan on stage. For Laxmikant-Pyarelal as well, the uniform success of the musical album solidified their standing in the film industry as contenders to stay.