At the film's trailer launch in January, the actress spoke of the conviction, challenge and excitement of being a part of Marathi cinema's first zombie comedy.

An experiment in any art form is not without risks. Yet, actress Vaidehi Parshurami spoke of confidence and excitement at the release of the trailer for Zombivli (2022).

The zombie comedy by Aditya Sarpotdar, released in January this year, introduced a novel concept into Marathi cinema with success. At the trailer launch, Parshurami explained why she believed in the project.

"The concept was so interesting, being Marathi's first zombie film, and when you have someone like Aditya Sarpotdar coming forth and suggesting you take it, it gives you faith," the actress said.

In many ways, it echoed what her co-stars had said about the film. With its mix of practical VFX and a fairly sound story, Zombivli rode the wave of the early post-lockdown theatre audience.

Parshurami said, "The reception for the teaser, the song and the trailer is proof of the audience's expectations from the film. It gives us confidence that the audience will welcome such experiments."

What gave you the confidence that Zombivli will work as a project?

The confidence came from the director's conviction. The concept was so interesting, being Marathi's first zombie film, and when you have someone like Aditya Sarpotdar coming forth and suggesting you take it, it gives you faith. The producers, Yoodlee Films, also gave it such backing and proved that you can bring such projects to life. 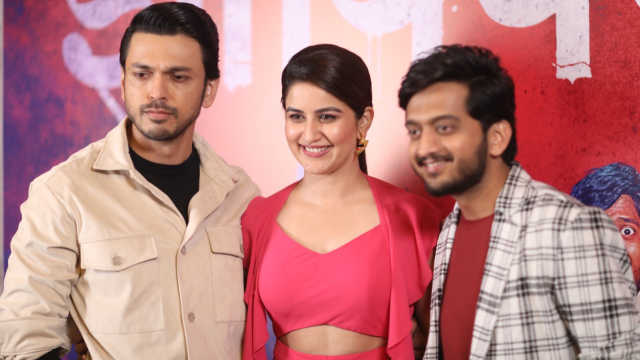 When things like these happen, the vibe gives you the confidence that it will happen. That played a very important part. This is not the first time someone has come up with a different concept, but budget constraints, lack of visualization, sometimes [lead to failure] in execution. Aditya [Sarpotdar] brought in his expertise in delivering this project.

If you look at his earlier films Classmates (2015) or Faster Fene (2017), the imagination and execution with success is something of a confidence booster. Also, as an actor, when you get a chance to work on such projects, it is a trigger in itself to go and perform. I remember meeting Aditya for the first time; instantly I told him we are in this.

Was there anxiety considering the time in which the film was shot, and the uncertainty around theatres reopening?

Anxiety, not much. There was a certain curiosity and enthusiasm because with the people involved there was an assurance that the film will be released. The question was not if but when. When the second lockdown ended, there was excitement about the film's release.

The reception for the teaser, the song and the trailer is proof of the audience's expectations from the film. It gives us confidence that the audience will welcome such experiments.

What was the atmosphere like during the shoots, since you shot during the first lockdown, and how was the balance between story and VFX maintained?

Here, the director plays a key role, what weight to give which element, and considering the work he has done in the past he had sorted this out well. So, we just had to play our parts.

The shooting was a lot of fun. There was a different experience, and it was something we had never done before in life, so a fun-filled and enriching experience is all we can call it.

It is a novel time for Marathi cinema with theatres reopening. With regional cinema coming to the fore, is content-rich experimentation the way of the future?

We are experimenting with this film, but it also has a scale. We have been discussing that we are here to set a benchmark. If a team like us can shoot a film like this, produce it and bring it to the screen on this scale, then it becomes a benchmark for others to follow. I am sure it will be a trendsetting film.

What else do you have up your sleeve for the year?

Well, I actually have quite a lot. A lot of my films were not released through the pandemic, and along with the new work I will be doing, hopefully, they will be released this year.