Performers Sandhya Roy, Ambarish Bhattacharya and filmmaker Sudipto Roy recalled fond memories of the veteran actor and singer a few days after his passing on 11 March 2020.

Veteran artiste Santu Mukherjee, who is known for his appearances in both Bengali films and television serials, died on 11 March 2020. He had been battling lung cancer and had been admitted to AMRI hospital a month prior to his demise.

Immensely popular as a jatra actor and also a noted singer, Mukherjee, the father of celebrated actress Swastika Mukherjee, commenced his career in Tarun Majumder’s Sansar Simantey, starring opposite the filmmaker’s wife, renowned actress Sandha Roy in 1975 and appeared for the last time on screen in Leena Gangopadhyay and Saibal Banerjee’s Sanjhbati (2019).

Though the actor appeared in close to a hundred films and worked with most of the prominent directors of his time, including Tapan Sinha, Prabhat Roy, Anjan Chowdhury, Goutam Ghose, Haranath Chakraborty and Kaushik Ganguly, very little has been discussed and written about his career.

Veteran actress and politician Sandhya Roy, actor Ambarish Bhattacharya, who worked with the late actor in Shiboprosad Mukherjee and Nandita Roy’s Gotro (2019), and filmmaker Sudipto Roy recalled fond memories of the veteran, a few days after his passing.

“He debuted with me in Sansar Simantey and then we worked as the lead pair in many films,” said Roy, who worked with Mukherjee in Ganadevata (1978), Tagori (1985), Bhalobasa Bhalobasa (1985), Parasmoni (1988) and many other films.

Among all the films they did together, Khana Baraha (1981), also starring the legendary Uttam Kumar, was the most popular. “He was a very serious actor but otherwise was a very jolly person. He was a self-made actor. He started as a character actor and eventually played the lead in many films. He was a brilliant singer and gained immense popularity in jatra as well,” added the artiste.

“We were not very close friends but whenever we met, I felt a warmth from his side. Often between shooting breaks, he would sing and entertain us,” recalled the veteran actress.

“For us artistes, our workplaces turn into our homes. From that perspective, I can say that I have lost one family member now,” she said.

For Bhattacharya, shooting for Gotro with Mukherjee for ten days is one of his most cherished experiences. “We shot the film in mid-summer. All of us, who are almost his child’s age, including Manali and Saheb, used to get quite exhausted due to the scorching heat. However, to our surprise, Santu Babu used to enjoy the entire shoot like a child. We did not even make out that he was suffering from cancer,” reminisced the actor.

Bhattacharya is of the opinion that the veteran's jatra career should be documented and discussed more. “He was the mahanayak of jatra. He performed traditional folk theatre continuously for twenty-five to thirty years. He often used to tell me stories about those days. I have heard that people would throng to watch his performances by the lakhs in the suburbs,” he said.

According to him, though Mukherjee has never been considered a star in Bengali cinema, he was definitely one in the annals of jatra. He would sing fifteen to sixteen songs in each performance and there would be continuous shows for more than hundred nights. He travelled the length and breadth of West Bengal with his troupe. “Quite naturally, he could not sing anymore in his last days but he had a beautiful voice,” said the actor.

"We have often heard artistes saying that one should leave all the worries outside the studio and Santu Babu used to practise exactly the same. No matter how hot it was or whether there were technical failures, he never complained. Rather, he worked with a spirit of a nineteen-year-old boy," he added.

Lamenting the loss of a generation, Bhattacharya said, “He would often tell us that they did not have the facilities that we get today. He once said, 'We would not be conscious of all these things. We would sit in a room with a single fan and work with a collective spirit amidst fun, but you people complain if there is no make-up van or there is a food problem'."

One of Sudipto's favourite performances of Mukherjee is the one from Goutam Ghose’s Kaalbela (2009). “He played the father of Parambrata (Chatterjee) in the film. He praised my film Kia and Cosmos (2019) and said that such films are rarely made in the Bengali film industry,” said the filmmaker. In Kia and Cosmos, Swastika played one of the protagonists.

However, Sudipto got the sense that the veteran was deeply disturbed by some of the contemporary Bengali films. He was even critical of the works featuring his daughter. “He would often tell me that I would have to go to Mumbai, as no one would appreciate my work here,” recalled the director. 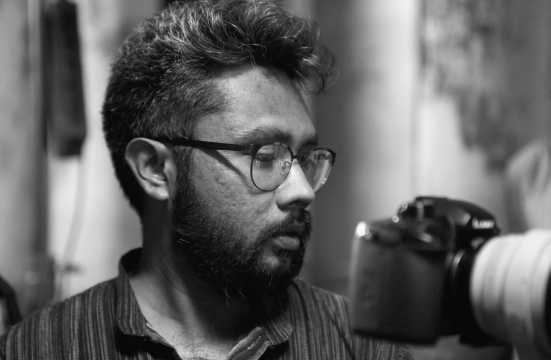 Sudipto would often discuss films with Mukherjee or listen to his stories about the good old days. “He also told me that once he left a project, despite getting the opportunity to work with Uttam Kumar, because he did not like the content,” he said.

Mukherjee was apparently quite excited when Sudipto discussed the script of his Hoichoi original film Cabin Guard before it went on the floors. “He was also quite concerned about whether the concept would be appreciated or not. Even after Kia and Cosmos was released, he would often ask me if I had managed to recover the production cost,” said the filmmaker.

The late artiste was also deeply perturbed by what he saw as a decline in the Bengali people's attitude towards creativity in general. “He was a no-nonsense person and would often criticize the rising mediocrity in Bengali culture,” he added.

“Once his voice would only brighten up his surroundings but he could hardly talk in his last days. It was painful to see him like that and therefore, I feel, that he is relieved and in a better sphere of existence now,” said Sudipto.