Kamal Haasan’s Vikram has set the cash registers on fire.

The film, which also stars Vijay Sethupathi, Fahadh Faasil and Suriya, has been appreciated by all audiences. Kamal’s Thoongavanam (2015) co-star Trisha Krishnan is bowled over by the movie and she has already watched it twice.

Trisha took to Instagram Stories to share a video clip from the movie hall where she watched Vikram for the second time. 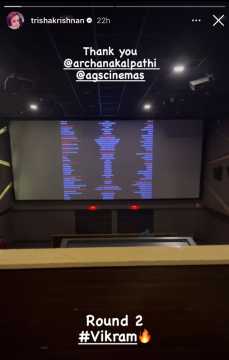 In a subsequent story, Trisha shared a picture of some of the people who watched the movie with her. 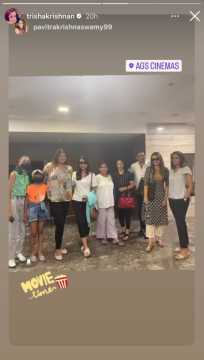 Vikram has turned out to be the biggest blockbuster in Kamal Haasan’s career as it inches closer to entering the Rs200-crore club. According to trade pundits, the Lokesh Kanagaraj film is expected to exceed the lifetime earnings of superstar Rajinikanth’s Enthiran (2010), which is the highest-grossing Tamil film of all time.

The film, which was dubbed and released in Telugu, Hindi and Malayalam, sees Kamal reprise his role from the 1986 film of the same name.

Vikram, which stars Suriya in a cameo, sets the stage for a franchise and it seems that the actor could be playing the antagonist in Karthi’s Kaithi 2 and the next film in the Vikram franchise.

If everything goes as planned, the third part in the Vikram franchise will go on the floors sometime next year. Before that, Lokesh will finish his next film with Vijay.