10 years of Gangs Of Wasseypur: I felt only the director of Black Friday can make this film, says Zeishan Quadri


As the Anurag Kashyap magnum opus completes a decade, the film's writer and actor Quadri looks back on its creation and discusses the possibility of Part III.

More than a decade ago, Zeishan Quadri was eager to enter the film industry as he was confident he possessed talent in writing, acting and direction. He started off by penning down some underworld stories of Wasseypur in Dhanbad, Jharkhand, from where he hailed, and took the idea to filmmaker Anurag Kashyap.

That idea was developed and went on to become one of the landmark movies of Hindi cinema, Gangs Of Wasseypur (2012).

The film, which was released in two parts within a span of a month, was the story of the desire of gangster Sardar Khan (Manoj Bajpayee) to avenge the death of his father Shahid Khan (Jaideep Ahlawat) at the hands of Ramadhir Singh (Tigmanshu Dhulia). After Sardar is killed, his son Faisal Khan (Nawazuddin Siddiqui) carries on with the task.

As Gangs Of Wasseypur completes 10 years today (the first part was released on 22 June 2012), Quadri looks back on the creation of the two-part epic and discusses the possibility of Part III.

How important is Gangs Of Wasseypur in your career? How was the idea born?

I have earned everything only because of Gangs Of Wasseypur. After working for all these years, we haven’t been able to make this type of film again, although we tried a lot, to be honest.

The idea was born while I was watching City Of God (2002), along with a lot of other films of world cinema. I actually belong to Wasseypur. So I felt even we can have such authentic and raw films. This is how the idea was born. When I met Anurag Kashyap, I realized maybe he was also searching for this type of film. It was just a game of timing.

How challenging was it to write a film whose story spans so many decades and includes so many characters?

The research work was challenging because it’s an old story. The film was real in a way. We have used names like Kala Paani and Sultana Daku. They can also be said to be myths. People keep speaking about them, but nobody has seen them, more so since all these incidents happened many years ago. Some people say they were real, others say they were not. 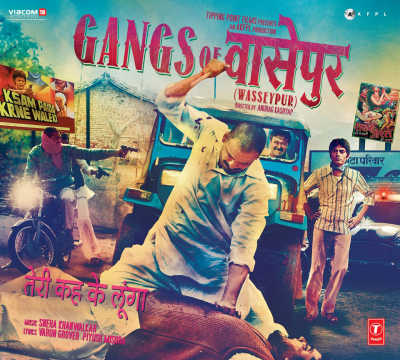 Thankfully, since I was born there, I already knew a few of these things. I also knew whom we should question to get authentic answers. It wasn’t time consuming but there was a lot of work to be done. Every person has a story over there. If you ask four people by the roadside about Sultana Daku, each will offer different inputs, despite the story being the same.

I took pictures of places where these incidents happened. I also gathered newspaper cuttings of that time. And at that time, I didn’t have anything else to do, so I was able to give my 200%.

At the time of the film’s release, I had read an article saying that a few things in the final draft were kept real and some parts were fictionalized. How was this decided?

This is because the place I belong to has a lot of film buffs. There are people who straightaway visit the cinema hall on Fridays after offering namaaz for the 2pm to 5pm show at Ray Talkies. There are fans of Salman Khan, Akshay Kumar, Shah Rukh Khan, Aamir Khan. Dressing up like these heroes is also common there. When they walk, a special background score plays in their own minds (laughs). I was having Salman’s look in the film and Perpendicular (Aditya Kumar) had Sanjay Dutt’s.

Our story starts in 1942. So we showed the years as per the release years of certain films. For example, we showed a reference of Kasam Paida Karne Wale Ki when a character is giving a threat. In another scene, we showed the poster of Dil To Pagal Hai (1997).  We used the references of such films so that people get to know the timeline of the film.

Gangs Of Wasseypur proved to be career changing for so many artistes like you, Nawazuddin Siddiqui, Huma Qureshi, Pankaj Tripathi, Richa Chadha, Rajkummar Rao, Vineet Kumar Singh, etc. How did the casting happen, especially of Nawazuddin who became well known because of this film?

I was quite new back then in the industry. I didn’t know anyone. I didn’t even know Anurag Kashyap earlier. When I went to pitch the film to him, I had only one thought in mind, that only the person who made Black Friday (2007) can make this film.

Mukesh Chhabra was given the task of casting. But Jameel Khan and Jaideep Ahlawat were recommended by Manoj [Bajpayee] sir. As soon as Anurag sir met them, he was convinced they are good. So he asked Manoj sir to send more if he has anyone. When Mukesh sir came on board, me and Nawaz were already in, along with Jameel and Jaideep. He brought in Huma. Richa Chadha’s name was suggested by me as I had seen her short film. Anurag sir also felt she would be a good fit as he had seen her in Oye Lucky! Lucky Oye! (2008). We all had some inputs to give on the casting. And the film had around 250 actors!

You made a five-hour film and released it in two parts in a span of a month. Did any of you feel that this was risky as it had hardly been done before?

I didn’t think of this back then. There was a lot of buzz for the film, especially after it was selected at Cannes that year. Before this film, only one Indian film was released this way in two parts in a span of one or one-and-a-half months, which was Rakht Charitra (2010), and it was a flop. So there was bound to be some doubt in the minds of people. I didn’t know much about production back then. So I was like, what’s the need to worry, the film is good and it will do well. And that’s what happened. We didn’t expect it to be appreciated so much or that it would be considered a landmark.

How was it decided that you will be playing the character of Definite Khan?

When I went to meet Anurag sir for the first time, I had taken a 10- or 15-page-long concept note with me. At that time, Jaideep’s character wasn’t part [of the story]. It had the characters of Manoj sir, Faisal (Siddiqui), Definite and Perpendicular. Anurag sir asked me to play Definite. He felt Nawaz should be Perpendicular. This was on the very first day. But he said all this will happen only after I write an authentic script.

After two and a half months, I met him again with the script. At that time, Aditya was already signed for Perpendicular and Nawaz for Faisal Khan.

Was writing a bigger challenge for you or acting?

You get a lot of chances in writing. Days after writing a script, you might feel there is some research lagging and decide to work on it. But you can’t do this in acting. I have never done theatre. I have never been to FTII [the Film and Television Institute of India], NSD [National School of Drama] or any acting school. So acting becomes challenging for such a person.

The good thing is that I could learn from the likes of Manoj Bajpayee, Nawaz and Pankaj Tripathi at the workshop. Where else can you learn from such people? And this continues to help me even today.

How was it to be directed by Anurag Kashyap?

Different directors have different ways of directing. I hadn’t done much before this film. So my first school was Anurag Kashyap himself. He creates a stage and asks us to do something on our own with our lines. It was fun because of his different approach. I got to learn a lot too.

There are directors who don’t like it if we change even a word from their dialogue. They say they have written the lines after so much hard work, so we should mouth them as they are. I met such directors later. But it is fun when we are asked to speak the lines in our way, without making it sound like they are dialogues. It should sound like a general conversation.

In the film nowhere does it look like we are mouthing dialogues, though the dialogues are famous. They became famous later. “Tumse na ho payega [This is beyond you]” from our film and “Itna sannata kyun hai bhai [Why this deathly silence]?” from Sholay (1975) aren’t typical dialogues. But they became so famous. We never thought that while writing.

Have you seen the memes created on the dialogues of Gangs Of Wasseypur?

A lot! One meme on my dialogue, “Sexy lag raha tha” is seen regularly. I keep receiving it so many times. The line is used in a lot of situations in memes.

How does it feel to see the film still being appreciated after 10 years?

The best part is that even after 10 years, people keep asking about the third part. Whenever I get invited to any college or university, or if I am part of a question-and-answer session, the first question I am asked is, “Sir, part three kab aa rahi hai [when will part III be made]?"So it feels really good to see such fan following even today.

I would like to ask you the same. Is part III planned?

We had thought about it and had also started writing. But it came to a halt because we couldn’t crack it. You can say there is a chance.