Postponement of Hindi films has opened window of opportunity for Marathi cinema, but for how long?


For now, Marathi filmmakers can release their movies without being pushed to the margins in terms of screens and shows. But things may get really tough once the pandemic subsides.

The third wave of the COVID-19 pandemic came as a shock to Hindi cinema which was just beginning to make a recovery from the devastating second wave last year.

The third wave, led by the Omicron variant of the novel coronavirus, has hit the Hindi industry hard. Many production houses have pushed back the release of their films after the Delhi government ordered cinema halls and multiplexes closed.

But the crisis may just have proved out to be a blessing in disguise for Marathi cinema. For the first time in a long, long time, Marathi filmmakers have got the opportunity to release their films without competition from Hindi movies for screens. Some have even advanced their release, from Mahesh Manrejkar's Nay Varan Bhat Loncha Kon Nay Koncha, which was scheduled to be released on 21 January and came out on 14 January, to Aditya Sarpotdar's zombie comedy Zombivli, the release of which has also been advanced from 4 February to 26 January.

Clearly, Marathi filmmakers have decided to make the most of this rare opportunity. The next three or four weeks are  being targeted by films such as Manjrekar's Panghrun, the Ankush Chaudhari- and Vaidehi Parshurami-led Lochya Zaala Re, Avinash Kolte's Faas, Makrand Mane's Soyarik, the Monalisa Bagal- and Mayur Lad-starrer Ka Re Deva and Digpal Lanjerar's historical epic Pawankhind.

Abrar Memon, an exhibitor from Pune, told Cinestaan.com that this is indeed a rare opportunity for Marathi filmmakers and they should take full advantage of the situation. "All Marathi films released this week have got a really good number of screens," Memon said last week. "Even Manjrekar's latest Marathi movie had pretty decent response from the audience, especially in single screens, despite the 'A' certificate. I guess it's because of the controversy, but it doesn't matter as long as it attracts more people to theatres."

While Marathi cinema has free rein over the box office in Maharashtra, the country's biggest cinema market, for the next couple of weeks, the situation was exactly the opposite last month, with Marathi films facing a massive challenge in the form of competition from big-budget, big-star Hindi films like  Antim: The Final Truth, Chandigarh Kare Aashiqui and 83 as well as Hollywood films like Spider-Man: No Way Home. To make things worse for them, the Allu Arjun-starrer Pushpa: The Rise also did fantastic business in Maharashtra.

Despite all this, Hemant Dhome's Jhimma and Viju Mane's Pandu managed to attract crowds even as the third wave was picking up pace. Jhimma recently completed 50 days at the box office and is still playing in theatres.

"Jhimma did extraordinarily well in December," said Memon. "It did excellent business in metro cities and despite the tough competition managed to survive and attract an audience. In fact, on weekends, some multiplexes would allot six or seven shows a day and they would all be houseful. It was a big surprise.

"Pandu also did good business from the first day and is still running in quite a few cinemas even now when it's available on streaming platforms."

Tracking the Marathi box office is tough as every film performs differently in different centres. A trade source claimed that Manjrekar's NVLKNK had been outstanding in areas in central Mumbai like Dadar, Matunga and Lalbaug and in neighbouring Thane but weak In other places in the city. It is also doing decent business in Pune's Citypride chain. Yet, the film isn't doing all that well in another theatre in the same area. This makes it tough to predict the returns. In any case, the daily collection of most Marathi films is below Rs50 lakh.

Actor-producer Pushkar Jog has also decided to use this opportunity to release his movie Well Done Baby in theatres. though it has been available on an OTT platform for the past nine months.

"Me and my producer Anand Pandit sir wanted to make a statement that this corona won't stop us," Jog told Cinestaan.com. "Whether the film becomes successful or not is a different story. If South Indian filmmakers can release their films and earn so much money in Maharashtra, then why can't we Marathi producers release our films?" 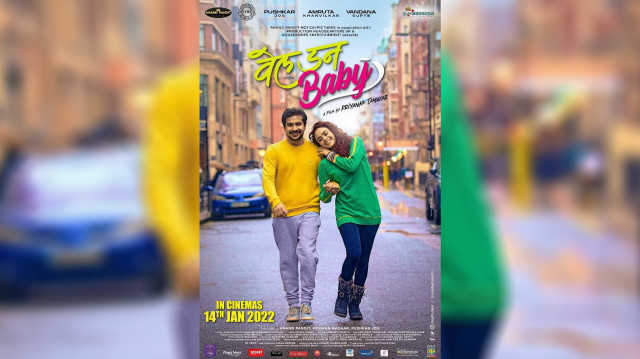 Jog said Marathi cinema had been struggling even before the pandemic and reiterated that this break from Hindi releases is a rare opportunity that filmmakers should capitalize upon.

"Even when we didn't have the pandemic," he said, "it's not like Marathi audiences were storming theatres to watch our films. But that doesn't mean we stop making and releasing them, right? Because if we all start worrying about audience response, then no one will dare to make Marathi films.

"Recently we saw how Pushpa did fantastic business despite the pandemic," the actor-producer continued. "It also did good business in Mumbai. So if you have good content and know how to market it, people will come to watch your film."

Over the past decade Marathi films have struggled to get enough shows at good slots as most multiplexes and single-screen theatres allot those to Hindi films. This had even turned into a political issue a few years ago, but there has been no solution yet.

"Now there are no fresh Hindi films, so multiplexes and single-screens should give a decent number of shows to Marathi films, right?" says Jog. "But even now we are seeing Pushpa, which is already on streaming platforms, have more screens than Manjrekar's film. It's not fair.

"If you are gonna allot 10 screens to some Hindi film and only one or two to Marathi films, then how do you expect Marathi filmmakers to recover their money? And these same people will then say Marathi films don't recover their cost. This is a vicious cycle," he complained.

Memon acknowledged the problem but said exhibitors' hands are tied when a big production house is involved. "There is a new style of business now," the Pune exhibitor said. "These big producers and distributors mail us that they want X number of screens, no matter what, otherwise they won't give us their film at all.

"They don't understand that we also have to allot shows for Marathi films. They don't care. They just want maximum screens for their film at any cost. But if a Marathi film is doing good business, we don't mind giving it more screens. Sairat (2016) is the best example. It did excellent business and theatres allocated more shows to the film."

Thanks to the Omicron variant, January, which had several big-budget films lined up for release and was expected to be a boom month for the business, has been anything but. There hasn't been a single prominent Hindi release this month and if the trend continues for another three or four weeks, things will get very tough for single-screen cinemas. "We have to pay staff salaries, power bills and other taxes, no matter the audience response," said Memon. "But as long as we have films like Pandu and Jhimma, single screens can sustain themselves even if there are no big Hindi releases for a few more weeks."

Senior film journalist and critic Dilip Thakur also believes this is a good opportunity for Marathi cinema to get back on track. "Jhimma and Pandu managed to do good business without big stars," he said. "And both films were polar opposites. This proves people are interested in watching Marathi films; it's just that filmmakers don't know how to reach their target audience.

While these two films became hits, other Marathi releases have had a poor response. "If you ask me," Thakur continued, "the reason is the lack of knowledge about innovative promotion. If you have observed, every Marathi film follows the same promotional strategy, which is wrong. Every film has a different target audience and should come up with unique promotional strategies for that audience."

While Marathi films have a free run right now, when theatres reopen in other states there is bound to be brutal competition among big banners to get the most screens as they rush to release their films. Marathi films, which always struggle to get enough screens and shows, may find it harder than ever, given the huge backlog of Hindi and Marathi films. And Marathi film producers have not found any solution to this yet.

"Yes, it's true, and quite unfortunate," said Jog. "There is a backlog of big-budget Hindi films, plus there are many Marathi films that have been ready for release for the past couple of years and more are being shot. So when things get back to normal, it will be a huge task to find appropriate release dates and get proper screens for our films. Frankly I have no idea how we are going to solve this mess."

Jog also pointed out that there is little or no communication among Marathi producers. "To make matters worse, there isn't any unity among us," he admitted. "Nobody enquires about each other or adjusts release dates. And now, along with Hindi and Hollywood, we are seeing a huge craze for South films among the Marathi masses. I am not saying it's wrong, but it does make things even more difficult for us."