Released on 23 January 1932, the bilingual film was the first talkie by Prabhat Film Company.

The tale of Raja Harishchandra was a popular subject among early filmmakers, with Dadasaheb Phalke, the Father of Indian Cinema, creating the first full-length silent film on the story in 1913.

Driven by the popularity of mythological and historical films, a few others adapted the fable but with little attention to costumes and set design. It was V Shantaram’s Ayodhya Ka Raja (1932), made by Prabhat Film Company, that gave us a definitive film based on the story.

Founded by Vishnupant Damle, Syed Fatehlal, V Shantaram and Keshavrao Dhaiber, Prabhat Film Company was the only studio to be owned entirely by technician- filmmakers.

The company had found success with silent films such as Gopal Krishna (1929), Khooni Khanjar (1930) and Chandrasena (1931) where the mythological or historical subject matter was interpreted through the lens of contemporary reality.

The arrival of talkies in India saw a slew of films being released to cash in on the novelty of sound films. There was a huge emphasis on songs, music and dance, and the era precipitated the advent of singing stars. Despite the mad rush to make sound films, Shantaram was in no hurry to join the bandwagon and took his own time to make the move to sound with the first bilingual film, Ayodhya Ka Raja, titled Ayodhyecha Raja in Marathi, in 1932.

The Marathi version would have been the first sound film in the language but was beaten by Sant Tukaram (1932) by a mere week!

Starring Govindrao Tembe, Durga Khote, Baburao Pendharkar, and Master Vinayak, Ayodhya Ka Raja is based on a well-known story from The Ramayana. The truth-loving Raja Harishchandra (Tembe), the king of Ayodhya, resides comfortably in his kingdom with his queen Taramati (Khote) and their son. Sage Vishwamitra challenges him to give up his kingdom and demands a thousand mohurs or coins, which he is to obtain in the form of alms.

Accepting this fate with folded hands, Harishchandra sets off and tries to earn money. The family faces several hardships and the queen is sold as a slave to earn the requisite amount. Her new owner tries to assault Taramati and her young son intervenes, getting killed in the struggle. Taramati is framed for the killing and is sentenced to be executed. However, the Kashi-Vishveshwara deity brings the boy back to life and reinstates Harishchandra as the rightful king. 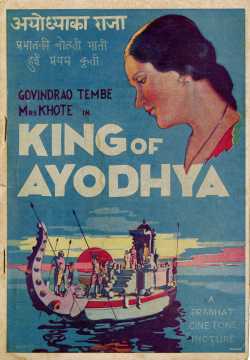 The cost of production was more than Rs1 lakh, an astronomical sum at the time, and both versions of the film, which boasted elaborate, realistic sets, became immensely successful, minting lakhs at the box office, according to the 7 May 1939 edition of The Bombay Chronicle, a now-defunct newspaper. In fact, the Hindi version was even screened in Burma, Java and Sumatra.

The film was photographed by Dhaiber while Damle and Fatehlal served as the sound recordist and art director respectively. Ayodhya Ka Raja also stood out for featuring Khote, an educated Brahmin woman, for the first time as a woman from the upper crust of society.

Although Khote had made her debut with a small role in the silent film Farebi Jaal (1931), the film was a damp squib and it was only under V Shantaram’s guidance in Ayodhya Ka Raja that she was introduced to the profession of acting.

In her autobiography, I, Durge Khote: An Autobiography, she recalled, “Acting had to be natural but attractive at the same time — Shantarambapu taught me this lesson. I wept copiously in one scene in Ayodhyecha Raja but the impact of that entire footage was reduced to some extent by my lack of control over the flow of tears. How to control emotions, how to make them look attractive — this guru of mine taught me painstakingly.”

We get an insight into the gruelling shooting schedule and the filmmaker's keen attention to detail when Khote recalled, “There was no electricity in Kohlapur in those days. We had to be in the studio at the crack of dawn because all the shooting had to be done in natural light. Make-up, costume, hairstyles had to be completed by half-past seven when the shooting began. It went on till about five o’clock when the last rays of the sun were fading. There was a one-hour break for lunch in between. After my make-up was removed and by the time rehearsals for dialogues and songs, the narration of the following day’s scenes, and so on were over, and I was on my way home, it would be seven o’clock in the evening. Then I did my exercises to lose weight and gave myself a massage to take away the day’s fatigue. By the time I was through with the massage and bath and had had dinner at nine o’clock, I was totally exhausted.”

In 1932 alone, Prabhat Film Company made three Marathi films, Agni Kankan and Maya Machhindra, apart from Ayodhyecha Raja. All three were directed by Shantaram. The studio dominated Marathi cinema for more than a decade and fuelled by Shantaram’s thirst for experimentation and the socially powerful themes gave us some of the landmark films of Indian cinema.