The actor recently opened up about his role in the Voot Select web-series, his approach to acting and his journey so far.

Tahir Raj Bhasin in Ranjish Hi Sahi
give your opinion

Like a lot of actors who don't come from a film background, Tahir Raj Bhasin had to struggle in Mumbai for a few years before getting his big break in Yash Raj Films’ Mardaani (2014). It was during this period, which the actor refers to as a time of learning, that he got to appear briefly in Kai Po Che! (2013). During the shoot, he came across actress Amrita Puri and dreamt of working with her someday.

And now he stars alongside the actress in Mahesh Bhatt’s Voot Select web-series Ranjish Hi Sahi, which also stars Amala Paul. Directed by Pushpdeep Bhardwaj, the show is inspired by the veteran filmmaker’s own love story with the late Parveen Babi. Bhasin opened up about the show and his journey in a recent chat with Cinestaan. Excerpts:

What drew you towards Ranjish Hi Sahi?

What really attracted me to this part was the weirdness of the character. It’s a story about a director in the 1970s who wants to show the audience his creative vision but he doesn’t have the perfect script. And in the journey to find that perfect story, he happens to cross paths with a megastar and they happen to fall in love with each other.

It’s about how he gets entangled between the love he has for his wife and family and the star to whom he is attracted. It is in this entanglement and conflict that he manages to discover himself and his story, and he realizes the fact that he didn’t have enough in him as an artiste to give to the world.

What was the most challenging aspect of playing Shankar?

I think whenever you are involved in a love triangle, it is very demanding because a series is never shot in a linear fashion. On the same day, you might be shooting for the third and eighth episodes. So you have a romantic scene with an actor, which is a passionate moment, and then you might have a conflict scene in episode eight, which you have to shoot for after lunch. So, maintaining that balance was a big psychological challenge.

But kudos to Bhatt Sahab and Pushpdeep for handling us with kid gloves. When you are playing such an emotionally volatile and vulnerable part, you tend to carry some of it even off the set during breaks when you are sitting in your van. I remember it being a very challenging time emotionally because no matter how experienced you are as an actor if you are shooting for a series for 90 days, there are certain aspects and baggage of the character that you carry back home with you. Letting go of that at the end of the day and coming back with the same energy on the set was often challenging.

Mahesh Bhatt, the creator of the show, is an experienced veteran while Pushpdeep, the director, is relatively new. How was it dealing with both?

There was great energy on set because Pushpdeep was energetic. He came with a host of new ideas. He had thoughts about how to use technology and make it look like a period show without overselling and over-pushing the period so that it didn't look like a caricature. Bhatt Sahab, of course, has the depth of experience; romance, romantic conflict and music is his forte. So for us, it was the best of both worlds. We had new-age thinking because it was for an OTT platform, which generally attracts a younger audience. And we had the wisdom of how to construct a scene and how to edit, perform and light it up. It was a masterclass in action. 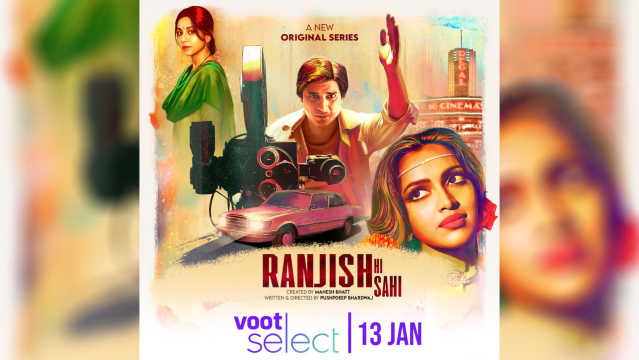 As soon as the trailer was out, comparisons were made with Mahesh Bhatt’s life story. How much of the series is borrowed from real life?

I would say 50% of the series is inspired by true incidents. And the remaining 50% is fictional. It would not be correct to call it a biopic because if it were so, it would have to be factually correct and my character should look and behave like Bhatt Sahab, who Shankar is not. But there are definite incidents and themes that are inspired by his experiences. Creative liberties were taken.

Amala Paul is a star down south. What was it like to work with the actress in her first Hindi project?

It was beautiful. She brings collaborative energy to the sets. She has got very expressive eyes. For an actor, it doesn’t matter what language or medium you have been working in if you can express emotion through your eyes without saying anything. That’s half the battle won. But she puts in a lot of effort. I can recall her rehearsing her lines in Malayalam to get the right emotion and then translating them into Hindi and practising them. It was really inspiring to see an established star make that kind of effort for her Hindi debut.

And of course, it was great to work with Amrita Puri. I have an interesting backstory with her. The very first part I did in Bollywood [the Hindi film industry] was a five-minute role in Kai Po Che!

You played Ali in that film.

Yes, I played the senior Ali. I had only one day of work on the set. I remember seeing Amrita emerge from her vanity van. I thought to myself at the time that I would love to work with her one day. It was like things working out the way you had dreamt!

When did you decide to become a full-time actor?

I used to participate in stage plays and debates in school as extra-curricular activities. Then in college, I decided to be a part of a theatre group. I always thought I was very comfortable performing on stage. It was my zone. It came to me, I won’t say naturally, but I was at ease. I joined acting workshops at the age of 14.

After college, I decided that it was something I would be interested in pursuing full time. And I went on to study film, acting and media for my master's degree and then I moved to Bombay. It took me about three years. I don’t really look at it as a period of struggle. It was a period of a lot of learning.

Mardaani was your big break. Before that, you had a period of learning, as you like to put it. Do you feel much more secure today?

I feel a lot more accomplished. I feel blessed. What an actor wishes for the most is a fan base that really awaits what they are going to be creating and shooting for. When I put out the trailer of Ranjish Hi Sahi and other OTT series releasing in the same week [Yeh Kaali Kaali Aankhen], I was overjoyed with the kind of enthusiasm people had. This means there are people who have been following you; watching those 10-minute parts, which became 20 minutes and then one hour and today, this. They have been cheering for that progress and that’s the most humbling part.