After a box-office boost in December, exhibitors stare at uncertain future again


After Pushpa: The Rise and Spider-Man: No Way Home brought audiences and revenues in, theatre runners are unsure what the future holds, as the Omicron variant of the coronavirus rages.

Representational photo
give your opinion

Cinema halls saw a few good days in November last year with the release of Rohit Shetty’s Sooryavanshi (2021). But other releases that followed, like Bunty Aur Babli 2 (2021), Antim: The Final Truth (2021) and Satyameva Jayate 2 (2021), only flattered to deceive and did nothing to ease exhibitors' woes.

December brought the smiles back. Explaining how the month went for cinema owners, exhibitor and distributor Sunny Chandiramani from Sunshine Studios told Cinestaan, “December was fruitful, as it was way better than November. In some class cinemas, Chandigarh Kare Aashiqui (2021) performed well in the first two weeks. Then Spider-Man: No Way Home and Pushpa: The Rise were mammoth.”

A lot was expected from Kabir Khan’s cricket drama 83, but the film did well only in select metropolitan centres. “83 was very good in Mumbai, Pune, Delhi, Bengaluru and Chennai," Chandiramani said. "The shows after 4pm were full. But it was a city-oriented cinema. In B and C centres it was a disaster. We were helped [during this time] by Pushpa as the collections were next level."

Abrar Memon, an exhibitor from Pune, echoed the sentiments. “83 is a masterpiece," he said, "but it’s for the classes. When around 30% of the film is in English, it becomes a problem.”

83 fared better in multiplexes. Vishal Sawhney, chief executive officer (CEO), Carnival Cinemas, told Cinestaan.com, “The month of December was very good. We got the audience back to the theatres. 83 is a fantastic film. It did well in metros than in other centres. As we talk, it still continues to do decent [business]. It had a slow start but had a sustained continuity to it.”

Rashmikant Bhalodia, owner of the Galaxy theatre in Rajkot and president of the Single Screen Association of Gujarat, said 83 fared poorly in Gujarat. “It hardly got any audience," he said. "People were interested in MS Dhoni (2016) as it was his life story. But in 83, we already know we are going to win, so what is there to see? And people can see the original matches [of the 1983 World Cup] on YouTube, so why would they watch the staged version?”

He added, “It was Pushpa that sailed us through, despite being a South movie. Having said that, there are people who are liking 83 a lot. And Ranveer Singh is actually looking like Kapil Dev. He has done very well. He has even spoken like him.”

Pushpa was the saviour for Memon, too. “Pushpa changed everything," the Pune exhibitor said. "It is continuing to do well even when the [COVID-19] cases are high. Earlier only the masses used to come for Pushpa. But now even the family crowd is coming in. Pushpa will ensure that we keep going.”

There have been several Hindi films in which we see the villain dying, only to resurface later, mostly at the climax. Something similar seems to be happening with the COVID-19 pandemic. Just when it appeared that the cinema business was returning to a level of normalcy, the Omicron variant arrived. The subsequent rise of cases has hit exhibitors and distributors hard.

The Delhi government immediately closed down cinema halls indefinitely. Following this, the release of some big films like Jersey, RRR and Radhe Shyam were postponed as producers decided to wait for the situation to improve. Hence, January, which was expected to be a big money-spinner, has proved to be anything but.

Sawhney said, “It is sad if I speak from the cinema perspective. Absolutely, the industry has been hit in a big way again. We continue to showcase some of the movies that are still going strong. So there is Spider-Man, Pushpa, 83 and we also have regional content, which we are doing in pockets. Having said that, it hasn't been the month it was forecast to be.”

Memon added, “Delhi shutting down theatres frightened producers. We had high hopes after November and December. Rohit Shetty showed courage and released Sooryavanshi. But now there is uncertainty again.”

With the absence of fresh releases, a few single-screen theatres have temporarily shut down again. “If [new] films don’t release, it is as good as a lockdown for theatres,” said Memon. “You can’t run theatres in such a condition.

“Today we are working with 50% occupancy, but our costs are still 100%," he continued. "We can’t tell our staff that we will pay you only 50% of your salary. Costs like light bills are the same.”

Agreeing with Memon, Chandiramani said, “It’s better to keep it shut than to run with low occupancy.”

Although theatres in key states like Maharashtra and Gujarat remain open at the moment, looking at the rising number of cases all over the country, exhibitors from these states aren’t dismissing the possibility of a shutdown again.

“We are prepared for the announcement,” said Chandiramani. “We also need to see what can we play after Pushpa. The Omicron [variant] has spread more in cities than in smaller centres like Sangli and Kolhapur. Over there, [the November Marathi release] Jhimma (2021) is still doing well. Same is the case with [the December release] Pandu (2021).”

Sawhney of Carnvial Cinemas added, “Our fingers are crossed. But the way the COVID numbers are growing, it’s scary. I think just like you and me, the government is also keeping a very close watch. So we are in tandem with the government and the steps it’s going to take. Neither you, me or anybody would be in a position to say if we are looking at a lockdown. It could be if the numbers keep soaring.”

Bhalodia also said he would not be surprised if Gujarat theatres were shut again. “We haven’t heard any such thing yet," he said, "but there is a chance. They cancelled [the] Vibrant Gujarat [investment summit] this year, so there is a chance of theatres shutting. As we know, theatres are the first to be shut and last to be reopened. Till the time these films [Pushpa and Spider-Man] are doing well, we will keep running. Else, I will have to shut [temporarily]. I had done that before the release of Sooryavanshi.”

Memon said restarting cinemas after they are shut for a while is the most difficult part. “The biggest issue is that a lot of our staff has decided not to work in the theatre industry again. We paid salaries to our staff, but that isn’t the case everywhere. So they are looking for jobs that are safer,” he said.

Moreover, as Memon had pointed out earlier, cinema halls have still not been given relief from electricity charges, property and other taxes. Nitin Datar, chief of the Cinema Owners Exhibitors’ Association of India (COEAI), has sent several letters to the Maharashtra government regarding relief from such taxes for the period when cinema halls were shut by the government's order.

The last time Cinestaan.com spoke to Datar, he said the COEAI had held some meetings with government representatives, but they had only got lip service. Things are still the same, he said. “Nothing has happened on that front. Not a single demand has been met,” he said.

Members of his association do not want theatres to be shut again in the state. “Theatres are the first to get shut and the last to reopen,” Datar said, echoing Gujarat's Bhalodia. “We are urging the [Maharashtra] government to do justice to us like they do for other businesses. We don’t want theatres to be shut. We have been taking precautions and we will.”

He added, “25 single-screens are shut in Mumbai. Only one is running in Pune. Nashik doesn’t have any single-screen working. The government isn’t providing any financial help. Some theatre owners have taken loans and are somehow running cinemas at 50% occupancy. So, even if the collections of a film are high, theatre owners aren’t earning much. Multiplexes can manage.” 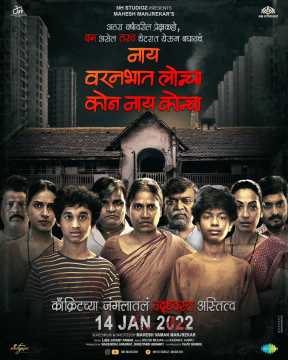 The good thing is that the Maharashtra government has said cinema halls will keep running, at least for now. This has seen Mahesh Manjrekar advance the release of his Marathi film Nay Varanbhaat Loncha Kon Nay Koncha by a week to 14 January. The makers of another Marathi film, Coffee, are also releasing it the same day.

Chandiramani sees this as a positive sign. “Earlier there was a fear that the public might not come [to theatres for fear of COVID-19],” he said. “But that isn’t the case now. They [producers] know that if their content has meat, the audience will come to the cinemas.”

Taking a similarly positive stand, producer Anand Pandit said in a statement, “We have survived to tell the tale and there is no reason why we cannot deal with the latest challenge. I feel we are better prepared today than we were when the pandemic first took us by surprise. From not knowing what to do next, we are now shooting films in bio bubbles, managing pre- and post-production, even travelling. The show will go on, with utmost caution, of course.”

Correction, 12:56pm: An earlier version of this report said Vishal Sawhney was COO of Carnival Cinemas. He is the CEO.