Anil Kapoor's enthusiasm is infectious: Aditya Roy Kapur on working with the 'youngest superstar' in Malang


Two years ago, the Aashiqui 2 (2013) actor opened up to Cinestaan about his experiences while shooting for the action thriller, which was released on 7 February.

Photo: Courtesy Aditya Roy Kapur on Facebook
give your opinion

Anil Kapoor might have attained stardom over three decades ago, but he continues to dominate popular culture, especially by way of memes that are familiar to every millennial. This is not surprising to Aditya Roy Kapur. The Aashiqui 2 (2013) actor starred alongside the senior Kapoor in Mohit Suri's action thriller Malang (2020), whose second anniversary is today.

When Cinestaan caught up with Roy Kapur prior to the film's release in 2020, he spoke about working with the veteran actor, dealing with the physicality of the role and working with filmmaker Mohit Suri.

Asked about his collaboration with Kapoor, he joked, "I am working with the youngest superstar. He has got so much potential. I am sure he is going to have a long career."

The artiste added that he was inspired by the veteran's extreme enthusiasm about the craft. "His energy is infectious. The interest, and how excited he is to do a good job, to do justice to do a film is really infectious. I hope that after many years of doing this, I have half of his exuberance, energy and wide-eyedness," he said, describing how he himself had to take a sabbatical to alter his own perceptions about acting.

The actor revealed that his senior co-star was on the ball even when it came to fitness. Roy Kapur, who was on a special regimen to lose weight before beefing up for Mohit Suri's film, said, "On the first day on the set, he asked me, 'Tu kya khaata hai?'. I said, 'Sir, I am on this diet'. Immediately, he replied, 'Number de'. He took down the number of my dietician. Three days later, he told me, 'I am on your diet. I am feeling good. I am feeling energetic'."

He added, "He [Anil Kapoor] keeps saying that he works with youngsters and wants to learn from them. To have his ability to see what is special in someone else is a great quality to have. He is such a senior actor, and sometimes, directors avoid saying anything to veterans on set. But he encourages directors to speak to him about everything. 'Don't think just because I am senior, you can't say things. Say it to me', he would say."

The physicality of the role was challenging for the young actor. The trailer took fans by surprise with his beefed-up avatar being unveiled latterly in the video. The actor revealed that muscling up was a condition that director Mohit Suri had placed even before the shoot had begun. 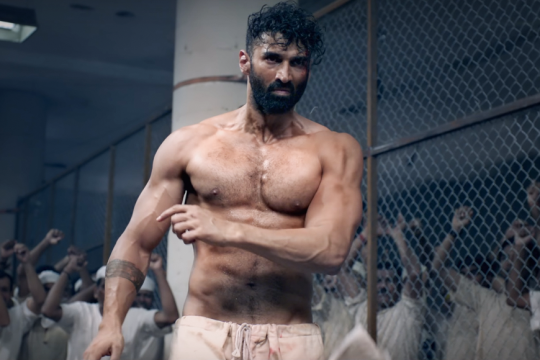 Roy Kapur said, "This film, physically, has been extremely demanding. It was as tough to do the lean portions. You have to be so lean that you get to eat very little food. You are shooting tough stuff through the day. I had to be on a regimented diet. When you are putting on muscle, they often tell you that you need 10 weeks. Building muscle is tougher than losing fat," he said.

"We were shooting the young portion, and by the end, I had to start building muscle. I had a very short period in which to build my body. Mohit had said, 'I won't shoot it unless you give me the body'. You have to convince the audience that you can beat up all these guys, otherwise, it won't come off. I treated it like being in the army."

The film saw the actor take on an action-oriented role after playing a series of romantic vulnerable characters. Speaking of the role, Roy Kapur said that he was involved with Suri's script even before it came into formation.

He said, "I have been involved in this film right from the start. Mohit had an idea, and he told it to me. I've actually been part of the process since the nascent stages. We started getting people on board. We got [writers] Aniruddha [Guha] and Aseem [Arrora], and we started writing the film. Mohit and I kind of realized that we had partied together in a rave in Goa. We never knew we were both at that party. So, we thought about setting this in that world. It is a world that has not been explored, but exists."

The filmmaker and actor har earlier teamed up for Aashiqui 2 in which the latter had his breakthrough role. Speaking about the director, Roy Kapur said, "He is always about emotions. His emotional radar is still as strong as ever. He is obsessed with films. He is more experienced, but essentially he still has the same passion. He may be young, but he is a very senior director. He has made close to 12 to 13 films. So, for him to still have that passion is amazing. He now has kids, and that has enriched his life."