The producer opened up to Cinestaan.com about his upcoming projects, adapting works and his acting debut, among other things.

A megabudget project led by Ajith Kumar, Valimai seemed to have everything going for it when the project was launched back in 2019. But the arrival of COVID-19 in 2020 threw a spanner in the works. The pandemic, as well as the film's multiple schedules and tricky stunts, compelled veteran producer Boney Kapoor to muster all his tenacity and experience to see the project through to the end. The film is now ready to be released in theatres on 24 February.

"I have been in this industry for over 40 years and challenges are part of filmmaking. This time it was a pandemic. There have been challenges of all sorts at points in time. One has to overcome them and, at the same time, not lose focus," Kapoor told Cinestaan.com over the phone.

Exclusive: Ajith did 90% of stunts in Valimai himself, says producer Boney Kapoor

Valimai is the latest in a spate of impressive productions by Kapoor. From Tamil remakes of Article 15 (2019) and Badhaai Ho (2019), the producer is working on several adaptations. These include the Hindi remake of the Malayalam hit Helen (2019), featuring his daughter, Janhvi Kapoor.

Apart from discussing Valimai, the producer spoke about the differences between audiences in the North and South, adapting works in multiple languages and his acting debut, among other things. Excerpts:

With Valimai ready to be released in theatres, you must feel relieved. There must have been a lot of pressure.

The pressure was always there with a film of this magnitude, which was waiting to come out. Obviously, holding back such a large-scale film came with pressure. I am elated with the response we have got, and we have been getting throughout.

What are your expectations for Valimai?

Expectations are definitely positive and high. I have this instinct that it will be accepted and lapped up by the audience. It is an Indian story and an Indian film. It is a film about a hero who is fighting the war against evil. He is a conscientious person who wants good and wants evil removed from society.

How difficult was it to make the film in light of the pandemic, lockdown and other restrictions?

I have been in this industry for over 40 years and challenges are a part of filmmaking. This time it was a pandemic. There have been challenges of all sorts at various times. One has to overcome them and, at the same time, not lose focus. I am fortunate that my team was absolutely focused till the end.

Some of the sequences were shot during the pandemic. Any time we had an opportunity, they were ready to shoot. Thanks to Ajith as well, who was the first person to inspire everyone to get up and shoot. He was so immersed in the character and the film that he was ready to shoot any day any time. Whenever he felt that there was a window, he would galvanize the whole unit on his own and the director, H Vinoth, was equally passionate about the film. So they made a good team, and I was fortunate to have both of them leading the crew. Although it was a little scattered, we kept making little progress, according to what was in the director's mind. 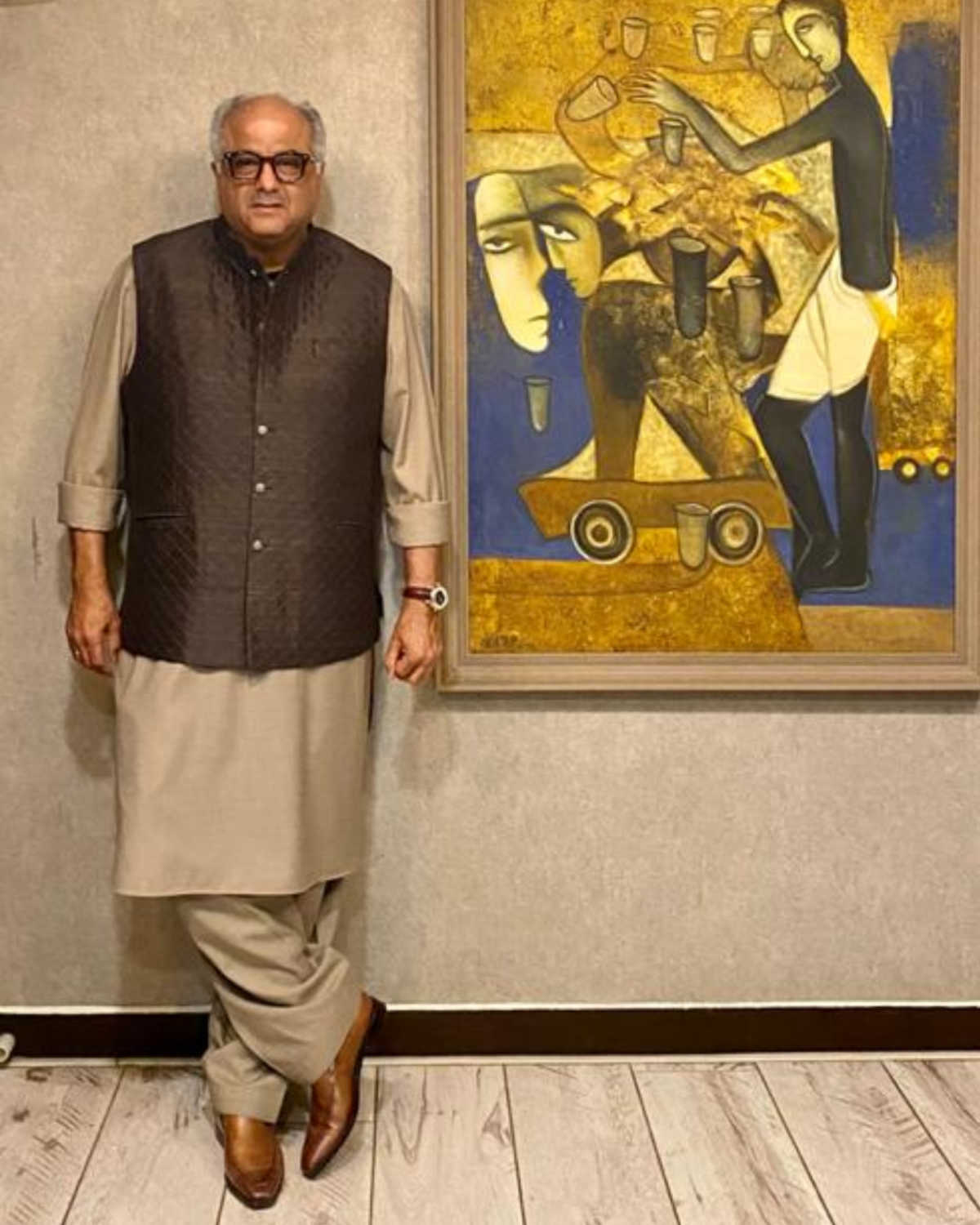 This is your second collaboration with Ajith, after Nerkonda Paarvai (2019). You are also preparing for the release of AK61?

We have put up the set, and we are starting.

What led to the decision to release Valimai in Hindi?

It was decided even before the lockdown. #ValimaiUpdate had become such a big trend on social media. Even the IndiavEngland trend saw people ask the same question. Even some MPs were asked questions about Valimai. I did not respond because we did not want to hype the film during the pandemic period.

Valimai has been a labour of love, says Huma Qureshi

There was even a poster saying 'Boney Kapoor Missing' (laughs). I don't think it has ever happened that fans chased a producer, asking him to release a film, with posters plastered over the state.

How is the fandom in the South different?

The fans in the South are very very loyal. If they are a fan of the star or actor, they remain loyal. Here, the fans shift their loyalties very soon.

To be honest, yes, it has given us encouragement. But at the same time, the exhibitors from the Hindi film belt were always telling me that I should dub Valimai. Finally, since the groundwork was already there as far as the exhibitors are concerned, they were ready to accept it. We had all this time in between and dubbed it in Hindi.

The response to Pushpa is encouraging, and it also was an incentive. We hope we do some good business in Hindi as well. I don't want the film to be compared with Pushpa but my film has its own merit. Let's see how it works.

There are increasing signs that Hindi cinema is facing stiff competition from other film industries. Audiences are more willing to venture beyond the language barrier.

One reason for it is OTT. You see, now because of OTT platforms, you get subtitles for films across languages. If you hear about any good films in any language, you will watch them. I have watched Turkish shows, various language films. I feel film is basically a visual medium.

What are the main challenges you face when adapting films into different languages? You are already working on a Hindi adaptation of  Helen (2019), as well as Nenjukku Needhi (2022) and Veetla Visheshanga (2022).

I have always had a close connection with the South. The first film which I produced was Hum Paanch (1980). It was a remake of the Kannada movie Paduvarahalli Pandavaru (1978). That's where my association with South Indian films started. I used to travel a lot to Chennai. There I got acquainted with the audience's palate, understood the culture and came to know the nuances.

At the same time, when South Indian producers can make a Hindi film, why can't a Hindi producer make a South film? There have been big producers like AVM Productions, Gemini Studios, Nagi Reddy, Rama Naidu and LV Prasad Studios, who made Hindi films and adaptations successfully. Their formula was the same. They would buy the rights to a Malayalam film, make it in Tamil after some adjustments. If it was successful in Tamil, they would make it in Telugu, with more commercial elements. If it worked in Telugu, they would then make it in Hindi. They are all Dadasaheb Phalke Award winners, with the highest awards in the film industry.

Is there a marked divide between Hindi films made for urban niches and massy entertainers?

People are under the impression that multiplexes are everywhere. Of course, multiplexes are present in A and B sectors and have entered B and C centres. Can you imagine the number of 3D theatres in India? It is almost 4,000, probably more. This means that they are present outside the metros as well. In a place like Gorakhpur and Jhansi, small cities have converted their single-screen cinemas into two-three screen multiplexes.

But the audience has not changed?

They remain 100% the same. Basically, the culture does not change. A percentage, especially the metro audience, and some of the critics who feel superior criticizing the cliched, mass pictures [have changed]. Sometimes they have their noses up, thinking 'This film looks like an old model'. But that's the one that works. Manmohan Desai made successful films with the same formula, no?

Maidaan is the next big Hindi production in the pipeline. It faced quite a few challenges.

Yes, so far, it's on schedule. I have my fingers crossed and hope nothing comes in the way. It is a very different project, and so far, it's been a challenging journey but we are very happy and satisfied with the results and hopefully, will achieve the target.

Does the release of Prithviraj on 10 June pose a threat? How do you view it?

The last year also saw you try some new things. You are acting in Luv Ranjan's next film, with Ranbir Kapoor. What led to the decision, and how was the experience?

Well, my kids pushed me into doing that, accepting it. The experience was absolutely fabulous. I have always enjoyed making films, but I have been behind the camera. This time I have enjoyed the benefits of being in front of a camera. Being pampered, being looked after. My job was usually to take care of everybody, this time I was on the other side.

Has that given you a taste for it? Will you try more of it?

Well, let's see. If people like it. I don't know how I have performed and what I have done; I have just been myself. If the director likes how I have performed, and if there is something meaty which comes up... For me, the crew has got to be exciting. The story has to be exciting. If I feel that, and the elements are in place, I think I can do it. Then I will get into it.

I remember watching you in AK vs AK (2020). It was enjoyable and surreal at the same time.

I am perhaps doing the same stuff. Playing Ranbir's father this time. The only difference is that there I was Anil's (Kapoor) brother and Harsh's uncle; here I am Ranbir's father. I will behave just the way I behave. Of course, within the parameters of what the writer and director have written.

Speaking of Luv Ranjan, you are also working with him on the remake of the Tamil film Comali (2019). How is that working out?

It's being scripted and perhaps, by July-August, we will start shooting. We are also working on an adaptation of F2: Fun and Frustraton (2019), are working on the second half [of the script]. It will have some adaptations and nuances and will be a lot funnier than the original film.