Was surprised when Mahesh Manjrekar offered me an important role in Panghrun, says Amol Bawdekar


The actor plays a middle-aged widower, Antu Guruji, who gets married to a girl young enough to be his daughter.

Amol Bawdekar plays a middle-aged widower, Antu Guruji, who gets married to a young girl at the behest of his family in Mahesh Manjrekar's Panghrun (2022).

Bawdekar, who is also a professional singer, has been active in the film industry for over a decade and has acted in a few films and TV shows, but Panghrun is easily the biggest and most important project of his career yet.

"The first and foremost reason I said yes to this film is that it is Mahesh-dada's film," Bawdekar told Cinestaan.com. "He called me to meet him and asked whether I would like to work with him. Looking at his filmography I don't think anyone would have said no.

"Getting an opportunity to work with him was itself a big thing for me. When he asked whether I'm ready to work with him, I immediately said yes. At that time I had no idea what my character was in the film. So when he narrated the script to me and told me I'm going to play the role of Antu Guruji, I was pleasantly surprised that he was offering me such an important role. And there was no question of refusing such a rare opportunity."

Giving some details about his character, Bawdekar said, "I play a middle-aged widower named Antu Guruji. He has two daughters. He is an innocent, good-natured man. And everybody in his village is fond of him and loves him and, most importantly, respects him. And that is why the villagers urge him to get married again."

This is Bawdekar's longest role in a film till now and though there was pressure, his previous work experience came in handy. "Antu Guruji is such a simple and innocent man that you normally don't get to meet such people in real life," he said. "The thing that really helped me was that I had played Sant Tukaram and Gora Kumbhar in the past in films and TV shows, so I had a basic understanding of how to bring out the innocence and simplicity of this character without ever making it look forced. 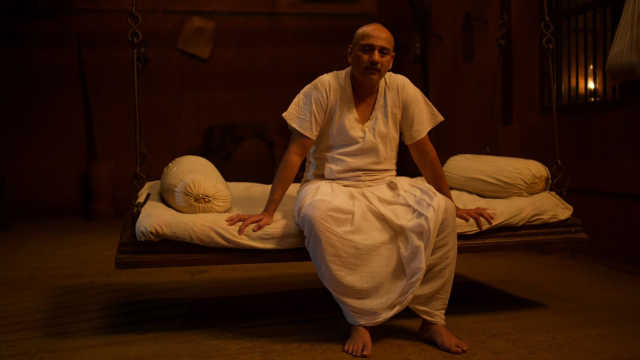 "Also, the way Mahesh-dada narrated the script and described my character, I immediately got the gist. And then, when we began the shoot, Mahesh-dada guided me whenever I faced any issue or had any doubts."

The film is based on renowned poet and author Balakrishna Bhagwant Borkar's book, but with certain changes to suit the visual medium. "I have read the book and it's a really good story," Bawdekar said. "But we have taken only the basic premise and knitted a new story, so even if you have read the book, you will find some surprises while watching the film. Films and books are two different things and each has its advantages. Film is a visual medium, like you can cover 30 or 40 pages of content in a three-minute song."

Was a bit scared to work with dad Mahesh Manjrekar in Panghrun, says Gauri Ingawale

The film was shot in the Konkan region of Maharashtra. "Konkan is such a beautiful place and I'm also from Konkan, so for me it was like my second home," Bawdekar said. "It's a period film. We are showing the period when the Portuguese were ruling Goa and [parts of the] western coast. So I don't think we would have found a better place than Konkan for a story like this. We shot this film in Guhagar and Malwan. That whole place has such a calming effect."

Interestingly, most of Bawdekar's projects have been period films and shows. "I guess it's because of how I look," the actor-singer said. "My facial  features are such that most of the time I end up getting offers to play saints or some historical characters.

"But it's not as if I only do period roles. I have also played a villain and a schizophrenic guy. But it's true that the historical characters [I have played have] ended up becoming more popular. And because of my appearance, people only remember my historical roles, so now many think I only do period films."

Explaining why he hopes people watch the film in theatres, Bawdekar said, "In today's stressful life, man is looking for peace of mind somewhere. Everyone wants to have at least five minutes to think for themselves. The comfort you feel when you come home after a hard day's work and sit quietly with a glass of water, the same comfort you will get while watching this movie."