25 years of Pardes: Filmmaker Subhash Ghai remembers the making of the film

The film was shot in both the US and India and featured memorable music composed by Nadeem-Shravan.

The veteran writer-director shared his feelings on the film’s important milestone. “Pardes is very dear film to me,” Ghai said. “I would like to congratulate the entire cast and crew and especially the audience for continuing to shower their love even after 25 years. My team tells me that people keep recalling the iconic scenes in the digital arena even today.” 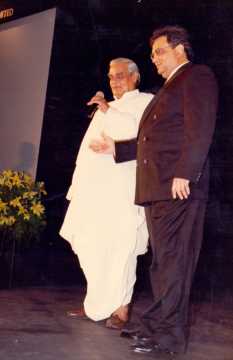 The music launch of Pardes was graced by the former prime ministers Atal Bihari Vajpayee. Ghai recalled, “Pardes celebrated the rich culture of our country. I had approached late Arun Jaitley ji to invite Vajpayee ji to our music launch. Also, the song, ‘I Love My India’ was released ahead of India's 50th Independence Day. It was a big coincidence.”

He added, “It is another coincidence that today I am writing and composing a song for a video 'Ghar Ghar Tiranga' to celebrate the 75th year of our Independence.”

Remembering the audience reaction at the time, he said, “I still remember people clapping and humming 'I Love My India’ while it was being played on the screen. What's more memorable is their reaction to my cameo wherein I can be seen singing on screen. It embarrassed me, but it is a moment that I shall always cherish.”

Ghai also shared his notes that he told lead actor Khan. He said, “I kept reminding him in every scene and song that he has to avoid his compelling, romantic side to justify Arjun's character. It was challenging for him but he nailed it!”

This was the first time that Khan and Ghai were working together.

The filmmaker revealed that he was overjoyed over the fact that his film was celebrating its silver jubilee. “I pour my heart and soul into every film of mine. Filmmaking is indeed a business but a business of the heart wherein you pour out all that you have for the audience to rejoice and relish,” he said.