The veteran actor, and son of thespian Balraj Sahni, goes down memory lane in the book Strange Encounters, which looks back at his experiences in Russia, India, and the Hindi film and television industry.

When I got back after six years of gallivanting in the USSR, I was at a loose end. I spent my time hogging rich food, drinking beer in the afternoons and imbibing vodka in the evenings, and chasing girls far into the night. Dad [Balraj Sahni] said nothing. That was the main reason why I was a spoilt brat in the first place. Dad didn’t reprimand me even once during his lifetime. He was an indulgent father.

But finally, in desperation, watching me gadding around doing nothing, he asked a producer friend of his to offer me a role in a low-budget, black and white film. Having little else to do (and quite fed up with sponging money off my father) I said yes to this film to fill up my otherwise free time. It was a temporary affair in any case. I had no intention of continuing in the profession after this film.

The producer tried his best to have me thrown out of the film and I hoped he would. I didn’t know Hindi and fluffed my dialogues constantly and there were countless retakes. My pauses were all wrong and my pronunciation was atrocious. It was Hari Bhai (Sanjeev Kumar) who bailed me out every time by convincing the producer that I was, in fact, an immensely talented actor and was giving a sterling performance in a new style that would make a mark in the film industry.

Needless to say, I was doing nothing of the kind. My preoccupation with vodka and pretty girls continued on the side; the shooting of the film was just a pastime.

But, much to my surprise, this black and white, low budget film was a colossal hit. It didn’t make much difference to me, however. Life continued as before and I gave myself up to wine, women and song. But hardly had I embarked on my hedonistic lifestyle again that I was flooded with offers for new roles in Hindi films! I was stumped. 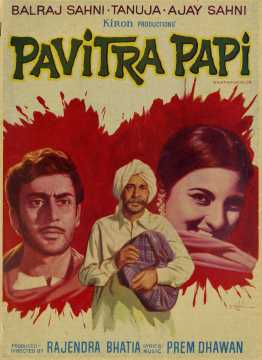 Among other things, I was asked to play the main lead in a film that I had taken two years to write and, as a last resort to acting, had offered to direct: Pavitra Papi. I was thoroughly put off at the prospect of acting in the film instead and declined the offer vehemently till Dad politely reminded me that “beggars can’t be choosers”. He was right. I was out of a job and sitting around doing nothing. I finally said “yes” to doing the role, quite sure that this would be the last and final one.

The other day a lady came up to me at a party and said: “I have wanted to meet you since I was a little girl! I saw Pavitra Papi and I can never forget the song you sang in that film! You were marvelous!”