Revisiting Aarti (1962): Powerful portrait of a working woman driven by her ideals


We revisit the family melodrama, released on 10 August 1962, which was Rajshri Pictures’ first production.

The film distribution wing of Rajshri Pictures was established in 1947, and in 1962, the production division was set up with the first release being Aarti (1962). Produced by Tarachand Barjatya, the family melodrama was directed by Phani Majumdar.

Based on the Gujarati play, Sanskar Lakshmi written by Prafulla Desai, the film starred Ashok Kumar, Meena Kumari, Pradeep Kumar in the lead roles. It also marks the debut of actor Ramesh Deo. The feature film was released on 10 August 1962

The film is a love triangle where Aarti (Meena Kumari) is a doctor who feels that her study of medicine is meant to serve people. She is to be married to Dr Prakash (Ashok Kumar). One day, Aarti meets Deepak (Pradeep Kumar), who saves her from drowning. An unemployed poet, he is a man of simple means.

Aarti falls in love with Deepak, and she observes how Prakash’s aim as a doctor is to make money, which is at odds with her thinking. When she breaks off her engagement with Prakash, he does not take the news of being jilted well.

On the other hand, Deepak feels a bit odd that Aarti would love her comfort-filled home to come live with him but she reassures him that love is enough for her.

The two get married, and Prakash also marries Ramola, though it is evident that he is not in love with her. Despite there being a stack of problems in Deepak’s home, Aarti works tirelessly to improve their lives, even bearing the insults of her sister-in-law (Shashikala) with a smile. However, Prakash is still nursing a bruised ego and wishes to possess the one who got away. 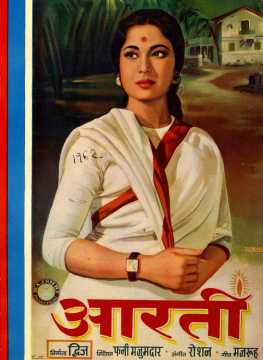 The emotional film depicts human passions and the ways in which we are shaped by them. Although Aarti is a suffering woman in part, as she is misunderstood by her husband, but she is also someone who stands up for herself. In refusing to marry Prakash and decidedly shunning his advances and proposals, she exercises her agency.

In choosing to do her duty despite her husband’s objection, she displays her quiet determination. There is a powerful scene, when Deepak accuses Aarti of harbouring feelings for Prakash, she tells her husband to not debase himself in her eyes by making such accusations at her.

The Hindi film does reinstate traditional ideals but offers an educated, strong willed heroine as well. This is notable especially given that this is a Rajshri Production, a studio not quite known for presenting us with strong women characters.

Aarti clearly belongs to Meena Kumari and although both the male leads have given commendable performances, hers is the character that draws us in with her innocence, beauty, and selfless love.

In an old interview, Ashok Kumar spoke about Meena’s acting, saying, “Meena was a natural actress. She was very choosy but once she accepted a role she put her heart into it and it’s not surprising that she’s still remembered for her sensitive portrayals. We did some 17-18 films together and in that time built up such a good rapport that, as is common with me, sometimes when saying a dialogue I’d add a line not in the script and even as I worried about how Meena would react, she’d surprise me with just the right response."

Book excerpt: Sanjeev Kumar’s dedication to the craft of acting

Interestingly, Sanjeev Kumar or Hari, as he was known before his screen moniker, was originally considered for the role that ultimately went to Pradeep Kumar. His biograpy by Hanif Zaveri and Sumant Batra, An Actor’s Actor: The Authorized Biography of Sanjeev Kumar, reveals that Sanjeev had gone to Tarachand Barjatya since the studio was looking to cast a male lead for the film.

Although Barjatya could not see the actor in him, director Phani Majumdar assessed the diamond in the rough. “There was a certain earnestness in Hari’s face, a compelling sense of honesty, that made Majumdar feel he could do justice to the character…Soon, Majumdar talked Barjatya into casting Hari as the male lead and Hari was overjoyed. This would be his dream film. Not only was it being made by some of the biggest names in the industry, but he was also to be seen opposite Meena Kumari, his favourite Bollywood [commercial Hindi cinema] actress.”

However, this joy was short-lived as he was replaced by Pradeep Kumar and the reason given was the ridiculous one that his teeth were in bad shape!