40 years of Namak Halaal: The soundtrack by Bappi Lahiri is the star of this Prakash Mehra entertainer

Prakash Mehra’s Namak Halaal (1982), an entertainer that is equal parts drama and comedy, deals with loyalties and hidden identities.

Shashi Kapoor’s Rajkumar is heir to a grand fortune of which Savitri (Waheeda Rehman) is a trustee. Her late husband Bhim Singh (Suresh Oberoi) was the dutiful employee of Rajkumar’s father Sanyal (Kamal Kapoor).

Both men were murdered by Sanyal’s stepbrother (Satyen Kappu) in an attempt to take over his fortune. Savitri dedicates herself to raising Rajkumar while abandoning her own child Arjun to his grandfather (Om Prakash).

Fate brings together both her sons as adults as Rajkumar’s cousin Ranjit tries to finish off what his father started. The multi-starrer, led by Amitabh Bachchan, became a platinum jubilee hit, aided largely by its fantastic soundtrack.

In the book Teen Sey Chhey: Rewinding Bollywood, author Bobby Ghatak wrote, "Namak Halaal vindicated Amitabh's charisma by casting a magical cloak over the audience, who were enthralled by watching a rather ordinary film. It turned a super hit only because every frame is ruled by a character called Arjun Singh; a simple waiter at a hotel by profession but extremely principled in character."

The naive Arjun Singh has the sweetest relationship with his grandfather who raised him single-handedly since he was a little boy.

Bachchan and Lahiri made their respective debuts in 1969, but Namak Halaal was the composer's first film with the actor, and also with filmmaker Mehra. He called the film "a milestone of his career" and added it is very hard to recreate a song like the iconic 'Pag Ghungroo Bandh'. 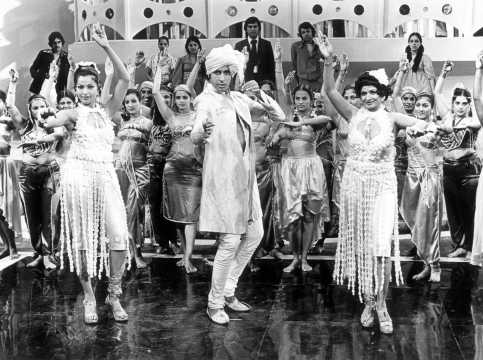 The number, which is the first song of the film, sees Bachchan's Arjun dressed in a sherwani and pink pagdi, showing off his comic chops.  From cleaning (and losing) his shoe in the moat surrounding the dance floor to taking over as the performer for the evening, Arjun makes quite a scene and impression, leading up to the dance number.

The lyrics by Anjaan and director Mehra starkly contrast the disco-inspired music and five-star hotel setting, but they work in the film's favour. This is also where he first spies a comely hotel employee (Patil) and falls in love.

The legendary Kishore Kumar, who was also Lahiri’s uncle, was said to be initially sceptical of the track and its long-winded lyrics and musical interludes. The singer won his fifth Filmfare award for Best Male Playback Singer for the number.

The 12-minute song was composed over three days in Mehboob Studios. Lahiri was keen to take the traditional qawwali in a modern direction and incorporate sargam into a track featuring Western instrumentation. 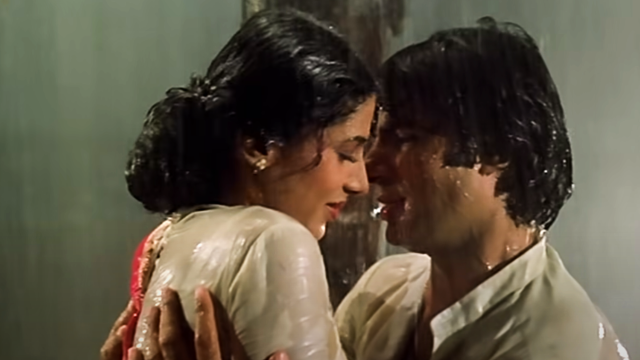 The composer only used Kishore Kumar, Asha Bhosle and himself for the vocals; and the rest of the numbers — the drunken comic track ‘Thodi Si Jo Pee Li Hai’, the melodic rain song ‘Aaj Rapat Jaye To Hamen Na Uthaiyo’, ‘Raat Baaki, Baat Baaki, Hona Hai Jo, Ho Jane Do’ set on a fake yacht, and the club track ‘Jawani Jaaneman’ also contain the Lahiri magic touch. The words to all the tunes were penned by Anjaan.

Every song on the album was a chartbuster, and Lahiri was nominated for Best Music Director, losing out eventually to RD Burman for Sanam Teri Kasam (1982). He eventually won the award for Sharaabi (1984), another Mehra production.

While Bachchan was a Mehra regular, both Patil and Babi were working with the director for the first time. The National award-winning actress acted in a few commercial features, and Namak Halaal was one of them. The actor later wrote on his blog that the actress was “so uncomfortable during the shooting of the entire film because she just could not understand why she was asked to do what she was asked to do in the film. But she did it with a lot of personal persuasions from me and it came out fine".

While the Kishore-Asha duet ‘Aaj Rapat Jaye To Hamen Na Uthaiyo’ establishes the romance between Poonam and Arjun, ‘Jawani Jaaneman’ sets up the femme fatale Nisha (Babi) with Bhosle's vocals. Nisha is tasked with finishing off Rajkumar but ends up falling for him herself. 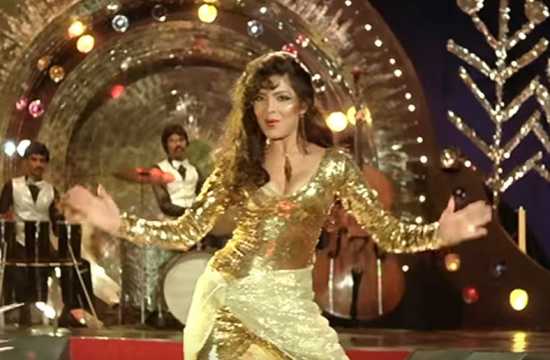 It's no coincidence that both numbers went to gain great popularity on the dance floor. In the electrifying 'Raat Baaki', Lahiri joined Bhosle, giving voice to Kapoor’s character towards the end. The song was later recreated by composer Tanishk Bagchi for the mystery thriller Ittefaq (2017).

The song ‘Thodi Si Jo Pee Li Hai’ is the most situational as it is designed to draw out Arjun’s grandfather who comes in disguise. But the five-song music album is undeniably Lahiri's, who was dubbed the King of Disco by both his peers and fans.

Mehra’s Namak Halaal had all the usual tropes of a masala Hindi film, but it was the music that elevated it into a tour de force.