I was destined for the life of an artiste, says Ankur Rathee


The actor speaks about his recent projects and how he approaches his work.

Since making his debut as Arjun in the first season of the Amazon Prime Video web-series Four More Shots Please in 2019, Ankur Rathee has risen steadily to become one of the familiar faces in the Indian digital space with roles in shows like Made In Heaven, City Of Dreams, Inside Edge and Eternally Confused And Eager for Love.

In the second season of SonyLIV’s Undekhi, which was premiered last month, Rathee’s character Daman Atwal has a larger presence. With his wife Teji (Anchal Singh), he uncovers a different side to his family.

Asked about his more active role this time around, the actor shared his thoughts on how Daman has grown as a character. “[He] maintains hope through the first season,” Rathee told Cinestaan.com on email. “He is naive enough to think he can escape his family. This season hopelessness sets in and he accepts that if you can’t beat 'em, join 'em.

“His family's criminal activities and wife's appetite for revenge have forced him to abandon the idea of living a completely 'pure' life,” he continued. “Instead, as a person, Daman has become more practical and realizes he must play the game, otherwise he will either be forgotten or stepped over. For these reasons, we start to see a more strategic Daman who plays his cards close to the chest, sometimes not even revealing them to his wife.” 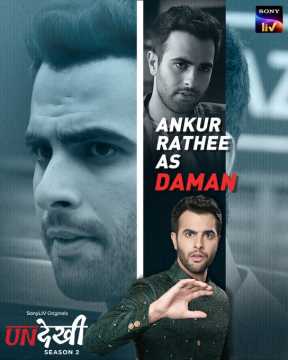 In the likelihood there is a third season, Rathee thinks Daman will make a play for the family business. “It’s more a question of how rather than when,” the young actor said. “No one has more claim to the throne than Daman, but will it be given willingly or will he have to snatch it for himself?"

Rathee, who divides his time between the US and India, said he knew he wanted to be an actor since childhood. “But somewhere along the way I grew fearful that it wasn’t a practical path,” he recalled. “It took me many years before I realized that practical or not, I was destined for the life of an [artiste].”

Once he committed to being an actor, there was no looking back. Thankfully, he has support through his sister Sonia Rathee and fiancée Anuja Joshi, who are also in the same profession.

“We learn so much from each other’s successes and failures,” he said. “We pick each other up when we are down and ground each other when we lose our way. Most importantly, we are a team. All for one and one for all!”

The only downside has been balancing his time between countries. The actor admitted his situation is “currently very imbalanced”.

With OTT platforms giving actors like him a boost, Rathee feels the freedom he has as an artiste depends on who is leading the project.

“The liberty you can take with your character depends more on your director than the medium of work,” he explained. “I have had the privilege of working on very collaborative sets for both films AND series.

“The explosion of OTT content has made it so that viewers can watch my work any time of the day, for hours on end,” he went on. “It has given my characters so much exposure and built a level of recognition in my career that I'm very grateful for. That said, my personal growth as an artiste is independent of the medium through which that work will be shown. I don't change the way I perform based on whether it's a film or an OTT. I play the character as it suits the vision of my director.”

Rathee also mentioned that another recent character is rather close to him. “Varun from Eternally Confused And Eager For Love isn’t exactly me, but there are definitely parts of him that make up my personality," he said. "He is the voice in my head that I sometimes have to tell to shut up.”

The actor, who is looking forward to playing the role of a historical figure in his future projects, also thinks he and actress Alia Bhatt would make good scene partners someday.

Rathee, who made his feature film debut with Tashkent Files (2019), is currently busy on a film project, shooting with Kriti Sanon and Kartik Aryan for Rohit Dhawan’s Shehzada (2022). The film is due to be released in theatres on 4 November.

Eternally Confused And Eager For Love