What I couldn’t do in Hindi films, I did in theatre, says Rohini Hattangadi


The veteran actress, who turns 67 today, looks back on her career choices and reveals how it felt to play mother to actors 10 years older to her.

Rohini Hattangadi in Jalsa
give your opinion

Shefali Shah once recalled in an interview that she played Akshay Kumar’s mother in Waqt: The Race Against Time (2005) when she is actually six years younger than the star. It's an experience Rohini Hattangadi is familiar with, having played mother to actors who are older to her by a decade and more. For example, she played Amitabh Bachchan’s mother in Shahenshah (1988) and Agneepath (1990) when the latter is 13 years older to her.

But Hattangadi tells Cinestaan.com in an exclusive interview that she didn’t have a problem doing those roles and simply took them up as work. Looking back on her film career of more than 40 years, it would be fair to say that Hattangadi has been one of those rare artistes who have been able to juggle commercial and the so-called parallel cinema.

As she turns 67 today (Hattangadi was born on 11 April 1955), she speaks candidly about her career choices, her approach and how an actor must adapt to films of different genre and forms. Excerpts:

You were recently seen in Jalsa (2022) with Vidya Balan and Shefali Shah. What impressed you about the film when you were offered the part?

Firstly, I liked the story. There are no good or bad characters. Every character has something good or bad in it. It was a realistic story. It happens that we react in one way in a situation and then regret it. This aspect is what I liked in the film. Though there is nothing much to do for my character, she is a pillar to lean upon in the family, especially for Vidya’s child. There is also a scene where she [Vidya] gets angry at the mother [Hattangadi's character]. It happens. So when I was offered the role, I liked it.

You have been working in movies for more than 40 years now. How has your journey been so far?

Right at the beginning of my career, I did Gandhi (1982). You may call it too early or timely; one doesn’t know. From there, I got noticed and came into Hindi cinema. Eventually I would have come, but I came quite early. But almost all my roles were mother roles. At the age of 30, I was playing mother to 40-year-olds! But I took it in my stride and felt it’s fine.

I had theatre to fall back upon. Else there would have been frustration. But I felt I can earn money this way and keep doing theatre in between. So I don’t regret it as such. What I couldn’t do in Hindi cinema, I did in theatre. So it wasn’t frustrating. I have even played mother to Amitabh Bachchan.

You played his mother in Agneepath and Shahenshah, though he is more than a decade older.

How did it feel? Does it feel unusual?

Well, you can say there was a vacant space then for the role of a mother. Nirupa Roy was no longer playing those roles. I think they fitted me in. So I just accepted it.

People always recall that Anupam Kher was much younger when he played the role of a senior citizen, BV Pradhan, in Mahesh Bhatt’s Saaransh (1984). But you, too, were much, much younger than your character in the film as his wife. What was the whole experience like, especially working with Kher?

Since Anupam is also from the National School of Drama, there was this brotherhood-type feeling while working with him. Earlier, I had seen one play of his in Delhi called Long Day’s Journey Into The Night, which was directed by Amal Allana. So I had known him at that time. And I had done Arth (1982) with Mahesh Bhatt. I knew Madan Jain, too, because we had done theatre together. And with Soni Razdan I had done Party (1984) before. I knew her as a theatre person also.

The experience on this film was very good because it was like we were all making the film together. It wasn’t like my film or your film. It was our film. When we used to get ready and come down to the sets, we never went to our respective rooms before pack-up. We used to be on the set to have a look at each other’s work. I used to be there even if I wasn’t needed at that time. We used to give our suggestions and opinions. Even Mahesh used to acknowledge that and take Rs5 for each suggestion (laughs). He collected so many rupees!

It was a start-to-finish film. We never did it in schedules. But it was like when I wasn’t needed in Nilu-bhau's [the late actor Nilu Phule's] scene, I wouldn't be there. We finished shooting in two months. It was very fast. I had to shoot for a film in Madras for four days in between.

You have worked in parallel cinema and at the same time done commercial films like Shahenshah, Chaal Baaz (1989), Agneepath and Damini (1993). What difference did you experience while shooting both types of films?

The very film suggests how it is going to be. It depends on the director also. So you have to adapt yourself and your style. I can’t do realistic kind of acting in a film in Madras. Like in Dharm Adhikari (1986), A Raghavendra Rao was the director. When I was doing the film, I used to act in my way. But he used to suggest, ‘Please cry a bit more.' (Laughs.) He used to ask me to do a bit more. Even he knew I was from this school [of acting naturally]. When schools are different, you have to adapt accordingly. Else your performance will look different from the rest of the cast. Then it won’t gel and the film will fall flat.

Even in Char Diwas Sasuche [a television show], the director used to ask me to be loud. So we have to play accordingly.

You played Sanjay Dutt’s mother in Munna Bhai M.B.B.S. (2003) and later you played the same role in the Tamil remake of the film Vasool Raja M.B.B.S. (2004), starring Kamal Haasan. How was the experience of playing the same character again but in a different language?

They had adapted the film in a different way. My scenes in this film weren’t the same [as in the original movie]. The person [Nagesh] who played my husband is a very big actor in Tamil. I had a lesser role than him. So I don’t know how it fitted everything. But the film did run well there too.

Your meme from Munna Bhai M.B.B.S. where you are asking Sanjay Dutt, ‘Tu doctor hai na?’ has gone viral. Have you seen it? Do you see memes on social media?

I have seen it (laughs). I feel if your memes start coming out, it means you are famous; or your film or TV serial is famous. 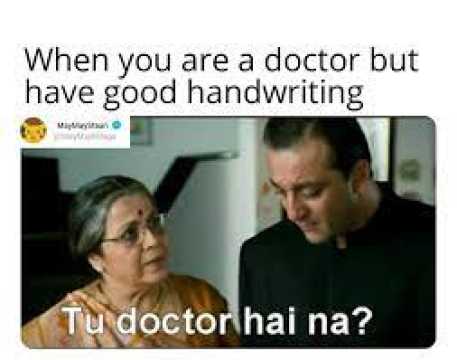 What do you generally look for in a project? What are your criteria for taking up a role? Have there been any changes over the years in this process?

I don’t have set criteria. Firstly, I need to be doing something substantial in the film. There should be meat in the role. Just playing a mother for a couple of days doesn’t interest me. That is the only criterion. There are times in parallel cinema where I have done a small role if someone has requested me to. In commercial cinema, sometimes money is the priority; sometimes it’s your work, it depends.

You are starring in Anant Mahadevan’s Aata Vel Zaali with Dilip Prabhavalkar. What other projects are lined up for you?

I have completed Kedar Shinde’s Marathi film Baipan Bhari Deva. I will be shooting a film, Comedy Ajji. It’s a family film about one person overcoming her fears and what she has experienced in life. And my Marathi TV serial Boss Majhi Ladachi is going on.

Not much. On this birthday, I am working. Normally, my family and one friend go out. That’s it. And on all my birthdays I try to donate something. I also do this for my son’s birthday and Jayadevji’s [her husband and theatre director Jayadev Hattangadi's] birth and death anniversaries.