We built genuine camaraderie after working together for two seasons of Gullak, says Geetanjali Kulkarni


Kulkarni speaks about her experience of working on the popular web-series and how this is the best period for actresses of her age.

Geetanjali Kulkarni, who has been part of critically acclaimed films like Court (2015), Mukti Bhawan (2017), Photograph (2019), Anandi Gopal (2019) and Sir (2020), is known for portraying serious characters, but she is seen in a very different avatar in the SonyLIV family comedy Gullak.

The web-series by TVF, which revolves around the daily struggles of the Mishra family residing in a small North Indian town, captures the essence of a typical Indian middle-class household.

Kulkarni, who plays homemaker Shanti Mishra, spoke candidly about the third season of the heartwarming show which is now being streamed on SonyLIV. Excerpts:

Gullak has become quite popular over the past two seasons and gained a cult following. How do you see the audience's response?

How was the experience of working on Gullak (Season 3)? By now the four of you must have become good friends.

As an actor, you feel very satisfied when shooting for Gullak because it's a collaborative process. It's a nice feeling to be a part of Gullak because we all have gone through the same kind of experiences in our lives as a middle-class family. You see your mother, uncle, aunt, brother, sister in those characters, so it takes you down memory lane.

We actors have built genuine camaraderie after working together for two seasons. It's not just about learning your lines by heart and thinking about your character; it's more than that. The give-and-take which happens between the actors, it happens quite naturally because we have all got used to each other's acting style. In the third season, we were so much in synch as actors that things became easier for all of us. Plus we all knew each and every person on the crew, because most of the crew worked on the first two seasons as well. 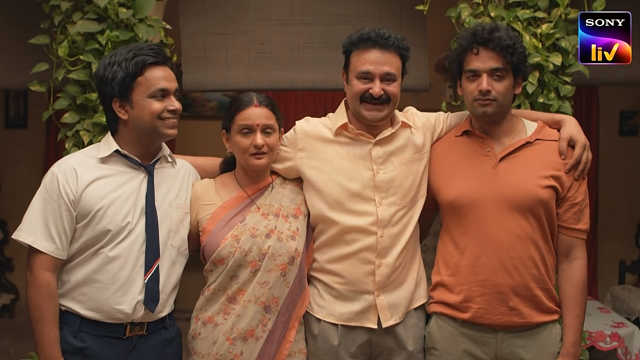 It's an episodic show, so it doesn't follow a traditional character arc. Was it difficult or easy to get into character with each new season?

Actually, it is difficult because in every season we are growing not just as characters, but as actors also. Like I'm growing as Geetanjali Kulkarni with every new experience in life, the same thing happens with Shanti Mishra. Durgesh and Shreyansh have written such situations where you can see the growth and maturity of the character without having to follow the traditional method of a character arc.

You can sense the character growth even in the banter between Santosh Mishra and Shanti Mishra. With each season their reason for banter and the way they banter changes, because they have changed as characters. Even the fights and love among the siblings has changed over the years. Shanti's relationship with her neighbour has got more layers in this season.

The characters are endearing and situations are relatable. Most Indians go through these kinds of situations in daily life. The challenge is that it shouldn't become boring; at the same time you have to be true to your character.

The first season was directed by Amit Raj Gupta while the second and third are directed by Palash Vaswani. Obviously, each director will have his own vision and style, so how do the artistes cope, especially when they have to play the same characters?

The whole TVF team collaborated [on the show]. It's not just one person's creation. So the writing team, direction team, producers, they were equally involved. Though Palash was in charge in the second season, he is from TVF, so he knew what had gone into the making of the first season. Our writer for the third season, Durgesh, had written the song for the first season. So it was not like a foreign person had arrived to direct the series. They were a team. All creators, writers, directors were like a team. And TVF people are very good at it. They collaborate, write and develop concepts together. So it is not a product of just one brain, it is a product of many brains. That's the beauty of the show.

What is the one thing you find most relatable about the show or your character?

When I started working on Gullak, it reminded me of those old serials we used to see on [public broadcaster] Doordarshan or the films of Basu Chatterji. The series reminded me of that kind of humour, but in a modern context. It doesn't try to use the nostalgia factor and focuses instead on contemporary issues.

If I have to talk about what I found most relatable, if you have seen the trailer, you know that the father Santosh Mishra is suspended because of office politics and there is some tension in the house. I remember my father had had an argument with his boss and quit his job. So the atmosphere in my house was tense at that time. During the shooting of this episode, I could remember what happens when the breadwinner of the family loses his job. And I think every middle-class household goes through such ups and downs.

You have been selective about your roles. When we go through your filmography, we see that the past three or four years have been the busiest period of your acting career.

I think this is the most exciting period of my acting career. Until now I was doing a lot of theatre. But I never expected that I would get such unique and different roles at this stage of my life and they would reach so many people. It was a surprise. Of course you always hope that your project reaches maximum people and gets the deserved appreciation, but most of the time it's not in your hands. It depends on so many other factors like what era you are in, what kind of stories people are eager to watch, finance, the availability of a medium to reach many people, all these play important roles. It is not just about whether I'm a good or a bad actress.

I think this period is really good for experienced actors like us, especially female actors. They are getting the best roles now. And it's not just about young heroines, even my contemporary female actors like Shefali Shah, Sheeba [Chhadha], Amruta Subhash are getting the best roles of their careers now. They have all done a lot of theatre and cinema and are finally getting deserved recognition. We are fortunate that we are getting meaty roles at this stage of our careers.

Are we going to see a fourth season of Gullak?

Yes, definitely. We are confident that people will love the third season of Gullak. Of course it is not in our hands now, but we are confident that people will relate to these stories. Discussions for Season 4 are going on and I think we will start shooting as soon as the writing is complete. We all actors and even the creators and our streaming platform are quite eager to make the fourth season.

Your husband Atul is a well-known actor. Do you discuss with each other before signing a new project. or is it a personal decision?

We don't discuss as such, but obviously when an interesting script comes my way I tell him that I have this story. He also shares the experiences he has had as an actor. And, of course, I give him feedback on his work and he does the same for me. Whatever exchanges a normal couple would have in such situations, we also have. We discuss a lot, fight a lot. Sometimes he agrees to something and sometimes we disagree. We talk to each other a lot. We have known each other for more than 25 years and are like best friends.