In an interview in 2016, the actor spoke in great depth about slipping into the skin of Mahendra Singh Dhoni.

Sushant Singh Rajput in MS Dhoni: The Untold Story
give your opinion

Filmmaker Neeraj Pandey is known for making edge-of-your-seat thrillers with a dash of nationalism. But with MS Dhoni: The Untold Story (2016), he took everyone by surprise by opting to make a film on India’s celebrated former cricket captain Mahendra Singh Dhoni.

The biopic, which looked back at the sportsman’s journey from his teenage years to the World Cup glory of 2011, was met with critical and commercial acclaim. It also earned accolades for the late Sushant Singh Rajput for his portrayal of the cricketer. It remains one of his best and most moving performances. The film also starred Anupam Kher, Kiara Advani and Disha Patani.

As the movie turns five today, we look back at an interaction Rajput had with the media, including Cinestaan, where he shed light on his preparations to play Dhoni on screen.

In an interview before the release of the film, Pandey had said that he couldn’t see anyone else except Rajput playing Dhoni on screen. When this was pointed out to Rajput, he jokingly replied, “He [Pandey] always speaks the truth.”

Interestingly, Pandey approached Rajput to play the lead despite not having seen any of his films. "He hadn’t seen any of my films," said the actor. "We met only for 20 minutes. In those 20 minutes, I don’t know what he saw that he was so convinced. It feels good when he says during film promotions that nobody else could have played the role. His intuition proved to be right."

It is a no-brainer that portraying Dhoni would be no walk in the park for any performer, and this is exactly why Rajput took up the role. "Such challenges create excitement. Few things you know, few things you don’t. You do something to know things you don’t know. This is what forces you to sleep 10 minutes late at night and wake up five minutes early," he said. 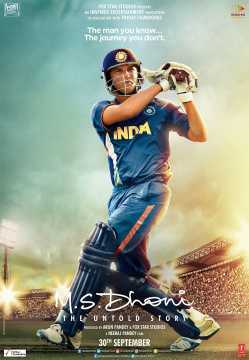 Rajput had to play one of the greatest cricketers of all time, but he hadn't even played for his school team. "My sister was a professional cricketer. But I was never able to play professionally and was never selected even in my school team. But here was a chance for me to play with the best kit and best coach for hours," he said.

Rajput was coached by the former Indian cricketer Kiran More for around 150 days. He not only had to bat well but also bat exactly like Dhoni, who had an unusual way of playing shots. A video shared by the producers showed how Rajput even mastered Dhoni’s trademark ‘helicopter shot’ by the end of the training session.

Speaking about the importance of aping Dhoni’s batting style, Rajput said, "You know well that I am not Dhoni. Still, you will spend money to watch the film. You will say, 'At least make me believe that this person is Dhoni; at least don’t shock me by messing it up'. The most important task for an actor is to convince people into believing that he is someone else."

Rajput was also required to play a wicket-keeper because that is what Dhoni’s primary job was. "I am 29 years old but I was trained as if I am 14. The body reacts differently at this age," he said. "And apart from batting, I also had to learn wicket-keeping. The ball travels to you in 0.6 seconds. I had a good coach like Kiran More. He had also trained Dhoni so he knows his style. Analysts from Ranji Trophy provided me with seven frames of one particular shot. I had to play that one shot 200-300 times daily for three days."

Rajput said that playing real-life characters who are still active in their respective fields was challenging. "While playing fictional characters, you [the audience] won’t be able to make out so we are safe. But in this case, Dhoni is popular. So it was necessary for me to match his way of playing, walking and other mannerisms. After few months, people used to tell me that I have some similarities with Dhoni. So I realised I was on the right track. There was no similarity before (laughs),” he said.

But that’s not all. The task also involved speaking like Dhoni. “For the first 2-4 months, I only used to watch Dhoni’s videos. I saw 700-1,000 interviews of his again and again,” added Rajput.

When he was asked who was his favourite cricketer, Rajput instantly said, “Till my 10th standard, it was Sachin Tendulkar. After returning from school, the first question I used to ask was whether Sachin was still playing; I didn’t ask whether India was winning.”

It was later during his college days that he got introduced to the magic of Dhoni and there was no looking back. "During my first year in college in 2005, I skipped my mid-semester exams to watch an India-Pakistan match at a snooker joint," he said. "I saw Dhoni with long hair and he scored 140 runs [148 at Visakhapatnam]. It seemed as if he knew from the beginning that he will be scoring 140. From that moment, till today I am his big admirer. I also got a chance to click a picture with him in 2006. I had faced a lot of difficulties then."