On the film’s 58th anniversary today, during its maker's centenary year, we revisit Ray's first feature set in Kolkata, which feels just as relevant today as it did at its release.

Mahanagar (The Big City), which was released on 27 September 1963, was adapted from Narendranath Mitra’s short stories Abataranika and Akinchan. It was the first Satyajit Ray film set in Kolkata, although in the previous decade, allowing the city to become an essential part of the story and of the journey that the lead characters go through.

The film is arguably Ray’s most contemporary, dealing with the evolving social and economic problems of the period through the eyes of a typical middle-class Bengali family, the Mazumdars.

Subrata (Anil Chatterjee) begins Mahanagar as the sole breadwinner, shouldering the responsibility of his elderly parents, his school-going sister Bani (Jaya Bachchan, then Bhaduri, in her screen debut), his wife Arati (Madhabi Mukherjee) and their young son Pintu.

With the family cramped in its small home, and high monthly expenses, the couple even discuss the possibility of Arati finding a job. They scour the newspaper’s wanted ads, finding one suitable, looking for salesgirls for a knitting machine. Somehow, the unqualified Arati is selected, and Subrata must break the news to his orthodox schoolteacher father (Haren Chatterjee), who believes a woman’s place is in the home.

It causes a ‘cold war’ between father and son, but Arati must work to ease the financial burden, and she heads out to work, even as Pintu protests. In a new environment, the shy, hesitant Arati finds her groove, making friends with the other salesgirls, especially her self-assured Anglo-Indian colleague Edith (Vicky Redwood), who introduces her to modern accessories like sunglasses and lipstick.

When her husband discovers these subtle changes in his wife, Subrata begins to see her with new eyes. Quite possibly, he never thought the job would bring about a change in her demeanour as she buys gifts for the household with her first payment.

Ray highlights this abrupt change in Subrata, whose quiet feelings of resentment grow, especially when he loses his job and has to plead with Arati not to quit hers. As the film progresses, Arati finds her own voice, against her boss, Mr Mukherji (Haradhan Bannerjee) as she protests against the unjust firing of Edith and hands in her papers. And later as she confides in Subrata about her outburst, but this time, Subrata lends support and comforts her that there will be something out there for both of them. 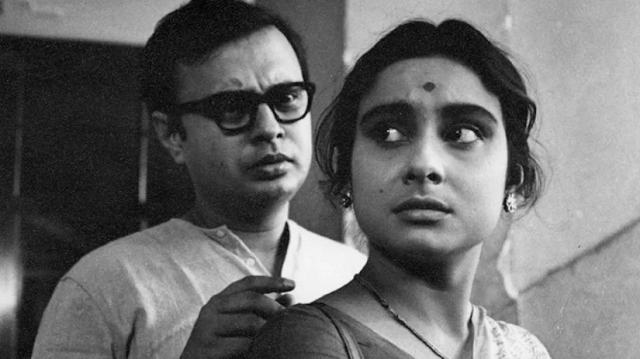 Amitava Nag, author of Satyajit Ray’s Heroes & Heroines, states, ‘In this directorial gaze, Ray also brought out, for almost the first time, a woman character who is confident in determining the course of her life even within the boundaries of a patriarchal society.’

It was the first time that actress Madhabi Mukherjee worked with Ray, while Chatterjee was an old hand, having worked with the director in Devi (1960), Teen Kanya (1961) and Kanchenjungha (1962). Mukherjee, of course, went on to work with the auteur in Charulata (1964) and Kapurush (1965).

Madhabi Mukherjee explains why Charulata is a crown, not a burden

Mahanagar is a tour de force precisely because of Mukherjee's performance, which rings true even today. Madhuja Mukherjee, filmmaker and professor of film studies at Jadavpur University, said in a telephone conversation that her performances in many films from that time period speak to one another. She cited Ritwik Ghatak's Subarnarekha (1965) in particular but said this could be seen in mainstream Bengali films as well, especially with her facial expressions.

“It is very much her performance and her consistency, like a craft that you can see, which is extremely meaningful," Prof Mukherjee said. "It is really poignant and remarkable.”

Nag further notes that 'in most cases, the camera focuses on her face far more than either of her male counterparts or the female characters of the previous Ray films'.

Mukherjee's eyes and her expressions give away her character’s inner turmoil. Case in point, Mahanagar’s key mirror scenes set in the office toilet, where Arati gazes at herself, first with her first earnings, later fortifying herself with lipstick before she goes in to ask for a raise.

In The Cinema of Satyajit Ray, renowned film critic Chidananda Das Gupta said of her, ‘As the traditional middle-class housewife finding a new worth in herself, Madhabi Mukherjee is the perfect embodiment of the woman torn between self-abnegation and self-respect. Even her looks are of the housewife lost in her chores who has, secretly in her somewhere, all the enticing mystery of woman. The possibility is indicated here, where Madhabi strikes the perfect note of hesitant emergence from behind the curtains of tradition.’

Nearly six decades after its release, not much has changed. In fact, things have got worse for women. According to Reuters, 'A report by the Centre for Sustainable Employment at Azim Premji University found that 47% of women workers who lost their jobs between March and December [2020] — before the second wave of the virus hit in April — were made permanently redundant.'

The coronavirus pandemic had already made it harder for women to balance family, home and work; the social and economic setbacks they faced during this period could take years to undo.

On the film's 50th anniversary, Madhabi Mukherjee had told The Indian Express newspaper, "Arati is the woman that you can see in every household of Bengal. Not only Bengal, she is in every house of India. It's been five decades that the film saw the light of the day, but I would say nothing has really changed in our country. The plight of women and the way a middle-class family functions, we are still frozen in time. She is the embodiment of every Indian woman."

Prof Mukherjee added that the masculinity in Mahanagar is precise and works at multiple levels. “It’s kind of very subtle and it may not even register with you at the first go," she said. "I would like to emphasize that it persists and in that regard [the film is] very relevant.”

But Mahanagar is also meaningful in how Arati’s journey is explored. Even today, Prof Mukherjee can find students from poorer backgrounds who are the first generation in their family to go out to college and the work space, both in the urban and suburban sectors.

Both Arati and Edith fight for equality in pay and fairness at their jobs, issues that women still have to fight today. Modernity and technology have brought about much change in India, but the patriarchal mindset persists.