5 years of Pink (2016): How the tense court scenes were constructed


Originally, the ending of the drama wasn't going to go in favour of the young women. It was on the day of the shooting that producer Shoojit Sircar agreed to make it positive.

Since its release in 2016, the drama Pink has been remade in Tamil and Telugu, headlined by stars Ajith and Pawan Kalyan, respectively. The film marked Bengali director Aniruddha Roy Chowdhury's debut in Hindi cinema.

Starring Amitabh Bachchan with a young cast that included Taapsee Pannu, Kirti Kulhari, Andrea Tariang, Angad Bedi and Vijay Varma, Pink was focused on the issue of a woman's consent in a case of sexual assault and its aftermath, when the victims are put on the stand and grilled for their actions.

The characters of Pannu, Kulhari and Tariang are roommates who meet up with rich kid Rajvir (Bedi) and his friends at a party one night. Rajvir tries to force himself on Minal (Pannu), who retaliates by breaking a bottle on his head.

Hurt and humiliated, Rajvir and his cronies decide to make the women’s lives miserable, even going to the extent of getting Minal arrested for solicitation and attempt to murder. Rajvir, who has the money and connections to back him up, put the young women in a tight spot, until they get retired lawyer Deepak Sehgal (Bachchan) to fight their case.

The film’s story was developed by Roy Chowdhury and producer Shoojit Sircar, while the screenplay and dialogues were penned by Ritesh Shah. What made Pink stand out in the crowd were the tense courtroom scenes where the friends and the alleged assailants tell their sides of the tale.

Rajvir and his friends keep harassing the women, to the extent that Falak (Kulhari) even loses her job. Once Sehgal sees what they are doing to Minal and her friends, he decides to step up to the plate with his unconventional methods.

Once the case moves to the court, we see how Sehgal plans to counter the probing questions of the prosecutor (Piyush Mishra) by directly questioning his client himself. In the book Pink: The Inside Story, author Gautam Chintamani revealed how this reverse interrogation came to be.

Initially, before the shooting began and a part of the screenplay was still in production, Sircar and Shah were trying to figure out the tone of the court scenes. In rehearsals, Sircar played the advocate grilling Pannu’s character and got the actress to react to some of the questions they had come across in actual trials during their research.

'Some questions were totally unrelated to the film,' Chintamani wrote. 'The sessions were recorded and, to his surprise, Sircar found that many unexpected things emerged from this interrogation. The film’s unconventional dialogue, where Deepak Sehgal apologetically quizzes Minal, his own client, about her virginity was one of the breakthroughs of this exercise.'

He continued, 'Looking at the way Pannu squirmed at the questions, Shah discovered that her reaction had more to do with the fact that the question came from someone supposedly on her side. The idea was for Sehgal to drive home the point that it was Minal’s body and her consent was paramount.'

Once the shooting of the court scenes began, the makers went in for a multiple-camera set-up, using from four to eight cameras, covering all the action and the players in the scene. Since the cast and crew had gone through intense rehearsals beforehand, many of the sequences were okayed in one take.

Book excerpt: How the dialogue ‘No means no’ from Pink took shape

Finally, the film’s iconic line, “No means no”, almost didn’t make it in. The veteran Bachchan didn’t think his character needed to make a long speech in his closing statement; he thought the word ‘No’ would be enough. 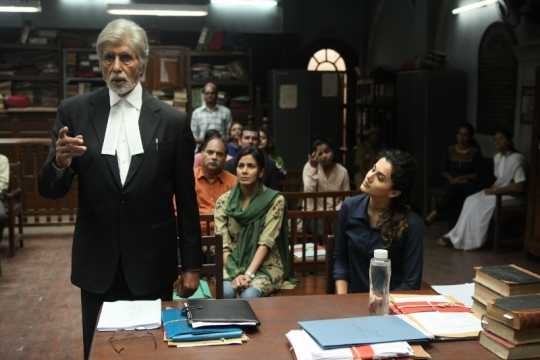 It was writer Ritesh Shah who wanted to try something and gave the additional lines during filming.

Chintamani stated in his book, 'Roy Chowdhury credits him for breaking down the concept of consent to its simplest form for the benefit of male viewers, most of whom, unfortunately, do not comprehend it. Some critics and commentators would later question the way in which the film addressed consent, but Roy Chowdhury remembers how some of his friends’ children, specifically boys, called him up to say they learnt something.'

The book also noted that originally, the ending wasn’t going to go in favour of the women. It was going to be a victory for Rajvir. However, producer Sircar wondered if the film’s impact would be lessened if the culprit got away.

Sircar 'felt that Pink, with its realistic ending, would be a strong indictment of everything that was wrong in our society’s response to violence against women, in keeping with the real-life instances where women are forced into leading a silent, often stigmatized, life after pursuing legal action. At the same time, the visual depiction of three women standing by each other no matter what would also make a strong impression'.

The ending came to be changed on the day of the shooting with Sircar giving Shah his nod to make it more optimistic. The makers decided to go with a more positive message to the audience, and the gamble paid off.