35 years of Nagina: The film that took Sridevi to the No 1 spot


The Harmesh Malhotra feature, which was released on 28 November 1986, gave the actress an opportunity to lead a Hindi film for the first time.

Nagina (1986), starring Sridevi, Rishi Kapoor, Amrish Puri and Prem Chopra, arrived at the right time for the actress. The Harmesh Malhotra feature, which was released on 28 November that year, gave the actress an opportunity to lead a Hindi film for the first time. Sridevi had been introduced to Hindi audiences with Solva Sawan (1979) but it wasn't until Himmatwala (1983) that she became a household name and began to challenge the established actresses.

Malhotra had initially offered the film to Sridevi's perennial rival Jaya Prada, with whom she had often co-starred, but the latter turned it down. Though Sridevi was down with a high fever at the time, she knew the script was strong and she had to do it.

The actress’s biography, Sridevi: The Eternal Screen Goddess by Satyarth Nayak, stated: Perhaps this was the opportunity she was waiting for, the chance to prove that she could carry a film solo. In an interaction with Raj Chengappa in 1987, Rajeshwari concurred: ‘It was her first real heroine-oriented Hindi film and I knew she would play it superbly. So, I cancelled some other dance and fight movies and told her to concentrate on Nagina.’ 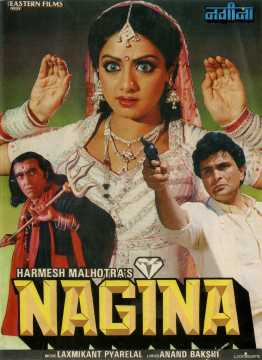 The previous year, in 1986, Sridevi had told Cine Blitz magazine, that she often got nightmares of ghosts, phantoms and snakes. “People tell me that dreaming of snakes means that you have a lot of enemies,” she had said then. Despite this she went on to play the part of the vengeful ichhadhari (shapeshifting) snake who is transformed into the human Rajni.

Rajiv (Rishi Kapoor) is besotted with her and marries her though his mother (Sushma Seth) wishes he marry someone else. Their union is uneventful until the greedy Bhaironath (Puri) enters their lives. The tantrik has the full trust of Rajiv’s mother and when she glimpses her daughter-in-law’s other form, she is horrified and asks Bhaironath to deal with her.

All these years later, the story by Jagmohan Kapoor and the screenplay by Ravi Kapoor are still compelling, though the visuals and acting feel highly melodramatic. Sridevi as Rajni stands apart in this, her motives noble, her intentions clear. She is matched by Puri, who is absolutely intense as the tantrik Bhaironath.

Both are clear about their agendas — Bhaironath wants to expose Rajni and get the mani (jewel) which her kind are said to possess, while Rajni is determined to protect her husband at all costs. The two have several showdowns in the film, especially the song ‘Main Teri Dushman’ in which he finally lures her in the open with the iconic been tune.

Besides the sequences involving Sridevi shapeshifting into a snake, the music in Nagina is spellbinding as Laxmikant-Pyarelal added yet another winning soundtrack to their collection. The Lata Mangeshkar number is still remembered today as the ultimate nagin dance number.

Sridevi told Filmfare magazine in 1992 how challenging this dance choreographed by the legendary Saroj Khan was. “I had to convey the feeling that I was helpless, that I was imprisoned by the strains of the music,” she said. “To do this without speaking a single line of dialogue was a challenge. So, I just went along with the music and let my body do the talking.”

To give the illusion that the actress was undergoing a transformation, she wore light-coloured contact lenses, which gave her the eerie look of glancing through a person. Saroj Khan also gave Sridevi the now-famous serpentine steps which made her move fluidly and with purpose. 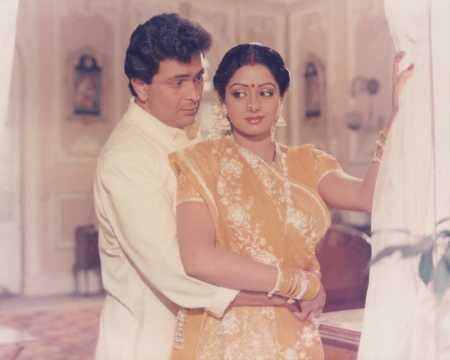 In his biography Khullam Khulla, co-star Rishi Kapoor revealed an embarrassing moment that occurred on the sets of the film at the now defunct RK Studios. He recalled, ‘When you are in the midst of a ‘take’ and the assistant cameraman suddenly says the magazine has run out (when the camera needs a new roll of film), it’s a very awkward moment for actors. The lights are on, you are in position, and you have to hold it, looking odd and static, while new film is loaded. During Nagina, Sridevi and I found ourselves in that awkward situation, just standing there, waiting, when she suddenly spoke to me and said, "Sir, I have seen Khel Khel Mein four times." I was so taken aback, I could only mumble something about a film of hers that I had seen, and that was it.’

According to the actor, it was the only time they spoke to each other during filming, apart from their dialogues and daily ‘hello’ and ‘goodnight’.

Nagina went on to become the biggest hit of the year and, according to Nayak, the film’s return on investment overtook even Subhash Ghai’s Karma (1986), which also featured Sridevi. The industry had to acknowledge that she was now the top actress in Hindi cinema.

Nayak wrote: So massive was the reaction that Malhotra immediately announced a sequel. This was unheard of in those days when even [Amitabh] Bachchan’s directors hardly dared to show such confidence in their hero. The sequel, titled Nigahen (1989), made Sridevi the second Bollywood actress after Fearless Nadia to have her very own film franchise. Nagina also spawned instant me-too films such as Rekha’s Sheshnaag (1990) and Meenakshi Seshadri’s Nache Nagin Gali Gali (1989), but none could hold a candle to Sridevi’s act.

Sridevi – The death of India’s most cherished gay icon

Malhotra’s Nagina also made an unexpected connection — many members of the LGBTQ community began to identify with the actress and her strong female performances that took on the patriarchy.

Activist Dhrubo Jyoti wrote in the Hindustan Times newspaper after the actress’s untimely death in February 2018, “When our homes were prisons and our families chains, Sridevi set us free. Her songs gave us fleeting glimpses of how the world would be if we could dance like we wanted to and wear the clothes our hearts desired. In her often garish, kitschy performances, we saw the promise of a future where we wouldn’t lie about who we were and what we liked.”

Sridevi followed up Nagina with more blockbusters like Mr India (1987), Chandni (1989) and Chaal Baaz (1989). Nigahen, which featured her as Rajiv and Rajni’s daughter Neelam, also starred Sunny Deol, but couldn’t match the success of the original.