He worked like a newcomer, says Shubham Singh on directing Prakash Jha


The filmmaker opens up about his award-winning film Highway Nights, which will be released in theatres in Los Angeles in December.

Shubham Singh’s short film Highway Nights, starring veteran filmmaker and actor Prakash Jha alongside Mazel Vyas, unfolds over a night and revolves around the unusual relationship that develops between the overworked truck driver and a young chatty sex worker. The film exposes the brutal reality of the exploitation of prostitutes and the inhuman way in which society regards them.

The director spoke to Cinestaan about the genesis of the film, saying, “We often travel on highways and stop at dhabas for food. The highways are dark, and on the outskirts, I saw that prostitution is rampant and girls look for customers there. Mostly, I saw that they were ill-treated and men even bargain for Rs200 with them. But there was one incident, which inspired this story, involving a man who was perhaps a truck driver. He asked one girl [a streetwalker] if she was hungry and she said yes. He got her food and after eating she just walked away without even looking back because she was doing all this hard work only for her meals. This was the sole reason why she was engaged in prostitution.”

He added, “There is a village in Madhya Pradesh where only women and girls go to work. They run their households through prostitution. This is the dark side of our country but I have taken out this positive incident [in the film]. Although everyone is not like the truck driver [in the film], they need to be.”

Highway Nights is a stark portrait of the inhuman way in which sex workers are treated and it highlights their vulnerability. “There are very few people who even treat them as humans. I wanted to bring forth the fact that they too have a life and aspirations,” said Singh, adding, “People look at this profession as being a very demeaning one. I just feel that why do we debase women engaged in this profession? We should treat them as humans.” 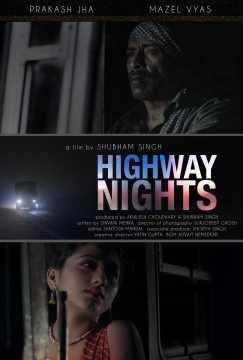 The choice of having Prakash Jha playing an overworked truck driver was an organic one. “When I completed the story, the first thought in my mind was that it is a good story for Prakash Sir. I had also watched Saand ki Aankh (2019), where he played a raw Haryanvi character, so I thought that he would fit the character [in Highway Nights] well. I narrated the story to him and he immediately liked it a lot. He too felt that more than the story, the purpose of the story is more interesting and should come into focus.”

Jha’s character in the film is largely that of a quiet observer whose humanity does not allow him to abandon the sex worker. One would think that directing a veteran filmmaker like Jha would be a daunting task but Singh was pleasantly surprised that it was not so. "I enjoyed his full support during the shoot and I never felt that I was working with such a senior director and actor. He worked like a newcomer and this was the first shoot in his life where he shot at night! Our entire sequence unfolded at night so we worked through the night. Not once did say that we were shooting late etc. We would not have been able to shoot it so well if we did not enjoy Sir’s [Jha] support.”

Working with Jha was a long-cherished desire that ended up unfolding in an unexpected way through the short film, “When I came to Mumbai, I had a great desire to assist Sir [Jha] but for various reasons that did not happen. I got the opportunity to direct him but I was nervous as Sir is first a director and then an actor and my experience pales in comparison with his vast experience. Although I was a bit nervous, Sir made me so comfortable and gave me complete freedom. He was calling me 'Sir' on the set and he enabled me to get over my hesitation to say anything to him while directing him. On the set he worked as an actor and me as a director,” said Singh.

The response to the short film has been an encouraging one for Singh. The film was awarded the Grand Jury Prize at the Best of India Short Film Festival 2021 and is eligible to qualify for the Academy Awards. “Our story was not for a mass-oriented film, so we did not expect it to get such a tremendous response, so much so that we have qualified for the Oscars and to be honest, we did not have all this in mind while making the film,” he said.

Highway Nights will be released in theatres in Los Angeles in December this year.