As the heist film completes a decade and a half, we look back at how the Yash Raj Films honcho brought the action franchise into being.

Yash Raj Films (YRF) broke new ground with Sanjay Gadhvi’s action-comedy Dhoom (2004). Starring Abhishek Bachchan, John Abraham and Uday Chopra, the film, which revolves around cops and a motorbike gang, was a rage among the youth and so was its mean machines.

Two years later, on 24 November 2006, Dhoom became one of the rare Hindi films at the beginning of the millennium to have a sequel.

There was a lot of anticipation for Dhoom 2, which turns 15 today, as the fledgling franchise had already become a familiar brand, and more importantly, because the sequel saw the inclusion of heart-throb Hrithik Roshan as a new thief as well as Aishwarya Rai Bachchan and Bipasha Basu. Abhishek and Uday reprised their respective roles as assistant commissioner of police [ACP] Jai Dixit and his associate Ali. 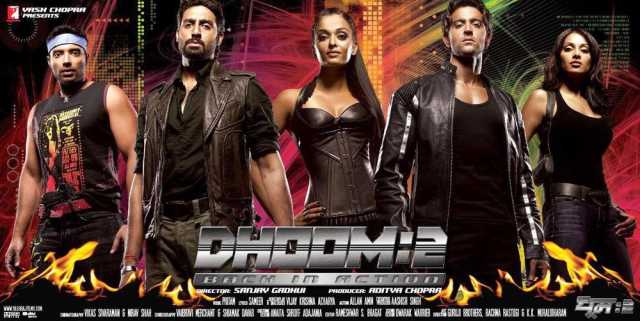 Although Dhoom 2 was also about a robber who is pursued by the two good guys, it was much bigger than the first film in terms of the heists and chase sequences. It also took the franchise to the international level as the story later moved to Brazil.

10 reasons why Dhoom 2 is the best in the trilogy

Vijay Krishna Acharya made his debut as a screenplay and dialogue writer with Dhoom and stayed on for Dhoom 2, which was also directed by Gadhvi. He later went on to write and direct Dhoom 3 (2013).

But it was YRF’s head honcho and filmmaker Aditya Chopra who had come up with the idea of Dhoom. He was also the first one to see that the film had the potential to turn into a franchise.

Acharya revealed this to Cinestaan in a conversation. “To tell you the truth, he saw the potential of a sequel much before any of us did,” he said. “Within the first week of the release of the movie, Adi was sure that we should make a sequel. Actually, he was sure before the release of the film but he said he just needed to see how it does till the first Tuesday.”

Although Dhoom 2 was released in 2006, its makers had started working on it in 2004. “We started work on Dhoom 2 quite soon after that. At least, the first jam session started quite early,” said Acharya.

However, Acharya added that Aditya Chopra always believes that one shouldn’t make a sequel just for the heck of it. Acharya considers that the “golden rule” for any sequel. “He said if we don’t find a story, we should never make it as a [next] Dhoom movie. He said, 'Don’t make a film only because it can be an enterprise or it can feed the franchise'. For Dhoom 2, until we found the story, we never thought that we were going to make the film,” he said.

Recalling how Aditya Chopra thought about the very birth of the franchise with the first Dhoom film, Acharya added, “What he [Chopra] had [in mind] was that there is a cop and there are these robbers who are robbing in new ways. We didn’t have more than that, but what we knew was that we needed some energy and bikes. To that extent, he foresaw something which none of us in the room had.”

Interestingly, the team kept the screenplays of the iconic filmmaker Manmohan Desai's films in mind while writing films of this franchise. “By that, I don’t mean in its fantasy,” said Acharya. “If you look at Manmohan Desai’s screenplays, they are always moving. Something keeps asking for your attention. Either it’s an action sequence, a song, a dramatic scene or a love story.”

Acharya added that although the who team deserves credit for the Dhoom franchise, it was Aditya Chopra’s brave decision of coming up with the idea of the first film that made it possible. “I think what Adi at that time took was an extremely brave and unconventional step,” he said.

Sharing an interesting experience before the release of Dhoom, Acharya said, “When the film came out, nobody could think it was a Yash Raj Film project. I saw the trailer at Fun Republic [a multiplex in Andheri, Mumbai]. A few college students were sitting two rows behind me. One of them said, 'We should see this film'. It spoke to a younger audience. It was a different audience from what we understand as the traditional YRF audience.”