Tryst With Destiny character is unlike anything I have played before: Palomi Ghosh


The actress speaks about her latest role in the SonyLIV web-series and also discusses how OTT platforms are changing content.

Palomi Ghosh has had back-to-back OTT releases in the past three months. In September, she appeared in Saket Chaudhary’s segment in the anthology Ankahi Kahaniya (2021) on Netflix. This month, she is seen opposite Jaideep Ahlawat in Prashant Nair’s Tryst With Destiny (2021), out now on SonyLIV.

In the film-turned-anthology series, Ghosh is Laxmi, Kuber’s girlfriend, who begins to re-examine their long-time relationship when she sees it stagnating. Over a telephone conversation, the National award-winning actress and performer spoke about her role in Tryst With Destiny, balancing singing and acting, and being named a BAFTA [British Academy of Film and Television Arts] Breakthrough artiste.

Calling Laxmi a unique character in her filmography, Ghosh said, “She is unlike anything I have ever played before [because] she comes from a very different socio-economic background. Even her psychology, just as a person, she has got some ideas that are unique to her. She sees herself in a certain image, but that is not who she is.

“[Laxmi] is trying to bridge the gap between her socio-economic background and someone who comes from a better strata of society,” the actress added. “She has always tried to do that through men. She has been with Kuber for some time now and she is realizing that she needs to have a certain kind of life, so it’s about her insecurities and how they play out and how they influence Kuber and his decisions in life.”

Ghosh went on to say that while Laxmi really does love Kuber, she is torn by her constant desire to have a certain kind of life. She shared her scenes with Ahlawat on the project and said it was awe-inspiring to work with such a phenomenal actor.

“It’s so fulfilling to have an actor like him to work with because, at the end of the day, it’s just about give and take, so when there is that synergy between actors, it’s pretty much a good day, every day," she said. "Oftentimes, agar nahin hota hai, then you have to compensate in some way, but when it’s the right fit, it’s magical, so I really lucked out that I got to play with Jaideep, because he is one of the best.”

Tryst With Destiny, written and directed by Nair, tells the story of four different characters and how they fit into modern India. It was screened at the Tribeca Festival last year and won the Best Screenplay award. Ghosh said she was thrilled when Nair and the agency Casting Bay chose her for this out-of-the-box story.

“The stories talk about four different things that India is faced with right now," she said. "The title of the film is Tryst With Destiny, which is also the speech that [the first prime minister Jawaharlal] Nehru made. The speech that talks about how as a country we must unite, and the fact that now as a film we are using the same title to talk about how we have reached a place of disparity, it was very interesting to me.”

Speaking about her digital projects, Ghosh said the arrival of OTT platforms had been a blessing, in that they have provided wider scope of work for everyone from the film industry — the artistes, directors, technicians. “It’s overwhelming, the amount of things there are to watch, but at the same time I’m grateful because it has created so many opportunities,” she said. 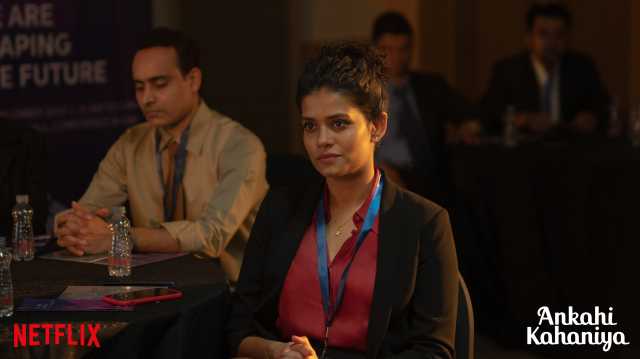 “Now you are not just being viewed by people in your country, you are also being viewed worldwide,” she continued. “Your standards have to up accordingly. That, I think, is beneficial in a lot of ways. If you notice, there is very little melodrama now, because we are trying to be at par with the rest of the world. Even our ways of creating have changed. Content is changing. But I think it’s a good time.”

The actress, who was named among 10 BAFTA Breakthrough artistes from India, also spoke about how the selection had given her a platform to make connections across the world.

“There is a lot of joy in just connecting with people from our field of work across the world,” she explained. “There is so much you can learn from just having a conversation with people. It’s really providing a platform to make these wonderful connections which otherwise would be hard to come through. I’m proud to be in the programme.”

Ghosh, who is quite adept with Indian languages, speaks Bengali and fluent Gujarati as well. That helps her navigate through different projects like the National award-winning Konkani film Nachom-ia Kumpasar (2015).

“When you speak two or three languages, then you will just find words that connect," she said. "So then you can just sew them together. Also it helped me because it was a musical toh gaane yaad rakhna is easier. Rhyme form is easier to remember. But I’m very excited about doing things in other languages.”

The actress and singer said she tries to do it all. “There is space for everything,” she said. “It’s interesting to do multiple things for me. Singing, acting toh hai, I love doing voice work also, I do all kinds of things and I love it.”

Ghosh was part of the Monsoon Wedding musical when it opened at the Berkeley Repertory Theatre in 2017. The musical is expected to come to India some time in the future.

She recalled, “Mira Nair was one of my dream directors to work with. [She] saw my Konkani film in New York and that is how I got on board with the project. Beautifully, one thing led to the other.”

Interestingly, the actress plays a character in the stage adaptation that was not present in the 2001 film. “Dubey, the wedding planner, had a grandmother whom you barely saw. I think you only heard the voice,” she said. “So now the nani [maternal grandmother] became a full-fledged character, almost like a narrator of the love story. I had a full song for that; it was a whole fleshed-out part. I played an 86-year-old nani in a big fat suit and I was also understudying the lead!”