A role no actor would give away: Pavan Malhotra reveals the allure of Tabbar


The actor's performance as the ruthlessly efficient but broken head of a family in Ajitpal Singh's web-series was among the outstanding performances of the year.

There are some actors who are easy and exude calm in conversation. Pavan Malhotra must rank among them. The actor has been in and around the film industry since the early 1980s. He eventually broke through as the angry Salim Langda in 1989. From Saeed Akhtar Mirza's film and the late Buddhadeb Dasgupta's Bagh Bahadur (1989) down to commercial entertainers like Don (2006) and Judwaa 2 (2017), the actor has constantly shifted gears to suit the role.

With the arrival of the digital medium, Malhotra's adaptation to changing times has been just as seamless. His second web-series, Tabbar (2021), was premiered on SonyLIV on 15 October. Directed by Ajitpal Singh, the web-series witnesses Malhotra with a talented cast led by Supriya Pathak and Ranvir Shorey.

"The screenplay holds you," the veteran told Cinestaan.com. "Then it makes you curious about the character's next move. For me, to play this character, we are talking about family matters. He is the head of this family. When you watch it, you know he is trying to keep everything together. No actor would leave this kind of a role."

Malhotra's Omkar Singh is a man who knows the limit, range and nature of law enforcement. So when it comes to committing a crime to protect his family, he approaches it with the cold calculation of a detective and the ruthlessness of a hitman, leaving the audience conflicted about his morality.

Malhotra explained, "He is committing a crime, but from one point of view, maybe he is not. He accepts it. It is his need. If he won't do that, then the situation will escalate. He commits one crime, thinking it would be his last. Then something else in the situation changes, forcing his hand." 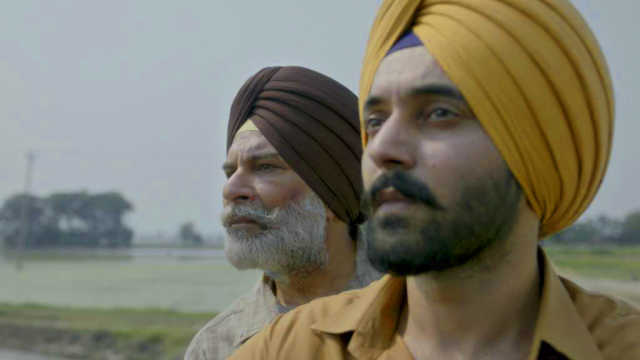 Despite the morally incongruous nature of the story and the high tension involved, the actor seemed at ease in his role. Joking around with co-stars Pathak and Shorey during the press interactions, he seemed to be in good spirits. An essential part, he said, for any project to come good.

"It always helps to coordinate better when shooting," Malhotra said. "It is not necessarily planned. Although I am a talkative person. I tend to speak with the light boys, assistants, everyone on set. I have to be happy and I feel like this is a family. Everyone should enjoy being there. Just like a family, some are overworked, some have fun, some are made to run around. In the end, every brick in the wall is important."

He should know. He began 2021 with the web-series Grahan and has followed it up with another good performance in Tabbar.

Having been on television (Nukkad, 1986), the big screen and now the digital medium, a question about his experience in this new zone was inevitable.

Malhotra shrugged and said, "Actors work for the camera. What I have shot here could be run in theatres just the same. Yes, it offers a platform for actors, technicians, writers to explore more. The eight or nine episodes you are shooting are [equivalent to] three films almost. You have the liberty to speak in detail on one subject."

Yet, the actor pointed out, this medium, like any other, has its teething troubles. Pointing to the generous and often gratuitous use of sex and violence in stories, he said, "Since there is no censorship, there was sex, violence, etc. These were teething problems. They were trying too hard to sell the platforms."

Comparing it to the overindulgence in musicals in the late 1980s and early 1990s, he said, "For us, music is a part of our cinematic culture. There was a time people would go to the movies only for the songs. Songs could make a film successful at the box office. Soon, it became a territory. Slowly, songs were pushed into films for this territory. Now, things are changing. Stories are returning to the forefront.

"When storytelling becomes finessed, details become naturally specific. When you have to tell a story about a family, you can't tell it without describing their courtyard, how they gather on the terrace, or the town they live in."

Praising films like Badhaai Ho (2018) and Dum Laga Ke Haisha (2015), the actor said, "A good example is Badhaai Ho. The film, without any major stars, was a huge success. In fact, [Ayushmann] Khurrana's position in the industry is because of out-of-the-box stories. He may do commercial films in the future, but he will be remembered for Article 15 (2019), Dum Laga Ke Haisha (2015)."

The reason is also the growing accessibility of good and international cinema. Malhotra said, "When Netflix, Google came into play, people started watching foreign cinema. You have different things to watch and at your hand. My domestic help recently told me about an English film, dubbed in Hindi. Now, remember he does not know what a screenplay is. Yet one day he was telling me, 'Our films are 2–3 hours long, but they only make 1–1.5 hr-long films. But every character is memorable and the story is completed.' What he meant was that the screenplay is good."

Few understand this phenomenon of changing tastes like Pavan Malhotra. The actor broke through at the fag end of the heyday of Indian cinema's independent movement. Having worked with directors like Saeed Akhtar Mirza, Buddhadeb Dasgupta and, more recently, Anurag Kashyap, he understands the difficulty of going against the grain. Yet, the changing perception fills him with optimism.

"For instance, Salim Langda was a hit back then. Yet, that was 10–15% of the population watching it. Now that number has swelled to 30–40%," he said. "People are at home. They are exposed to foreign cinema, series. The more you watch, the more your taste improves. Of course, one form of cinema is to offer an escape from reality. We enjoy it. After all, WWE is choreographed and people watch it."

With pandemic restrictions easing, the actor is optimistic about the future. Quizzed about upcoming projects, he shrugged nonchalantly. "I have four or five projects which depend on when the producers get the dates and if they release them on OTT or in theatres," he said. "All I promise is that every single one of them is different. Each character is different.

"As an actor, I feel everything should be different. I have another shoot in November. But for any project, you never know until it is done."