The veteran actor speaks about his first role in the digital medium in the SonyLIV web-series and also looks back on his career.

Gulshan Grover in Your Honor (Season 2)
give your opinion

Gulshan Grover played himself in the British comedy web-series Badman (2015). But the second season of the SonyLIV web-series Your Honor is the first time he is playing a fictional character in a digital production.

Talking about the series, Grover told Cinestaan.com he had been choosy about doing web shows. “I was offered at least 50 series before this one,” he said. “I refused them all. I agreed to Your Honor because I liked everything about it.

“I was impressed with its emotional story about a father’s struggle to save his son. Every parent would do that; including me and you. The people at Applause Entertainment think a lot before making a series. Sameer Nair and Applause have given a new direction to OTT. They bring out new ideas and put their money on it. And SonyLIV has been coming up with good content one after the other.

“On top of that," he continued, "I have a zabardast [incredible] role. E Niwas is an old friend and a National award-winning director. It has Jimmy [Sheirgill], Mahie Gill along with senior actors like Mita Vashisht and young actors.” 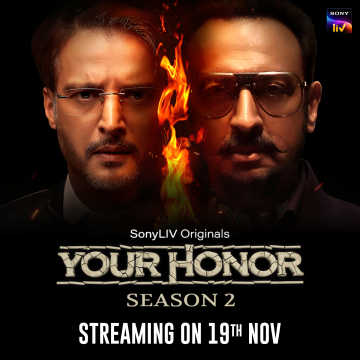 Your Honor is adapted from the Israeli show Kvodo. The first season was about how an honest district judge, Bishan Khosla (Sheirgill), is forced to take the law into his hands to save his son Abeer (Pulkit Makol) after the latter kills a gangster's son in a hit-and-run incident.

Grover’s character, which is a new entrant in the show, is called Gurjot Pannu. “He has come from Canada,” said the actor. "You can say he is a not-so-good person (laughs) whose main aim is to put his interests and benefits above the rest. He benefits from other people’s troubles and emotions. I am brought in this season to make things more difficult for [the character of] the father.”

Grover worked with Sheirgill for the first time 20 years ago in Yeh Zindagi Ka Safar (2001). Following this, they have shared the screen every few years. Their last outing together was Tigmanshu Dhulia’s Bullet Raja (2013). “Jimmy is a very good person," Grover said. "He is very respectful and as an actor he is sincere. I like working with him.”

Asked about the differences between his first proper web-series and shooting for a film, he said, “It was challenging because the kind of acting you do is different and so is the style. Plus, it is longish. But I enjoyed every moment of it. It was such fun that we used to be in splits because the director, Jimmy and Mahie are friends. The young actors also became friends.” After a pause, he added, “Actually it was me who made people laugh on the sets.”

Grover, who has been in the Hindi film industry for over 40 years now, says his criteria for choosing projects have changed with time. “Earlier it was to sign anything and get a chance to act,” he said. “Then there was a phase where I felt I should earn more money to buy a house of my own rather than living on rent, and buy a car. Then there was an eagerness to work with big actors and directors.

“Once I got settled, by god’s grace, the criteria were a fantastic role, important character, working with people who are fun and a good director,” he added.

Grover is part of the recently released Akshay Kumar-starrer Sooryavanshi (2021), which has done quite well at the box office. Speaking about the response to the film, he said, “This will benefit not only Sooryavanshi but the entire industry. It will open doors for other films and bring back audiences to cinema halls.”

Sooryavanshi is being followed by a long list of big-ticket films. Asked If theatres being flooded by audiences again would diminish the value of OTT shows, Grover responded, “Both will co-exist. Both will work like hybrid cars which run on petrol and electricity. Theatres and OTT platforms can never replace each other. When theatres were shut, it felt like OTT will rule. But that won’t happen. They will have to work together.”

Your Honor (Season 2) will be streamed on SonyLIV from tomorrow. Following this show, Grover will be seen in movies like Cash and No Means No.