Filmmaker Aparna Sen recalls her acting debut in Samapti, one of the three segments in Ray's anthology film made as a tribute to Rabindranath Tagore in the Tagore centenary year.

Satyajit Ray’s birth centenary month also marks the 60th anniversary of the release of his Bengali anthology film Teen Kanya (1961), through which the legendary filmmaker paid tribute to Rabindranath Tagore in Tagore's birth centenary year by adapting three of his short stories — Postmaster, Monihara and Samapti.

Tagore’s humanist vision inspired Ray’s perspective on life and art, and the director later also adapted the Nobel laureate's short story Nastaneerh into Charulata (1964) and his novel Ghare Baire into a film of the same name in 1984.

Teen Kanya also marked the debut of Aparna Sen, who not only went on to become a celebrated actress, but also one of the more important filmmakers of the post-Ray generation.

Sen featured as the feisty and carefree village girl Mrinmoyee, who aches at the loss of her freedom after getting married to Amulya (Soumitra Chatterjee) but eventually surrenders to her feminine impulse and the man who genuinely loves her.

The three short stories in Teen Kanya revolve around female protagonists who challenge the conventional male gaze. Of the three, Samapti (The Conclusion) is a love story and also the most light-hearted.

Speaking to Cinestaan.com, Aparna Sen shared her memory of being cast by the master filmmaker and a precious moment from the shoot that she holds close to her heart. Excerpts:

We know Satyajit Ray was one of the closest associates of your father Chidananda Dasgupta and hence he perhaps didn't have to look for many options before he chose you to be his Mrinmoyee. However, we would still like to know what in particular made him choose you for the character of a carefree teenage girl with a mind of her own? Did he have to prepare you, brought up in an urbane educated space, separately for the role of a simple yet nonconforming village girl?

Yes, my father and Satyajit Ray were friends, but that was not why Ray thought of casting me. He already had a girl in mind for Mrinmoyee's character. Her name was Sukriti Tagore. However, her family objected and he started looking for someone else. That's when his wife Bijoya Ray suggested that he consider Chitu's daughter, Chitu being my father's nickname.

Why did he choose me? Well, I was the right age, I suppose, at 14, and Manik-kaka [Ray] and Monku-mashi [Bijoya Ray] had seen me at many family gatherings. He just called up my father one afternoon and asked if he and my mother would agree to my acting in a film on Tagore's centenary. I would have to take a film test before that, of course.

I thought I would be expected to act or at least recite a poem for the film test, but it turned out to be fairly simple. My hair was pulled back into a bun and I had to wear a striped handloom sari the old-fashioned way, without a blouse, and a nosepin was stuck on my nose. I was asked to look up and down and sideways so that the director could check out all my angles, and that was that!

The next thing I knew was that my mother and I would be travelling with Ray's unit to a village called Neemtita where the filming would take place. I would have to miss my third terminal exam at school — I was in class eight then — and due permission was taken from the school authorities.

Ray didn't prepare me at all. I was quite a tomboy in any case, and adept at climbing the many trees in the garden at our home in Kolkata. 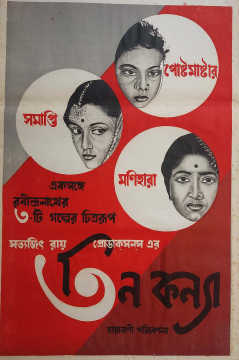 Do you recall any special moment with the director during the shooting of Samapti?

Most of the time, Manik-kaka used to give me very precise instructions like 'frown!', 'look down,' 'look up', etc. I obeyed him implicitly, but sometimes, even at that tender age, the actor in me would wish wistfully that I be allowed to act instead of just doing what I was told.

One day I got the opportunity to act on my own. I was supposed to have Charki, my pet squirrel, in my hand and show it to my friend Rakhal through the bars of a window in their house. Usually, Charki would never stay still. It — I never got to know Charki's gender — would slip out of my hand at the first opportunity. That day, for some reason, it stayed put in my palm. At that time, I was very conscious of film wastage and tried very hard not to have a shot rejected for some fault of mine. So I pretended I was eager for Rakhal to see my new acquisition and placed it on the inner window sill. When Charki slipped away from there into the room, I pretended to suddenly notice its departure and rush into the room where Rakhal's sister was being shown to Amulya (Soumitra Chatterjee) as a prospective bride and turned the room upside down looking for my pet. 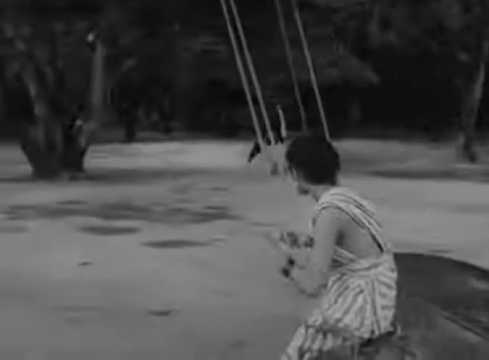 The shot was up to the point when I rushed away from the window. When the shot was cut, I remember Bansi-kaka [Ray's art director Bansi Chandragupta] shaking his head and saying "Holo na. holo na!" meaning the shot didn't work. But Manik-kaka was laughing. He stuck his head out from behind the camera and said, "I rather liked it!" So that was that. The shot was okayed and retained in the film. That was my moment of triumph and I never forgot it!