Nagaland is where you see a tattoo-faced hunter sitting next to a guy in a Guns N Roses T-shirt: Theja Rio


His short film Angh, an intergenerational story, looks at the coming of Christianity to the region as a moment of displacement and loss.

Writer-director Theja Rio’s short film Angh is an intergenerational story set in a village in Nagaland at a critical juncture in its history. The film follows the journey of a father, who is a head-hunter, and his son as they grapple with the decision of converting to Christianity. While the father tries to hold on to the old ways, the son wishes to belong to a community and finds himself gravitating towards conversion.

Angh review: Charting the historical demise of a way of life

The 26-year-old started out as a screenwriter but becoming a bit possessive about his scripts, opting to direct them as well instead of getting anyone else to interpret his vision. In 2017, he directed a short film, Checkpost, and then directed an Italian short film on 35 mm, which is being edited. In 2019, he directed Angh, which was inspired by a chance encounter, when Rio was working on another film, “A couple of years ago, I went to the Indo-Burma border [Mon district] for another project and this region [where they shot Angh] is a few hours away from the capital and despite being from the same state, it was a cultural shock to me…to go back there and see the place. It was very interesting for me and it was almost like time travel back to the past, with thatched houses and tattooed faces but at the same time, Christianity has been so widespread there.”

“When we were shooting the documentary there [another film] they were building what will apparently be the biggest church in Asia in that district. It was like a place where transition happened too fast for the people from being head hunters to suddenly transitioning to modernity. At the same time, I found this very tragic so, I wanted to make a film about that.

A little-known fact is that Nagaland has become the most baptised state in the world, in terms of the percentage of people. But the film looks at the coming of Christianity as necessitating an almost sudden change which was a drastic break from the traditional order. “I started noticing the trend with younger people who are almost going back to their roots [now], so it’s almost a U-turn for the youth to rediscover the culture and…the more we got exposed, the more we started appreciating where we come from, where our roots are. So I think now, people like me and people from our generation are going back to it [tradition] and we are slowly noticing the flaws … in how Christianity came in and how it is responsible for the demise of the whole tradition, culture…I think, the more exposure we had, the more it triggered a return to our culture,” explained Rio. 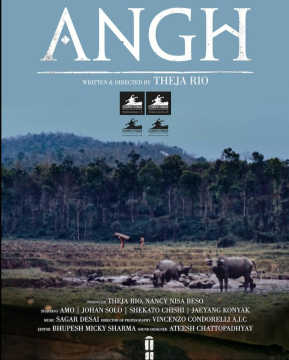 The decision to shoot in the 16 mm format was made even before the pre-production stage. Describing what led to the decision, Rio said, “16 mm is glorious and visually satisfying and this being a period film, we thought that shooting the story on film would capture the story in a most authentic way. It would look nostalgic and capture the time period, better than what digital does so that was a very visual decision that we took very early on.”

However, the choice of the medium brought its own, rather unexpected, challenges, “The main struggle after we filmed was when we took the film stock to the airport and even though we had the letter from Kodak saying that the film did not have to be X-rayed, the airports here are not familiar with film shooting so they did not allow us to take it so we had to take it to a lab in Mumbai via train, keeping it cool in the AC. This was not something we were expecting and the process took a few days.”

Shooting the film posed a logistical challenge as the equipment had to be brought in from Mumbai and filming in the wilds of Nagaland came with its own set of obstacles. “We constructed the whole village that you see, so we had the liberty to burn it down! The hard thing we faced on set was that on the day we had to shoot, there was a forest fire, so we had to fight that, and the set almost went down in ashes!”

The theme of modernity vs tradition resonates with Rio who is fascinated by the interplay between generations and their ideology. “I am from Nagaland and I live in the city and there’s this conflict in my own life as well. Traditional and conservative people would think that I should come back and live here and work here,” he said. But having lived in the cities has meant that another kind of life beckons him as well.

Rio has completed a documentary, Lost in Transition, which is a sister project to Angh. An intergenerational story, it follows an old man from the head-hunter generation, along with a younger man, who is a guitarist with a heavy metal band, both from the same region. “There’s a huge contrast [between the two]. I told the producers that Nagaland is one of the very few places in the world where you will face a tattoo-faced hunter sitting next to a guy wearing a Guns N' Roses T-shirt! The contrast is so rich.” Besides this, Rio is also writing a horror film set in the same region, which takes places in the 1970s, when head-hunting was last recorded.

Angh is being screened as part of the Indian Film Festival of Los Angeles.