Sumitra Bhave was a Bodhisattva: Anjali Patil on her Dithee director


Patil speaks about the contentment, philosophy, and experience of working on the late filmmaker's swansong, Dithee.

The last time I spoke with Anjali Patil was in her breakthrough year with Newton (2017) and Kaala (2018) on the horizon. Four years down the line, the world seems to have turned upside down. The actress, though, is unfazed.

"We really don't know what is going to happen tomorrow," she said. "I don't know if I am going to be alive in the coming weeks. I want to make sure I create and do things, whether they come out or not. There is an urgency to live, to love, to laugh as much as possible."

One thing that has come out, and hit audiences hard, is Dithee (2021). Directed by the late Sumitra Bhave, the film deals with the philosophy of loss, grief and coping with it. "Dithee is talking about life and death, and people caught between these forces," Patil said. "It also offers tremendous healing. You will be drenched in the shower of healing, as we were when making the film."

Dithee was released on SonyLIV's OTT platform on 21 May, after a long delay caused by lack of funds, theatre availability and a pandemic, among other things. It also arrived in the shadow of Bhave's absence. The award-winning filmmaker died on 19 April 2021.

"She was my grandma, my girlfriend, my mentor," said Patil of the director. "Everything I wished to be as a female artiste, she personified those things."

Sumitra Bhave: Our films have won several awards, but most Indians haven't seen any of them

As lovely as she was, Bhave was also prescient in capturing stories that foreshadowed underlying societal issues. Dithee's evocation of grief in a pandemic-stricken India feels particularly relevant. "I keep saying this, but it is true. I look at her as a Bodhisattva," said Patil.

Despite the lockdown, Patil has been creatively busy. Having made her debut as producer with the NYIFF selection A Loose Long Shirt, the actress has also directed a documentary, Neither A Girl Nor A Woman, and is working on a script.

"I have been working for a long time with very curated, handpicked films and a curated life," the actress remarked. "Now, actual work seems to be happening." Excerpts from the interview:

How have you been?

I have been all right. I am trying to keep myself mentally and physically healthy so that I can take care of myself and those around me who need it.

Tell us how Dithee happened. How did you join the project?

With Sumitra maushi [a term of endearment in Marathi meaning aunty], it was a divine connection. I go back and forth to Tamil Nadu, Tiruvannamalai, where I study philosophy. I was just back and Sumitra maushi called, saying, "There is a film I am doing, we don't have any producer. I see you in the film. It's just a two- or three-day work schedule." She told me it is based on this book, which in turn is based on Advaita philosophy. I simply asked, "When and where should I be?"

There was a personal need. I went not as an actor, but to be there without any greed. It was Sumitra Bhave. I know everything she does comes from a higher state. To be part of it was an honour. I cannot measure the impact of it in materialistic measures.

We first met 15 years ago when I was in drama school in Pune. I was 17 probably and she said, "One day we will work together. I am sure of it." The moment came now with Dithee.

When I reached [the location], I got to know all the other stalwarts who were part of it. I was like this little ant who had got its hands on a big piece of jaggery.

Absolutely amazing cast! I did not know how to consume this, where to start. I was just happy to be there with them.

It strikes me that Sumitra Bhave's greatness lay in picking stories that grow in relevance as time passes. Dithee's delay has allowed it to be released at a time when everyone in the world is trying to cope with loss and grief.

Absolutely. It is absolutely right. That is how she always was. She lived as a human being absolutely connected with the vaishvic [universal forces]. In absolute harmony, symphony, with the forces around us.

Sumitra Bhave (1943–2021): Filmmaker who continued her social work through cinema

Dithee is talking about life and death, and people caught between these forces. It also offered tremendous healing. You will be drenched in the healing shower, as we were when making the film.

These are all divine connections. I keep saying this, but it is true. I look at her as a Bodhisattva, who did films that are very relevant, subtle, and talked about conflict and emotions which will never be talked or seen the same way.

It must be tragic that the film also arrives with the loss of Bhave herself.

Yes and no. When I heard the news, it was a physical loss. The loss of form was there. She was my grandma, my girlfriend, my mentor. Everything I wished to be as a female artiste, director, she personified all those things.

We would often talk like two girls. I would ask her, "How do you remain so soft and vulnerable, yet so strong? How do you handle all these actors?" Three or four days after her passing, all the people who were connected with her started to call each other and share these things. 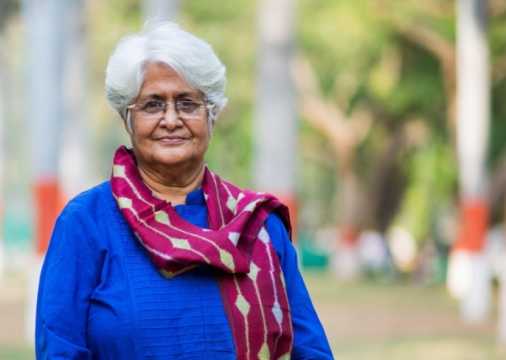 At the same time, I know, she has come closer to me. She is now very close to me. Kishore (Kadam) dada and I were talking. We exchanged our emotions, about how we feel and where we could find her. He told me something beautiful, that in the most intense moments, he knows he will hear her.

I understand, and I know that too. When I need my clarity or do something which is not absolutely authentic, I will hear her voice questioning me. In that way, I have a very different relationship with death as well. There is a loss of the form, but she is going to be here. Through the films, and the goodness she has brought us. Everyone she met, she touched in some way. This is not just something I say. I know this. As first-hand experience, I know this.

A film like this often shapes the artistes' own experience on set. Talk to us about that. Going through such an emotional arc is bound to show up even behind the camera.

We were in this spiritual zone on the set, even though I would hate to call it a set. We were in actual locations. Going from one location to another. We were like Warkaris ourselves, like a pilgrimage.

I was there for a very short period, three or four days. Even when I was not shooting, I was happy to be sitting there, watching them work, talking to one another. Even though there was a big age difference, I was probably the youngest of the group, everyone was on the same page. It was not like a film at all. It was like living.

When I finished the shoot, I was glowing. It is different. You are changed. There are no hierarchies on Maushi's set. The guy who was giving all of us chai was an architect who was assisting her. One of the assistant directors, Chinmay Damle, is an IIT professor who teaches at IIT Madras. He came all the way to assist her.

We had no money. When Mohan sir [Agashe] came on board as the producer, he would joke about it. We met on the set of another project, Hutatma (2019), and he would say, "So, now I am the producer, I have to send you money. Tell me, how much do you want?" I would tell him we needed the money for the film. I never needed the money for myself. You can use the money for something else. In the end, Maushi also gave me a letter, which, when I brought it back home, my father went and got it laminated. I can't explain the value of being around her, or around those people. They have lived. It is like a sadhana [discipline].

You have been incredibly busy yourself.

I have been busy, working in multiple capacities. I acted in and produced a short film, Loose Long Shirt, by Mitali Joshi. It has been selected for the New York Indian Film Festival.

I also directed a film in December, a documentary, Neither A Girl Nor A Woman. In 2020, I had to shift gears and come into direction and writing. There was a concept I was working on for three or four months. Finally, we shot. The film is almost ready now, and by June-end it could be finished, and start on the festival circuit. It talks about a spectrum of womanhood, where we don't know where we belong. It is a gender study documentary.

I have also written a script. Right now, it is in its fourth draft. I will be directing, probably next year. There are some acting projects, one is an international film. I just need to see how that shapes up after the pandemic.

In all, it has been a creatively active year.

I have been working for a long time with very curated, handpicked films, and a curated life. Now, it feels that actual work is happening.

I think this entire pandemic and lockdown have also given a lot of hope and push in a different way. We really don't know what is going to happen tomorrow. I don't know if I am going to be alive in the coming weeks. I want to make sure I create and do things, whether they come out or not, I don't care, but there is an urgency to live, to love, to laugh as much as possible. To experience life, not just as toxic positivity, but in all its flavours. I don't want to shy away from anything anymore. If it is mediocre, I don't care. I just want to live it.