Division is a human problem, not just an American problem: Ben Rekhi


American filmmaker Rekhi speaks about his latest project, The Reunited States, which looks at individuals from all walks of life trying to bring together those separated by race and political affiliation.

Ben Rekhi’s poignant documentary, The Reunited States (2021), opens with Susan Bro consoling those gathered to mourn the death of her daughter Heather Heyer, who was run over during a protest after a white supremacist rally in Charlottesville, Virginia. The grieving mother is now speaking out for the same beliefs that Heyer held.

Political divisions and racial tensions were at their peak in the US after Donald Trump was elected the 45th president in 2016, and Rekhi is among those who have been examining how the rookie politician got elected.

“A lot of us were trying to navigate this new reality and figure out how our work could help shed new light on what was happening,” he said. “Initially I had done a [documentary] series called The Hidden Vote that was about minorities who support Trump. And it really taught me the power the media has to see and hear each other better, and to spotlight these type of stories, to walk in someone else’s shoes, and that led me to this project, where it seemed like the country was pitted against itself. Everyone was so passionate and so full of anger, it seemed like we were all suffering in the long run.”

Rekhi added that he was really inspired by the actions of Bro, who he felt was able to talk about the need for difficult conversations to avoid further violence. He decided to begin his next project about this gaping divide in America by filming with her.

“As a filmmaker, I was really intrigued with how media has been used to divide us, but it can also be part of what brings us back together,” he said. “This idea of urgent cinema is trying to identify stories that speak to our times and challenge where we see ourselves and the world around us. Urgent cinema is something that has been most inspiring for me.”

The title of the documentary comes from the book, The Reunited States of America: How We Can Bridge the Partisan Divide, by Mark Gerzon. Rekhi wanted to use the title for his documentary, and when he googled it, it took him to the author. The filmmaker took it as a sign from the universe and asked to meet Gerzon.

"He has been studying these bridge-building issues for 30 years, ever since the end of the Cold War," said Rekhi, "and asked me, how did you find me, I’ve been waiting for a filmmaker to approach me on this topic for a long time, and I told the story of the title and googling him and he looked at me and said, ‘Well, then it’s meant to be, let’s work together!' "

Through Gerzon, Rekhi got his other subjects for the documentary — independent political candidate Greg Orman, political entrepreneur Steven Olikara who founded the Millennial Action Project (MAP), and Republicans David and Erin Leaverton, who take their family across America in an RV to know the mood of the country.

“Gerzon, in his book, talked about 40 different people bridging divides and we wanted to find people who were doing it now,” the filmmaker said. “I constantly consulted with him. It was important to show multiple different storylines just to portray that there is not only one way to bridge this divide. There's many different solutions.”

Rekhi began working on The Reunited States in August 2018 and was working on the film’s edit during 2020. “The pandemic ended up being a blessing in disguise for the project because it really allowed me to think and make the film speak to the heart more than the mind," he said. "Everyone has been going through a difficult time in the world. The world has had some challenges over the past year that we have all faced, so it was really important to speak to this moment where people are in their lives.”

Asked what some of the ways to bridge the divide are, Rekhi answered that it would not be easy as there are many challenges ahead. He said, “It’s hard for a lot of people to find a way through this and say we can put the past behind us and move on, but the one thing to remember is that most of what we are seeing in the news is the extreme voices on either side of the aisle. It’s the ones that are the most infuriating that get the most attention because it sells advertising and it leads to us getting engaged.” 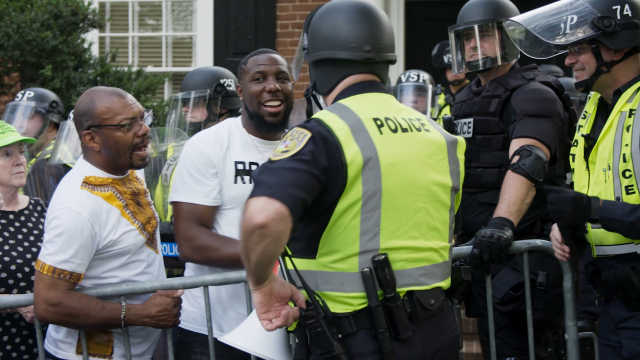 He added that most people want to move past this toxic division but don’t know how. The most important thing, according to Rekhi, is not to change other people’s minds but to understand where they are coming from. We have to genuinely try and understand one another.

“I do think that the younger generation gives hope because they are growing up in a society that’s more inclusive and less likely to hold on to these partisanships of the past," he said. "But the hope is that the arc of history bends towards justice and eventually we’ll get there even if it’s two steps forward, one step back.”

The Reunited States is now available in North America on platforms like iTunes, Amazon Prime Video and YouTube and via cable on demand. Rekhi is working towards bringing the film online to India as well in the near future.

The documentary has resonated with many who have cut off friends or family over political disagreements. Rekhi shared that he had received many messages from audiences saying they were going to attempt to reconnect with them. But he has also received a lot criticism over The Reunited States.

He said, “We’ve gotten pushback from the left media and the right media, saying this film is trying to say we should get along with the enemy, these people are destroying the country. Then others are saying, this is like an agenda, they are trying to brainwash us. I didn’t think saying something as simple as hey, we should listen to each other, was going to be controversial, but it is. And the fact that we are upsetting both sides of the aisle must mean that we’re doing something right.”

Working on the documentary also helped Rekhi figure out his own biases going into the project and he felt everyone has their own journey of doing so.

Interestingly, the documentary is executive produced by CNN anchor Van Jones and Meghan McCain, daughter of the late senator John McCain of Arizona. Both have different political views, but Rekhi says they came together to co-present the film because of the message it would send.

Rekhi also said that beyond the documentary, the makers were looking at a television series about politically divided families. “It’s not just political, it’s very personal, and it’s shredding the fabric of our society," he said. "Like I know, in India, it’s also such a really difficult time with people personally between family members. That’s the part that’s most important, to make sure those personal relationships, they can be strained over time, but they can’t be broken because that can lead to a much bigger problem in society.”

While the situation in America is a national issue, the rest of the world is also looking at the global power to see how it sets its house in order. “Division is a human problem, it’s not just an American problem,” Rekhi said. “The biggest theme that we wanted to run through was that divisions run through every human heart. We all have the capacity to reunite or divide and it’s not only up to our governments to fix these problems, it’s up to us because the elected officials are downstream to us.

“We do face a lot of challenges as global citizens, and the pandemic has only made us look more inward instead of outward, and become more focused on our own national issues,” he continued. “But, ultimately, this is a very trying time and out of these challenges usually come opportunities. And so, for me, it’s looking at these difficult times and tragedies as moments of growth and change that can lead to a better world.”